Mason Greenwood and Eric Bailly will return but Marcus Rashford will be unavailable when Manchester United take on AC Milan in the UEFA Europa League.

Manchester United will be aiming to take a step closer to the quarter-finals of the UEFA Europa League when they play hosts to AC Milan at Old Trafford in the Round of 16 first leg. And, Ole Gunnar Solskjaer has a fresh injury concern hampering his preparations ahead of his side’s latest fixture.

Marcus Rashford is the major absentee for Manchester United after limping off against Manchester City this past weekend. In addition, the likes of Edinson Cavani, David de Gea, Phil Jones, Juan Mata, Paul Pogba and Donny van de Beek also remain unavailable for the Red Devils ahead of the visit of AC Milan. Solskjaer did provide an update on Rashford and others in his pre-match presser.

“I don’t think he’ll be available for tomorrow. He’s still getting treatment but he didn’t join in the training today. Even though normally I’m a very optimistic guy, I still think he’s going to be out tomorrow night and a doubt for the weekend.”

In the continued absence of de Gea, Dean Henderson’s extended run in the side will continue, with Manchester United lining up in a 4-2-3-1 formation in front of the Englishman. The defensive line is likely to see a couple of changes, with Harry Maguire and Aaron Wan-Bissaka retaining their spots.

The rotation between Eric Bailly and Victor Lindelof will continue on Thursday, with Bailly starting at the heart of the Manchester United defence against AC Milan. On the left flank, Alex Telles ought to start, with Luke Shaw being given a well-deserved rest.

Up ahead in midfield, Nemanja Matic should be recalled, with Scott McTominay dropping to the bench. The Serb will, therefore, pair up with Fred in the double pivot, considering Pogba and van de Beek are still on the sidelines. Meanwhile, Bruno Fernandes is a certainty in the no. 10 role. 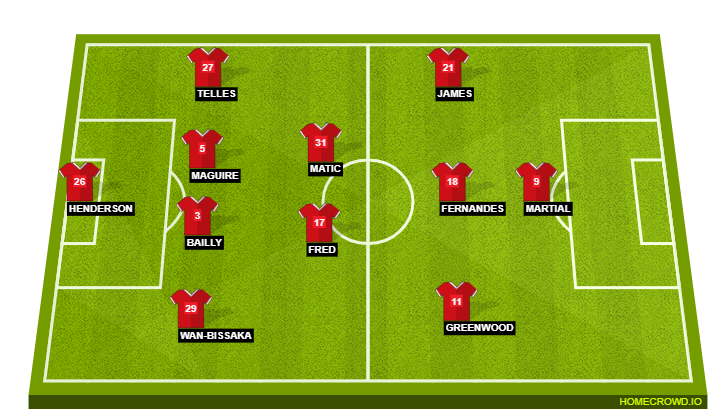 Rashford’s absence has left the Manchester United down to its bare bones, meaning Mason Greenwood ought to return. Greenwood will start on the right flank, with Daniel James moving to the left wing, while Anthony Martial will lead the line against AC Milan.