Anthony Martial and Eric Bailly are set to return, but Victor Lindelof is likely to be rested when Manchester United take on Crystal Palace on Wednesday.

Manchester United will be desperate to return to winning ways when they lock horns with Crystal Palace at Selhurst Park on Wednesday night. And, Ole Gunnar Solskjaer does not have any fresh injury concerns to contend with ahead of his side’s latest fixture.

There is some good news, though, with Edinson Cavani back in training and in contention to feature. However, the likes of Phil Jones, Paul Pogba and Juan Mata remain on the sidelines with their respective injuries, with the absence of Pogba being particularly concerning.

Solskjaer did provide an update on both Cavani and Pogba during his pre-match press conference, saying, “Yeah, we’ve had a training session this morning. Of course, it was a light one. We’re looking okay. There are a couple of doubts for tomorrow that we have to give as much time as possible. Edinson trained, he’s joined in, that’s good.”

“Let’s hope there’s no reaction after the session. Hopefully, he will travel with the squad. Paul is still not ready for us, no. He’s feeling better. He’s not been training with the team yet, so he’s definitely not travelling down to London, no.”

With Pogba still unavailable, the choice in the midfield double pivot will be between Fred, Nemanja Matic and Scott McTominay. Among the three, it is McTominay who is likely to be benched as a means to get a breather ahead of the Manchester derby this weekend, meaning Matic and Fred will form the double pivot.

Up ahead in attack, Bruno Fernandes and Marcus Rashford are certainties, with Anthony Martial also set to come in after being benched last time out against Chelsea. Martial should lead the line for Manchester United against Crystal Palace, with Mason Greenwood starting on the right flank ahead of Daniel James. 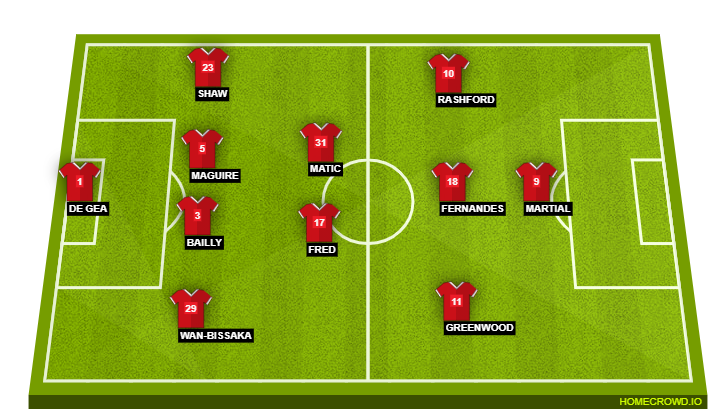 Finally, in defence, only one change is expected, with Eric Bailly expected to come in for Victor Lindelof, whose minutes continue to be managed, especially with one eye on the derby. Bailly will pair up with captain Harry Maguire at the heart of the Manchester United defence, with Luke Shaw and Aaron Wan-Bissaka being the two full-backs, whereas David de Gea will be stationed in goal.