Ben Davies and Ozan Kabak are set for their debuts while Fabinho will miss out when Liverpool take on Leicester City on Saturday.

Liverpool will be desperate to return to winning ways when they lock horns with Leicester City at the King Power Stadium on Saturday afternoon. And, Jurgen Klopp has a fresh injury concern to deal with ahead of his side’s latest fixture.

While the likes of Virgil van Dijk, Joel Matip, Joe Gomez, Diogo Jota and Naby Keita remain on the sidelines, Fabinho is also unavailable to take on Leicester due to a muscle injury. In fact, during his pre-match press conference, Klopp provided an update on the Brazilian, while also speaking about possible debuts for Ben Davies and Ozan Kabak.

“Fab will not be available. He suffered again a little muscle issue, so will be out for this game. I don’t know in the moment [when Fabinho will return], we will see. I really don’t know. With the boys, obviously we had now some sessions together where we really could work on this defensive set-up and that’s very, very important.”

“But we have, as well and on top of that, other players available – Nat Phillips did really well, together with Hendo [and] together with Fab. We have to find a solution and all of them had the chance this week to show in training who is ready. So, I have to make a decision tomorrow, obviously.”

Fabinho’s return means Kabak is the likeliest to start at the heart of the Liverpool defence. In addition, Davies is also likely to make the starting lineup, with both the centre-backs making their debut for the Reds on Saturday.

Out wide, Trent Alexander-Arnold and Andrew Robertson pick themselves, while Alisson Becker will be stationed in goal, looking to redeem himself after the disastrous performance last time out against Manchester City, which saw Liverpool’s struggles this season continue.

Up ahead in midfield, the big change will see Jordan Henderson reprise the holding midfield role he favours, seeing as Davies and Kabak will be making their Liverpool debuts. Henderson will have Thiago Alcantara and Georginio Wijnaldum for company in the middle of the park, meaning Curtis Jones drops down to the bench. 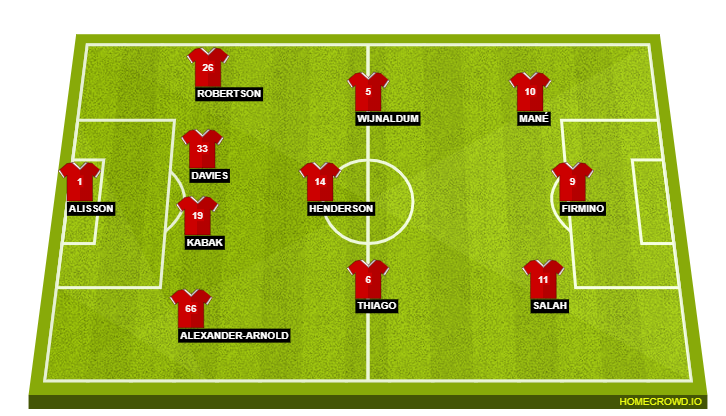 Along with Jones, James Milner and Alex Oxlade-Chamberlain will also be backup midfield options. Finally, in attack, there is no looking past the first-choice trio of Mohamed Salah, Roberto Firmino and Sadio Mane, meaning Xherdan Shaqiri and Divock Origi will be options on the bench.