You are here: Home » news » Predicted Manchester United lineup against Arsenal: Cavani in for Martial; Shaw to return
Football News 24/7

Edinson Cavani ought to replace Anthony Martial while Luke Shaw will return when Manchester United take on Arsenal on Saturday.

Manchester United will be desperate to bounce back to winning ways when they lock horns with an in-form Arsenal at the Emirates on Saturday evening. And, Ole Gunnar Solskjaer has been handed a boost on the team news front ahead of his side’s latest fixture.

Victor Lindelof is back in contention after missing the game against Sheffield United, while Eric Bailly should also be at the disposal of the Manchester United boss, who ought to have a near-full strength squad at his disposal against Arsenal. In fact, Solskjaer did provide an update on Lindelof during his pre-match press conference and his persistent back problem.

“Well, I think it’s been getting better and better. It’s a quick turnaround of games, especially now if there’s only a two-day gap in between them, sometimes we have to wait to the last minute to make a decision on Victor if he’s fit and available. But he’s improved and hopefully we don’t need any operation.”

Lindelof should return to the heart of the Manchester United defence against Arsenal, with captain Harry Maguire a certainty in the centre. Luke Shaw is a certainty to return as well, with Alex Telles making way on the left flank. On the opposite wing, Aaron Wan-Bissaka is an automatic pick and so is David de Gea in goal.

Up ahead in midfield, Fred and Scott McTominay will likely pair up in the double pivot, as has been the norm in the bigger games for Manchester United. That means Paul Pogba will be stationed on one of the two flanks higher up the pitch, with Marcus Rashford being the other wide man.

Bruno Fernandes, who recently completed one year at Manchester United, picks himself to reprise the no. 10 role against Arsenal, but there are question marks looming over the participation of Anthony Martial following a dreadful showing against Sheffield United. Solskjaer, though, gave his backing to the Frenchman.

“Yes, he’s missed a couple of chances, that happens to everyone. It’s just being ready, for example tomorrow, when the chance comes. Just be mentally ready, don’t be frustrated. I’ve been there myself when you go through patches where you don’t really score. He keeps practising in training and he keeps doing it here, so we know how good he is and we know he’ll come good.” 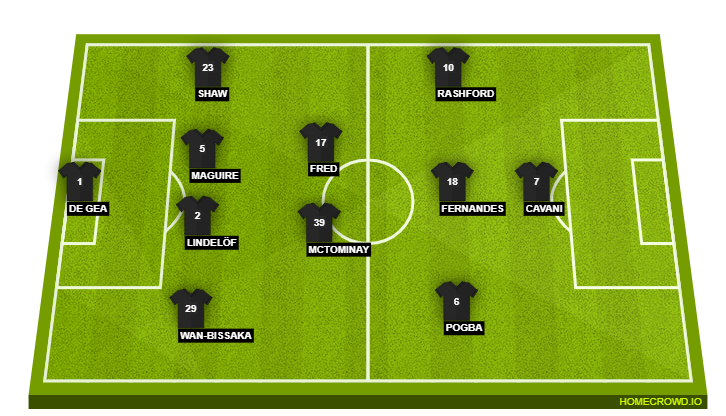 Despite Solskjaer’s seal of approval, Martial should drop down to the bench, with Edinson Cavani spearheading the Manchester United attack at Arsenal. That means Martial and Mason Greenwood will be options on the bench, along with Donny van de Beek.