Kieran Tierney is set to return but Pierre-Emerick Aubameyang will miss out again when Arsenal welcome Manchester United to the Emirates on Saturday.

Arsenal will be eager to continue their fine run of form in the Premier League when they play hosts to Manchester United at the Emirates on Saturday evening. And, Mikel Arteta has received a timely boost on the team news front ahead of his side’s latest fixture.

The Arsenal manager has no player left in the treatment room, although a few are still making their way back to full fitness. One of these players is Kieran Tierney, who has taken part in training ahead of the game and is in contention to feature. Pablo Mari and Dani Ceballos, though, need a little more time to be fit enough to start games.

During his pre-match press conference, Arteta gave a general team news update, including one on Martin Odegaard as well as Pierre-Emerick Aubameyang. The Arsenal boss said, “I don’t know, we had a day off yesterday. We will be training today and will see how everyone is. I think Dani Ceballos will be training with the squad in the next few days, Pablo Mari probably as well.”

“Obviously Martin Odegaard will be joining us as well and for the rest we have to see how Kieran is. I think that’s it. I don’t know. I spoke with him [Aubameyang] yesterday and things are looking better at the moment but we’re going to have to wait and see.”

Aubameyang could miss out yet again due to the personal reasons that have forced him to skip the last two Arsenal games. In his stead, Nicolas Pepe should once again start on the left flank, after an impressing showing earlier this week against Southampton, although Gabriel Martinelli will be an option as well.

On the opposite wing, there is no looking past Bukayo Saka, who has established himself as Arsenal’s talisman this season. Alexandre Lacazette will lead the line for the Gunners against Manchester United, while Emile Smith Rowe should be fit to start despite Arteta being coy over his and Thomas Partey’s availability during his presser. 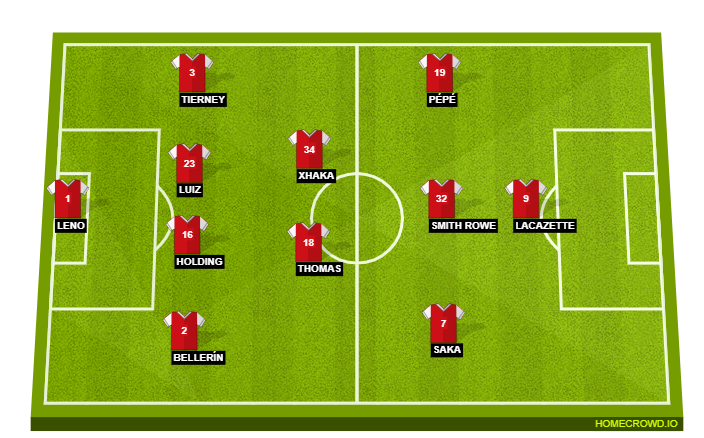 Like Smith Rowe, Partey should be fit to start, taking his place in the midfield double pivot, where he will have former Arsenal captain Granit Xhaka for company. At the back, Tierney ought to come in for Cedric Soares, with Hector Bellerin, Rob Holding and David Luiz retaining their spots. Finally, in goal, Bernd Leno is an automatic pick.

One Response to “Predicted Arsenal lineup against Manchester United: Tierney to return; Aubameyang misses out again”