Sergio Ramos is fit to start while Karim Benzema and Vinicius Jr. are set to return when Real Madrid take on Barcelona at Camp Nou on Saturday

Real Madrid will be desperate to return to winning ways when they lock horns with Barcelona in the much-awaited El Clasico at Camp Nou on Saturday evening. And, Zinedine Zidane has been handed a major boost ahead of his side’s latest fixture.

Sergio Ramos has recovered from the knock he sustained against Cadiz last weekend and is back at the disposal of the Real Madrid manager. The minor injury had forced Ramos to miss out versus Shakhtar Donetsk in the UEFA Champions League earlier this week.

But during his pre-match press conference, Zidane confirmed the availability of the Real Madrid captain. He said, “We know he’s our captain, our leader, and we’re not going to risk him. He’s recovered and he’s going to be with us. It’s about being one hundred percent and Sergio is.”

Ramos’s return means Eder Militao drops out of the starting lineup, with Raphael Varane set to accompany his captain at the heart of the Real Madrid defence. Out wide, Nacho ought to return at right-back to shore up the defensive side of things, with Ferland Mendy moving to the left at the expense of Marcelo. In goal, there is no looking past Thibaut Courtois.

Up ahead in midfield, Zidane has the choicest of options to choose from in his travelling squad. Toni Kroos missed out in the midweek game but should return to the starting lineup against Barcelona, replacing Federico Valverde. Casemiro and Luka Modric, though, will keep their places in Real Madrid’s three-man midfield unit. 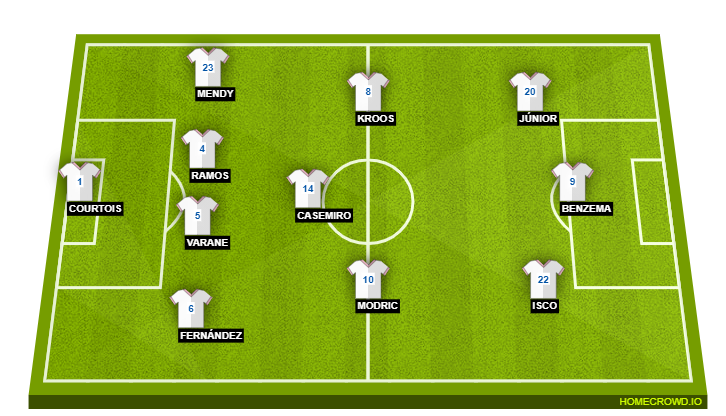 Finally, in attack, Real Madrid talisman Karim Benzema is the obvious choice to replace Luka Jovic while Vinicius Jr. will come in for Rodrygo Goes. Both Rodrygo and Jovic were rather unimpressive against Shakhtar Donetsk.

Meanwhile, Vinicius Jr. has been the form player in attack for Real Madrid, with Benzema’s place in a big game such as the one against Barcelona is undoubted. The third and final spot in attack will likely be taken by Isco, who will overload midfield while occupying advanced positions during the turnovers. Marco Asensio will, therefore, be an option from the bench.