Barcelona will be looking to set up an El Clasico Supercopa de Espana finale when they lock horns with Atletico Madrid in the semi-final at the King Abdullah Sports City in Jeddah on Thursday. And Ernesto Valverde does not have any fresh injury concerns to deal with ahead of his side’s latest fixture.

The Barcelona manager has omitted just three first-team players from the travelling squad and only due to injuries. Those who have missed the trip to Saudi Arabia are Marc-Andre ter Stegen, Arthur and Ousmane Dembele.

Valverde, though, has also taken a number of Barcelona B players to Jeddah, namely Inaki Pena, Ronald Araujo, Jandro, Riqui Puig and Alex Collado, as well as under-19 player Arnau Tenas, who will be a backup goalkeeper during the Super Cup. Valverde spoke about his squad during his pre-match press conference (h/t Barca Blaugranes).

“We bought a lot of players because we may need them. We’ll see what happens tomorrow. We have to train in any case. Obviously we are playing against Atletico and there’s no easy games against them and teams of their quality. We need to be alert, because anything could happen in the game.”

None of the youngsters are likely to get a start against Atletico Madrid and unlike Zinedine Zidane on Wednesday, Valverde might only make minor changes to his side. Starting in goal, both Pena and Tenas will provide backup to Neto, who makes another Barcelona debut in the absence of ter Stegen. Defence, though, could see a couple of shuffles.

Nelson Semedo and Samuel Umtiti are likely to come into the starting lineup, replacing Sergi Roberto and Clement Lenglet, respectively. Umtiti will have Gerard Pique as his partner at the heart of the Barcelona defence, while Jordi Alba is a certain starter as the left-back. 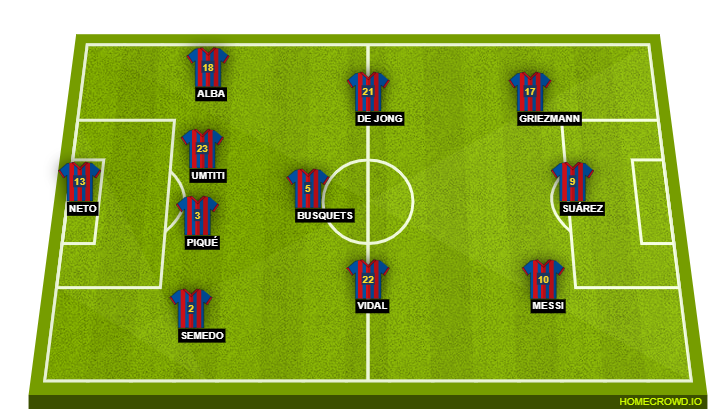 Ivan Rakitic was quite underwhelming against Espanyol last weekend. Rakitic is, therefore, likely to make way for Arturo Vidal, who has been quite impressive in the chances he has been afforded this season. Vidal should have Frenkie de Jong and Sergio Busquets for company in the middle of the park, with Puig and Jandro being options on the bench.

Upfront, Valverde does have the option of using the fit-again Ansu Fati. However, with pressure mounting on him, he is likely to trust his regular attacking stars so as to deliver the first trophy of the season. As a result, Barcelona captain Lionel Messi, Luis Suarez and former Atletico Madrid talisman Antoine Griezmann pick themselves in the three-pronged attack.