Nicolas Pepe is fit to start while Alexandre Lacazette is set to be benched when Arsenal welcome Manchester City to the Emirates on Sunday.

Arsenal will be hoping to build on their win over West Ham United when they play hosts to Premier League champions Manchester City at the Emirates on Sunday evening. And, Freddie Ljungberg has no fresh injury concerns to deal with ahead of his side’s latest fixture.

The Arsenal caretaker boss did not provide any update on the latest team news, but in an interview with the club’s website, he did express his delight at his players’ attitude to overturn their fortunes in the last couple of games.

“I’m happy you saw [the players telling each other what to do in Liege]! I actually had a little review today and I showed just that. We’re actually coaching each other now and you do communicate. For me then, at least, the principles of how you want to play is becoming more clear and it’s a lot easier then to play football.”

Kieran Tierney is a long-term absentee due to a dislocated shoulder. (Photo by Julian Finney/Getty Images)

As far as injuries go, there are no concerns whatsoever in the goalkeeping department, meaning Bernd Leno should resume his duties between the sticks after being rested in the Europa League on Thursday. Defence, though, poses some problems.

Kieran Tierney has been ruled out for up to three months after sustaining a dislocated shoulder in the 3-1 win over West Ham. The injury will require corrective surgery and in his absence Sead Kolasinac remains the only recognised left-back at Ljungberg’s disposal, meaning the Bosnian will surely start against Manchester City.

On the opposite flank, Hector Bellerin has failed to pass a fitness test and will miss out on Sunday. In his stead, Calum Chambers should start as the right-back. Chambers’s deployment on the right side of the Arsenal defence means Sokratis and David Luiz will likely form the central defensive pairing.

As far as midfielders are concerned, Dani Ceballos (hamstring) and Granit Xhaka (concussion) continue to remain on the sidelines. As a result, there is no looking past Lucas Torreira and Matteo Guendouzi to partner up in the midfield double pivot, especially with Joe Willock failing to impress in the 2-2 draw with Standard Liege. 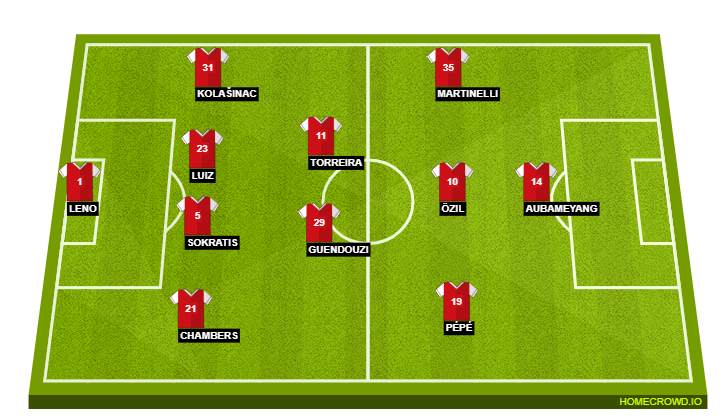 The good news, meanwhile, is that Nicolas Pepe has passed the fitness test and is available to face Manchester City. Ivory Coast international Pepe should line up on the right side of the Arsenal attack, with Mesut Ozil reprising the No. 10 role again.

Arsenal captain Pierre-Emerick Aubameyang picks himself in such games, meaning the final spot in the side will be contested between Garbriel Martinelli and Alexandre Lacazette. Lacazette was underwhelming in the Europa League contest on Thursday and should drop out to the bench, with Martinelli manning the left flank.