Moussa Wague is set to make his first start of the season, while Arturo Vidal will come in for Arthur when Barcelona face Leganes on Saturday.

Barcelona will be eager to retain their place atop the La Liga table when they pay a visit to Estadio Municipal de Butarque to take on Leganes on Saturday afternoon. And Ernesto Valverde has a spate of injury concerns to deal with ahead of his side’s latest fixture.

Defence is where the problems lie primarily, with Clement Lenglet the latest player to be sidelined, due to a calf injury. The Frenchman joins Jordi Alba (hamstring) and Nelson Semedo (calf) on the treatment table and with Sergi Roberto suspended, the full-back slots present a major concern.

On the right flank, with both Semedo and Roberto unavailable, Moussa Wague is set to get a golden opportunity to impress. And, during his pre-match press conference (h/t Barca Blaugranes), Valverde spoke about the possibility of the young defender starting at Leganes.

“We have two possibilities, either we play with Wague, or we change the system. He is prepared, of course, because he played some games last season. If he’s with us then it’s because he can play.”

Wague will be making his first appearance of the season, with Junior Firpo in line to start as the left-back in Alba’s absence. Lenglet’s injury means Samuel Umtiti ought to keep his place at the heart of the Barcelona defence alongside Gerard Pique, while Marc-Andre ter Stegen picks himself in goal.

Up ahead in midfield, Valverde has left Arthur out of the travelling squad to face Leganes, in what is starting to become a trend of late. Ivan Rakitic is in contention to replace the Brazilian, but having only just recovered from an Achilles injury, he is unlikely to start. 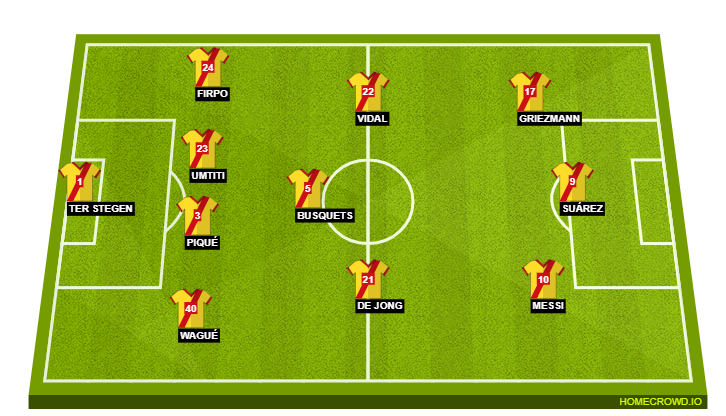 Instead, Arturo Vidal ought to come into the side in place of Arthur. Joining Vidal in the middle of the park, should be Frenkie de Jong and Sergio Busquets. Meanwhile, Valverde has all of his attacking resources at his disposal and the Barcelona manager took the opportunity to speak about Ousmane Dembele during his presser.

“It’s essential that he has continuity. The injuries have prevented that from happening. Various muscle injuries have not allowed him to perform as we would have expected. We are on top of him.”

Dembele, though, is likely to miss out on a spot in the starting lineup, with Antoine Griezmann starting once again. Ansu Fati should make way for Luis Suarez, with Griezmann moving out to the left side of the Barcelona attack, while captain Lionel Messi will start on the right.