Lionel Messi remains unavailable while Gerard Pique is set to make his 500th Barcelona appearance when they take on Real Betis at Camp Nou.

Barcelona will be aiming to get their first points on the board for the 2019-20 La Liga season when they welcome Real Betis to Camp Nou on Sunday night. But, Ernesto Valverde is grappling with a major injury crisis, with just two recognised forwards at his disposal.

The Barcelona boss is also without summer signing Neto for the visit of Real Betis. But, the Brazilian goalkeeper’s absence is not much of a concern, with first-choice custodian Marc-Andre ter Stegen fit and available. The German picks himself in goal and so does the defensive line in front of him, despite a few hairy moments last weekend against Athletic Bilbao.

Nelson Semedo will continue as Barcelona’s right-back, but only just, with his deputy Moussa Wague not picked in the squad to face Real Betis. At the heart of the defence, Gerard Pique should continue to have Clement Lenglet as his partner, while Jordi Alba keeps Junior Firpo at bay in the left-back slot, for now.

The game will be a momentous occasion for Pique, who will make his 500th Barcelona appearance. And, Valverde praised Pique for his achievement during his pre-match press conference (h/t Barca Blaugranes).

“He’s a very important player for us in the dressing room. It’s a very important number for him and the club. I think that’s secondary because I’m focused on his performance on the pitch but 500 matches says a lot about his consistency.”

In midfield, Valverde has the choicest of options at his disposal, although he has left Carles Alena out of Sunday’s matchday squad. While Alena will certainly not be in the lineup, Sergi Roberto is likely to drop down out as well.

In the Spanish duo’s stead, the Barcelona manager is likely to favour to his trusted lieutenants, Sergio Busquets and Ivan Rakitic, to have more control in midfield. The only midfielder to be retained from last week should be Frenkie de Jong, with Arturo Vidal a backup option. 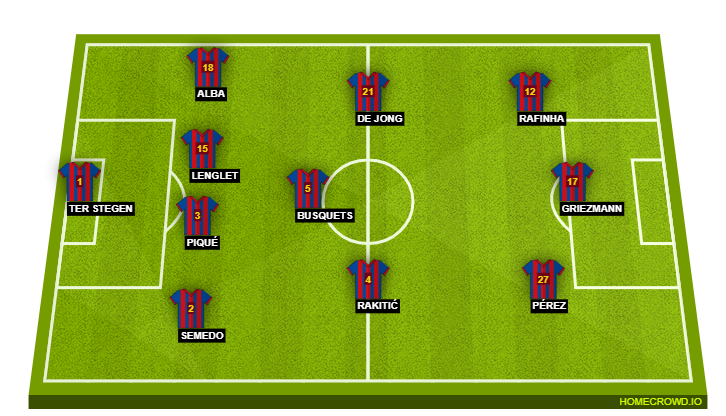 The real problems lie in attack, which is why it is somewhat inexplicable as to why Alena is not in the squad to face Real Betis. As for the injury crisis, Luis Suarez (calf) and Ousmane Dembele (hamstring) are the fresh absentees, while Lionel Messi is still not fully fit.

With Philippe Coutinho no longer at the club, Valverde is stretched for options, especially with Messi still not fit enough to be available. The Barcelona boss was quizzed about Messi’s involvement in the game.

“We have to wait for training. I can’t tell you right now [if he’ll play]. I don’t know for sure. I don’t know if he will be able to play and how much. We don’t want to risk a player who isn’t 100 percent.”

The two aforementioned forwards are Antoine Griezmann and Rafinha, who are certain starters against Real Betis. The final spot in the side will likely be taken by Carles Perez, who will make his first start for Barcelona, with 16-year-old Ansu Fati in line to make his debut later in the game.