Antonio Conte does not have any fresh injury concerns as Chelsea prepare to face Manchester United in a crucial league fixture at Old Trafford on Sunday.

Chelsea will look to continue their recent upturn in form when they visit Old Trafford on Sunday to take on Manchester United in a tie that can potentially have some major repercussions in the top four race. And Antonio Conte will be relieved to not have any fresh problems on the injury front.

David Luiz (ankle), Tiemoue Bakayoko (calf) and Ross Barkley (match fitness) remain the only players on the sidelines, meaning Alvaro Morata is fit and available to feature from the off. Despite the three major absentees, the Chelsea boss wouldn’t be sweating over team selection issues, with ample cover in every position.

At the back, the likes of Andreas Christensen, Antonio Rudiger, Gary Cahill and the ever-present Cesar Azpilicueta are at Conte’s disposal. Among these, Rudiger is likely to be the man missing out, with Chelsea captain Cahill returning to the lineup. 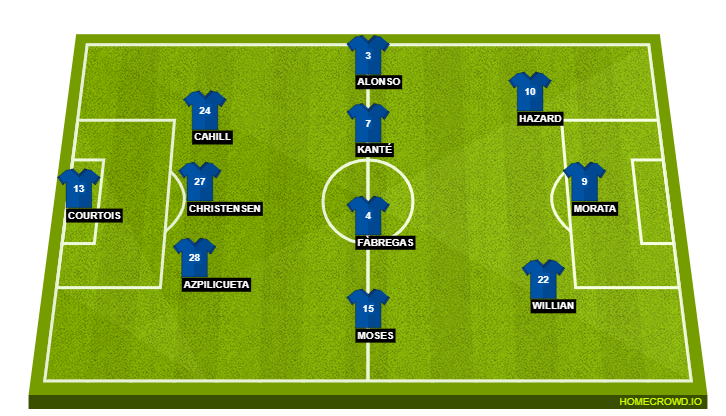 Meanwhile, Conte was full of praise for Christensen, who has been one of the stars of the season for the Blues, but made a grave error that led to Lionel Messi’s goal in the 1-1 draw against Barcelona earlier this week.

“Christensen is having a fantastic season and he is showing great maturity. His performance was wonderful. I trust Christensen. I think this player is the present and also for the future for Chelsea. He can also become the captain of this team.”

Up ahead in midfield, Danny Drinkwater and Cesc Fabregas are the options for Conte, with the latter likely to get the nod to pair up alongside N’Golo Kante to provide a more creative impetus. Flanking the duo in the middle of the park should be Marcos Alonso and Victor Moses, with the duo key on both ends of the pitch.

In attack, Conte might facilitate a slight change in system from the Blues’ midweek draw against Barcelona, with Pedro not impressing much. Alvaro Morata should, thus, start, with Eden Hazard and Willian on either wing.

The Spaniard will be hoping to recreate his heroics from the reverse fixture, and will be a big target man for the wing-backs, with his compatriot an option from the bench alongside January signing Olivier Giroud, if need be.