Antonio Conte is set to ring in the changes as Chelsea prepare to host Norwich City in the FA Cup third round replay at Stamford Bridge on Wednesday.

Chelsea’s intense, unrelenting fixture pileup continues on Wednesday as they welcome Norwich to Stamford Bridge in the replay of their third round FA Cup tie. The original match at Carrow Road had ended in a goalless draw, but despite the magnitude of the game, Antonio Conte will make a number of changes to his side.

The Chelsea boss has iterated that with the Blues facing Brighton in the lunch-time kick-off on Saturday, several second-choice players will get a chance against the Canaries. Three players will be unavailable for the tie though, with Gary Cahill and Cesc Fabregas injured along with new signing Ross Barkley.

Ross Barkley will be ineligible to feature as his transfer was finalised after the Friday deadline in the week of the original match ten days ago. Conte, meanwhile, has confirmed two of his starters in his pre-match press conference, with Ethan Ampadu getting another game to impress, while David Luiz is set to start too. 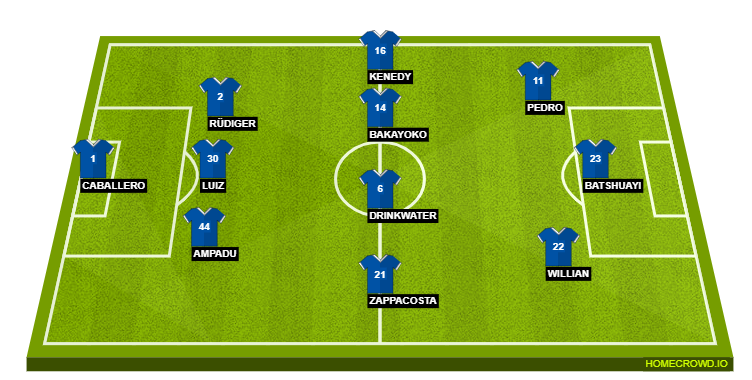 “He will start as one of the three central defenders. He deserves to play. He’s showing that in every game I make this decision, like against Everton and Bournemouth. He’s shown me he is ready to play with the right concentration and be ready physically and tactically to play at this level.”

Ampadu and Luiz are the two confirmed starters in the back-three, and the duo are likely to have Antonio Rudiger for company in defence. Behind them, Willy Caballero should be the man between the sticks, deputising for Chelsea number one Thibaut Courtois, with Davide Zappacosta and Kennedy the wing-backs.

With Barkley ineligible to feature, and Fabregas injured, Tiemoue Bakayoko is likely to partner Danny Drinkwater in midfield to give N’Golo Kante some much needed rest. Another player whose presence has been confirmed for the match is Michy Batshuayi.

Conte has only said that the out-of-favour Belgian striker will feature, but he is likely to get one final chance to prove himself by starting on Wednesday, with his Chelsea future up in the air. Pedro and Willian are expected to be the wingers, with the Chelsea boss hinting towards Eden Hazard being rested.