With all eyes on the Europa League final against Sevilla on Wednesday, Liverpool travel to the Hawthorns on the final day of the 2015/16 Premier League season hoping to sign-off Jurgen Klopp’s first season at the club on a positive note.

The Reds harbour dreams of European glory as they prepare for the big Europa League final date against Sevilla at Basel on Wednesday. Before Liverpool embark on that journey though, there is the small matter of completing their league season with a visit to the Hawthorns to face Tony Pulis’ West Brom.

Klopp will be expected to rest a number of players as he attempts to keep his squad 100% fit before they take the field at Basel. The Reds, however face the prospect of a 39th League game of the season, if results pan-out in a certain fashion, against West Ham in what will be a play-off game to decide the side that takes home the Europa League spot for next season. This is of course considering the Reds lose out in the final against Sevilla.

With Premier League status secured, the Baggies welcome Liverpool on Sunday as they look to cap off an ordinary season with a victory over Jurgen Klopp’s Liverpool. West Brom have been win-less since beating Manchester United over two months ago, losing five games and sharing the spoils in three others to mark a torrid spell for Pulis’ side.

West Brom midfielder Darren Fletcher has been playing with a knee injury for the last six weeks but is expected to feature. James Morrison (hamstring), Chris Brunt (knee) and James McClean (back) are out, with Stephane Sessegnon a doubt.

The absence of James McClean means Tony Pulis could abandon his 4-3-3 formation from last week’s draw at Bournemouth and approach this game with the traditional 4-4-2 lineup that will be see Guimaraes Cordeiro and Jonathan Leko take the place of McClean and Sessegnon in the side. Darren Fletcher and Yacob could take their places in the center of the park sitting behind their attacking duo in Salomon Rondon and Saido Berahino. Ben Foster and the back four of Jonny Evans, Jonas Olsson, Gareth McCauley and Craig Dawson are expected to keep their places. 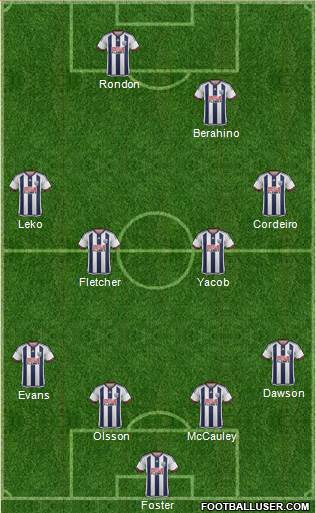 Klopp made eight changes for Watford’s visit to Anfield last week and with the German seeking to keep his Europa League final XI fresh and fit, he’s likely to have a lot of youth and academy players take the field at the Hawthorns on Sunday.

Sergi Canos who just returned from his loan-spell at Brentford has been slated to start his first game under Klopp. Danny Ings, who has been training with the squad for over a week now, is expected to get a look-in later on in the game.

The Reds will probably go ahead with their standard 4-2-3-1 formation with Christian Benteke sitting up front in the striker’s role flanked by Sheyi Ojo and Sergi Canos on either side. Cameron Brannagan could assume a central role behind the Belgian. Kevin Stewart and Lucas Leiva could take their positions in the center of the park while the likes of Skrtel and Tiago Ilori would be tasked with keeping check on the threat posed by Rondon and Berahino. Brad Smith and Jon Flanagan could take their full-back roles with Danny Ward guarding the Liverpool goal. 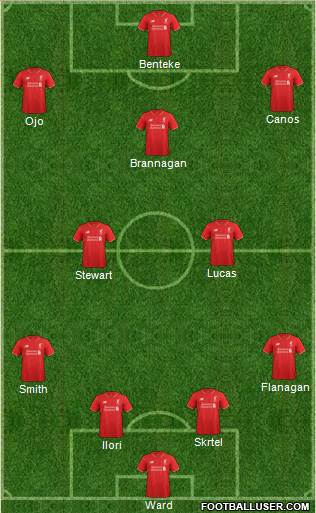 In the game against Chelsea, the Ojo-Benteke pairing immediately clicked as the duo came off the bench and combined to give Liverpool a late equalizer. Playing around a relatively young Reds squad, the success of the pairing could decide the result tomorrow at the Hawthorns. The Baggies’ target-man Rondon should be on cue to grab his chances as well should he plot to trouble Klopp’s side. This could be a game where aerial prowess plays a big role and hence Benteke and Rondon are the key players for the two sides.