You are here: Home » news » No place for Ozil as Tottenham and Leicester City dominate PFA Team of the Year
Football News 24/7

The Professional Footballers Association have announced their Premier League Team of the Year, and it features four players each from the top two teams in the league table right now. Perhaps surprisingly, the man with the most assists in the league was not selected by his peers.

Arsenal fans will be shaking their heads in disbelief as their assist king Mesut Ozil was left out of the PFA Team of the Year. The German midfielder has notched up 18 assists this season, two shy of the all-time league record, but lost out on a place in the team to the likes of Dimitri Payet and Riyad Mahrez. Tottenham and Leicester City have been phenomenal this season and justifiably have four players each in the team of the year [via BBC].

The two clubs’ top strikers Jamie Vardy and Harry Kane are leading the goalscoring charts at present, having scored 22 and 24 league goals respectively this season. The duo unsurprisingly made the team, while the midfield was made up of Payet, Mahrez, Leicester City’s midfield dynamo N’golo Kante and Tottenham’s young star Dele Alli.

PFA Team of the Year 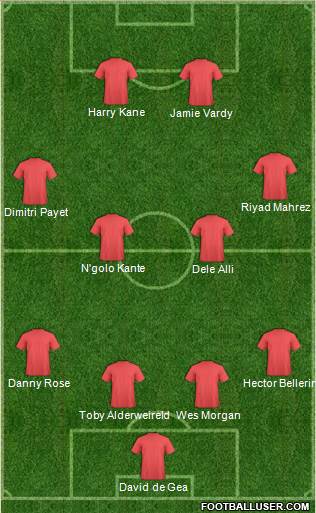 The year of the underdog

Tottenham Hotspur and Leicester City are giving the established Premier League clubs a lot of food for thought. While Spurs have relied on a homegrown core full of youth and energy, the Foxes have just the right mix of youth, talent and sheer determination. The selection of four players from each of those two clubs proves that their rise has been more due to exceptional team effort rather than solely individual brilliance.

Even West Ham United have had a superb season and are currently competing for fifth spot against Manchester United. They are rightly represented by their key creator Dimitri Payet, who has been involved in 18 goals (9 goals, 9 assists) for the Hammers this campaign.

Of the established elite, only Arsenal and Manchester United find themselves represented in the PFA Team of the Year. While the Gunners would be wondering how Ozil doesn’t make the cut, the Red Devils’ supporters will know that David de Gea has been their outstanding player of the season. The Spaniard, who has 14 clean sheets, is probably the only reason United can still harbour ambitions of finishing in the top four.