While it’s a third consecutive semi-final appearance for Atletico De Kolkata, Mumbai City FC are in the knock-out stage of the competition for the first-time and they will look to carry forward their flawless run of performances this term to take them all the way through.

It’s been an enthralling two months of action packed football in the third installment of the Indian Super League and fifty-six games later we have finally arrived at the knockout stage of the competition with Atletico De Kolkata and Mumbai City FC squaring off in the first-leg of semi-final 1 on Saturday. Both the sides have done well to remain in the top half of the table throughout the campaign and will hope to carry that through in their bid to secure the coveted ISL crown.

Jose Molina has carried forward his predecessor’s impressive streak of knockout appearances to keep the West Bengal outfit in with the chance of emulating their exploits from two seasons ago. Meanwhile, Alexandre Guimaraes has, with a knockout qualification alone, outdone all the previous Mumbai bosses. With his side playing some flawless football on occasions, they will hope to secure their maiden crown come 18th December.

As mentioned earlier, Kolkata are no strangers to the knockout stage of the competition being one of the only sides to have featured in the play-offs of all the editions of the ISL thus far. Hence, they will look to factor in their experience to break down a Mumbai side that have looked flawlessly good this season. However, things are a lot different in this Kolkata side from the title winning one two years ago. While Antonio Lopes Habas’ side will be remembered for their dogged defending, that hasn’t exactly been the case with them this time around having shipped a few goals over the course of the competition.

Their forward line is also cause for concern for Molina with the 2016 edition showcasing a considerable downgrade on output in terms of goals as compared to last season. However, given how they came effective when it mattered towards the business end of the competition, the 2014 champions have reason to be optimistic of breaking Mumbai City’s defensive resilience with their forward line of Iain Hume and Helder Postiga.  They may have shipped a lot of goals but that by no means makes Kolkata an easy team to beat. Molina’s side have lost only two games all season, a record matched by no other team in the league.

Atletico have mostly adopted a 4-2-3-1 and 4-4-1-1 formation throughout the season and are most likely to adopt the latter on Saturday knowing that they will need bodies behind to defend against the Mumbaikars’ pacy and creative forward line. Kolkata’s strength lies in the midfield partnership of Stephen Pearson and Borja Fernandez in the centre of the park and Molina will hope the duo can come good on the night of the semi-final. With the first tie at home, Kolkata will look to draw first blood ahead of the 2nd leg at the Mumbai Football Arena.

Despite Mumbai’s good run of form, the pressure will be on Molina’s side to take the honours in the first leg while the Maharashtrian side will be more than happy to come away with a scoring draw keeping in mind the away goal advantage. Last time around, Kolkata were dispatched 3-0 in the first leg in their own backyard by eventual champions Chennaiyin FC and will look to avoid a similar result this time around as three away goals will practically spell the end of the road given how goals have been scarce to come for them. 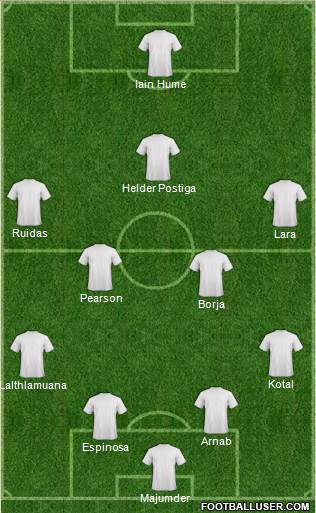 Having done all the hard work so far in the competition, Mumbai City will need to maintain that for three more games to secure what will be a famous ISL triumph. Tactically astute Alexandre Guimaraes has completely transformed this Mumbai side from wooden spoon dwellers to potential champions. His tactics alongside some effective performances from players in their respective positions has handed his side the upper hand over a majority of their opponents.

Everybody from the marquee signing to the Indian and overseas recruits have done their part admirably well for Guimaraes and have been a key factor behind the flawless attacking football practised by the Ranbir Kapoor-owned franchise. Mumbai’s net has bulged only eight times this season, comfortably the least among all the sides. No team besides Delhi Dynamos has put more than one goal past them in a single match, and Mumbai’s six wins in the league stage are the joint-highest.

Mumbai are well-stocked in attack too, with Diego Forlan, Matias Defederico and Krisztian Vadocz all clicking together at the right time. Form goes out of the window when it comes to a playoff game, but at least on paper Mumbai would appear to have the psychological edge over their rivals, especially since they play the all-important second leg at home and have already beaten Kolkata once this season.

While there are a considerable number of options to ponder upon for the coach in attack, the defence practically picks itself with Anwar Ali, Lucian Goian, Ralte and Gerson Vieira lining up at the back. In attack, Diego Forlan will keep his spot up top with Sunil Chhetri, Defederico and Brito Alves lining up behind the Uruguayan forward. Vadocz and Udanta Singh are expected to keep their places in centre-midfield. 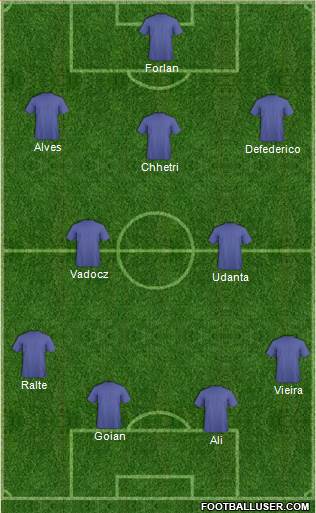 He has been a key cog in defence for the table toppers and a major factor behind the Mumbaikars shipping a paltry total of just eight goals over the course of the 14 games. He will come in crucial as far as stopping the likes of Iain Hume in his tracks as they bid to draw first blood from the first leg in Kolkata. The captain has also been an able leader on the pitch, marshaling his forces from the back, and his presence will be a massive addition for Mumbai in their pursuit of unprecedented ISL glory.

He hasn’t enjoyed the brightest of campaigns, but Iain Hume continues to remain a threat for opposition defenders purely keeping in mind what he is capable of. He hasn’t matched his goal tally from the past seasons but his presence and creativity will still come in handy partnering Helder Postiga up front.

Mumbai look the better side going into the tie and should they maintain their level of performances, they have a decent chance of replicating their away win from early on in the competition. Diego Forlan aided by the services of Defederico, Vadocz and Chhetri will be a force to be reckoned with and will prove to be a thorn in Atletico’s defence. How well they hold the Mumbai attack in their tracks and the effectiveness of the midfield partnership will go some way in determining which direction the semi-final is headed.