You are here: Home » india » Indian Super League : Atletico De Kolkata and Kerala Blasters set to battle it out for a semi-final berth
Football News 24/7

It’s been yet another topsy-turvy ISL season, but as we approach the business end of the campaign we are beginning to get  a fair idea as to how the line-up of semi-finalists would look like. With only Mumbai City FC sealing their place in the last four, two other favourites in Kerala Blasters and Atletico de Kolkata will battle it out on Tuesday to seal their respective semi-final berths.

Both the sides come into the fixture at the back of important victories over FC Pune City and FC Goa respectively. They will need to win in-order to avoid being the victims of a potential upsurge in form among the teams placed below them. That said, it sure promises to be a fascinating encounter between the two sides at Kolkata.

Things haven’t always been smooth in this year’s ISL for Jose Molina’s side but the club from West Bengal have done enough to remain well within a chance of emulating their title winning exploits from the first edition. One among the many positives that the boss will incur from their recent victory against FC Goa was the performance of Helder Postiga. The striker was involved more often in build-up play and looked much better on the ball as compared to early on in the campaign when he struggled to create an impact. However, his partner Iain Hume had an absolute stinker and will be cause for worry for Kolkata going into the Blasters game.

Atletico de Kolkata warm up before the game during match 41 of the Indian Super League (ISL) season 3 between Atletico de Kolkata and NorthEast United FC held at the Rabindra Sarobar Stadium in Kolkata, India on the 17th November 2016.
Photo by Luke Walker / ISL / SPORTZPICS

Molina will also be sweating on the fitness of star midfielder Sameehg Doutie, besides Stephen Pearson and Lalrindika Ralte. While Doutie has fever and didn’t train with the team, Lalrindika and Pearson have not yet recovered from injuries. Pearson enjoyed a brilliant outing against FC Goa scoring the last minute winner that handed his side a crucial three points hence he will be a major absence for the Bengal Tigers should he miss out.

Abhinas Ruidas stepped into replace Doutie in the line-up and is expected to keep his spot given that the latter is yet to recover from his injury. Kolkata boast a better head-to-head record over Kerala Blasters and Northeast United hence a win will do the job big time for Molina’s side. The boss will stick to the 4-4-1-1 he has deployed all season with little changes expected apart from the replacements to those injured. 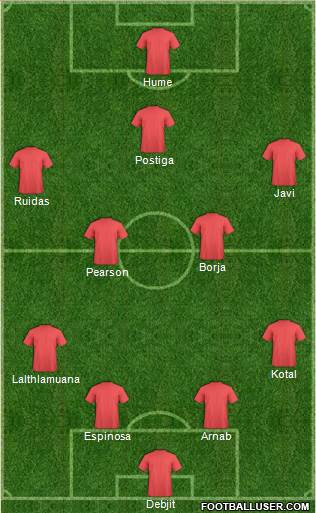 After a disappointing start to the season, Kerala have picked themselves up admirably well and witnessed a massive upsurge in form to put themselves within a shot at knockout qualification thanks to the return of striker CK Vineeth from his Bengaluru FC duties. A win against Kolkata may keep Steve Coppell’s side in the equation for qualification but where the head-to-head record comes to the table, there is little backing for the South Indian giants.

The Blasters may have been a force to be reckoned back home in their fortress at Kochi but they have been miserable on their travels. In their six away games, the Blasters have mustered a solitary win against bottom-of-the-table FC Goa while shipping an uncharacteristic 10 goals in the process including a 5-0 mauling at the hands of Mumbai City FC. Worryingly, they have failed to score in four of their six away games and scored only three away goals, the lowest by any team.

Kerala Blasters FC team warm up before the match 37 of the Indian Super League (ISL) season 3 between Kerala Blasters FC and Chennaiyin FC held at the Jawaharlal Nehru Stadium in Kochi, India on the 12th November 2016.
Photo by Sandeep Shetty / ISL / SPORTZPICS

Coppell’s side have some searing pace, skill and quality in attack that have caused a few problems for teams off-late. And there is no doubt they will look to exploit Atletico’s shortcomings in attack to try and provide an Arnab Mondal-led backline a true test of it’s resilience. There are no major injury worries plaguing the Blasters as they have a near full-strength line-up to exploit against a resurgent Kolkata side.

Watching Kerala Blasters carve open defences in their fortress at Kochi has been a joy to watch for the neutral fan this season and while it hasn’t been a similar tale with their travels, the sense of occasion and opportunity should be something Coppell will bank on to earn an unlikely passage through to the semi-finals. The attacking proficiency will be the deciding factor in this game and Kerala’s forward line have undoubtedly been the most imperious in recent game which is why one would tip the pendulum in their favour to take the cake against Atletico.