The champions of the inaugural season of The Indian Super League in 2014, Atletico De Kolkata looked set for another title challenge in the second season as they bettered their points tally of the inaugural season in the preliminary stages and qualified for the championship playoffs. But, they were outdone in the Semi-finals by the eventual champions, Chennaiyin FC who beat the Kolkata outfit 4-2 on aggregate thanks to a wonderful performance by their star forward Stiven Mendoza.

A new season and a new coach presents another opportunity for Atletico De Kolkata to muster up another successful Super League campaign under the tutelage of former Villareal manager Jose Francisco Molina. The Hard Tackle takes a better look at the current squad of the former Champions and analyse their chances of challenging for the top honours once more as the third season of the illustrious league dawns upon the football-crazed country. 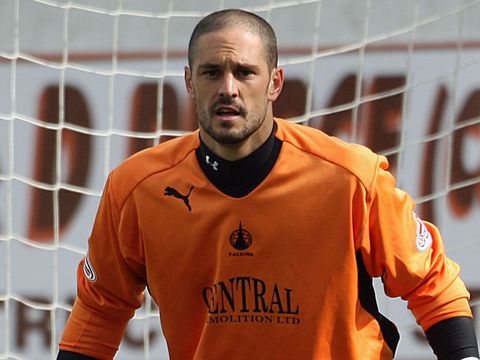 The Spanish veteran would look to bring his experience into play as he braces up for what is to be his first experience of Indian football. (Picture Courtesy – Sky Sports)

Dani Mallo headlines the goalkeeping roster for the red and whites as the Spaniard makes its first foray into the Indian Super League which just so happens to be the 37-year-old’s first instance of footballing duties outside of Europe. Mallo came through the ranks of La Liga club Deportivo La Coruna and went on to feature for the side in the top flight of Spanish football before making the switch to Portugal with Braga. Mallo has also represented Spain at the U18 and U21 level and with the veteran custodian having played top-flight football in Spain, Portugal and Scotland, he will add a wealth of experience to the defence for new manager Molina.

Atletico De Kolkata have acquired the services of goalkeeping duo Debjit Majumdar and Shilton Paul from Mohun Bagan on a temporary basis. While Debjit has had stints with East Bengal and Mohun Bagan, Shilton Paul is a more household name for the football fans in Kolkata with the Tata Football Academy graduate racking in 120 appearances for the Maroon brigade and the Kolkata fans would be happy to see a local connection with the ISL outfit. It looks like Molina would choose Dani Mallo or Debjit Majumdar in goal and the duo are set to share goalkeeping duties for the coming season with Shilton Paul playing the role of a back-up, who could come in handy if either of the keepers face time on the sidelines.

The outfit has welcomed back 25-year-old Tiri back from Atletico Madrid with the Spaniard being a regular face in the starting lineup for Atletico De Kolkata last season. Tiri made 13 appearances for the club and is likely to again be a regular feature of their lineup. Tiri is joined by 30-year-old Sevilla graduate Pablo Gallardo who is set to add further steel to an already strong defensive roster.

The 25-year-old was a mainstay in the ATK lineup last season and would look to contribute again as the club aim for another successful campaign in the illustrious league. (Picture Courtesy – ISL official website)

As far as the Indian contingent goes, East Bengal defender Arnab Mondal is the most renowned from the group and is a familiar face having played a total of 29 games for ATK over the two seasons and the Indian international is likely to retain his place alongside Tiri in the centre of the defence. Mohun Bagan veteran Kingshuk Debnath fills up the central defensive roster for the club.ATK have chosen to go with a mix of experience and youth on either side of the defence. Pritam Kotal and Prabir Das provide a youthful option at the right-back position while the club has the experienced pair of Robert Lalthlamuana and Keegan Pereira available for the left side of the defence.

23-year-old Kotal has already featured 12 times for the senior Indian side and is likely to command his place on the right side of the defence but the 22-year-old Prabir Das would be looking to impress the club and the viewers in the limited playing time in order to establish himself on the Indian scene. On the other side, both Robert and Keegan are debutants for the club with the former having more experience, albeit marginally, than the latter which could be the decisive factor in Molina’s choice for the left-side of his defence.

Molina has a wide range of midfielders available to fill each position in whatever formation he wants to play and he has the depth to cover up for the injuries. The veteran Borja Fernandez has returned for his third season with Atletico De Kolkata and is likely to retain his place in the starting lineup as the marshal of the midfield. Botswana international Nato is also in his third season with ATK and will look to impress again while 23-year-old Bikramjit Singh will act as backup and look to impress the Indian clubs and viewers whenever given the chance.

ATK welcome Stephen Pearson to their midfield roster with the Scot having played top tier football in England and Scotland while also doing a stint with Kerala Blasters in the inaugural season of the ISL. Javi Lara returns to the side after a loan spell with Cordoba in the Spanish second division while Jewel Raja also joins for a second season with the Red and Whites. 24-year-old Dika Ralte provides the club with an attacking outlet and has impressed in the I-League with his performances for East Bengal. East Bengal duo, Abhinas Ruidas and Bikash Jairu join the squad to provide options on either side of the midfield with South African Sameehg Doutie, who has played for top teams like Ajax Cape Town, Orlando Pirates and Supersport United in the South African league. Sameehg Doutie played a key role in ATK’ s resurgence in the second half of the league last season.

Bidyananda Singh has made his mark already at such a young age with Barcelona reportedly considering the player for their academy and is touted as the next big face of Indian football in the future. (Picture Courtesy – XtraTime)

Indian wonder-kid Bidyananda ‘Honda’ Singh has been roped in by the former champions in what has been one of the stories of the transfer season. The youngster impressed the Barcelona coaches and officials from Manchester United and other big clubs with the Blaugranes coaches labeling him Honda for the stark resemblance the youngster bears to the Japanese international. Bidyananda plays the defensive midfield role but Molina could experiment with the player and try to put him in different positions in the midfield in an attempt to map the player’s efficiency and adaptability.

Helder Postiga is Atletico De Kolkata’s marquee player for the second season in a row and the Portuguese brings along with his finishing prowess, a wealth of experience having played with some of the biggest clubs in Europe. The veteran picked up an injury in the very first game last season and had to miss the rest of the season. He would be hoping to play a much bigger role this season and help his side lift the title. 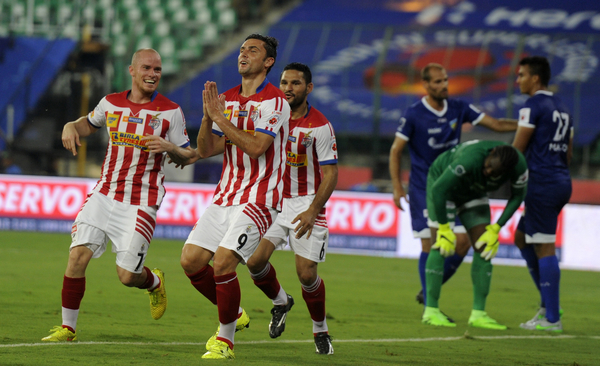 The duo of Postiga and Hume provide a lethal combination for ATK and could just give them the required push to get over the line this time around. (Picture Courtesy – IBTimes)

Belencoso is a largely unknown quantity and has played for a number of clubs. But, his most prolific time came in Hong Kong with the champion club Kitchee where he scored 30 goals in 39 appearances. The 35-year-old will be making his debut in Indian football and would look to make his mark in way similar to what he did at Kitchee.

On to the star of the Atletico De Kolkata squad, Canadian Iain Hume has been on fire since joining the Red and Whites outfit. The former Leicester City forward played for Kerala Blasters in the first season of ISL and helped them reach the finals as they fell short to Atletico De Kolkata. The forward then implemented the ‘If you can’t beat them, join them’ strategy as he moved states to join the ATK side and absolutely dominated the ISL as he finished the second season with 11 goals to his name. The 32-year-old would love to carry his last season form into the upcoming season as Atletico De Kolkata aim to march towards supremacy. 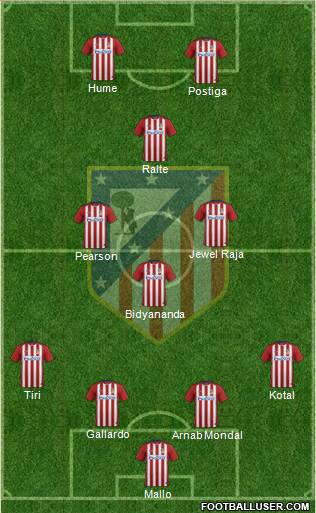 Molina could opt for the diamond as it would give the team a nice shape with room for the full-backs to make their marauding runs and overlap their midfielders providing them with options further up the pitch. Bidyananda could be the breakout star of this season’s ISL and the former Villareal manager could make a bold statement by preferring the youngster over Borja to marshall the Atletico midfield. The attack looks sumptuous as ever with the duo of Postiga and Hume as it looks like it is set to be a season for cheer for ATK fans come October.