Bert van Marwijk has zeroed in on his final 23-man squad for the 2018 FIFA World Cup. But, can Australia enjoy a memorable World Cup campaign?

A nation that has found a stable footing in world football over the last couple of decades. Successive top three finishes in the 1997 and 2001 editions of the Confederations Cup set Australia on the road to becoming a household name in international football, and they haven’t looked back since switching confederations from OFC to AFC in 2005.

Since the switch, Australia have qualified for four successive World Cups, although they had to take the tougher route of the play-offs for their most recent qualification, with some uncertainties hanging over the National Side due to their latest transition phase.

Nevertheless, the Socceroos did manage to successfully qualify for the World Cup, beating Honduras in an intercontinental play-off to book their place in Russia 2018. The Hard Tackle now picks apart the squad that Bert van Marwijk has picked for the tournament, and whether they can improve on their group stage finish from 2014.

Drawn in a tricky Group C, with Denmark, Peru and one of the pre-tournament favourites, France, Australia look set to face a hard time getting past the first stage of the competition.

The Socceroos will begin their World Cup journey in Russia on the June 16 against France, and will have a four-day break before their face Denmark on the 21st. Bert van Marwijk’s men will then wrap up their group stage campaign five days later against Peru on the 26th of June.

The squad has been named. Who are you most looking forward to seeing on the pitch at the @FIFAWorldCup? #GoSocceroos https://t.co/hCr8CRORRL pic.twitter.com/t7e1bTRGjj

Bert van Marwijk had initially picked a 32-man preliminary squad, which has now been trimmed down to 23, two days before the June 4 deadline. Here are the players who have made the cut for the final squad that will travel for the World Cup:

Long-serving captain Mile Jedinak will lead the side in Russia as well, and will be the midfield general for the Socceroos. But, while Jedinak’s selection was a mere formality, van Marwijk did throw up one or two surprises.

Tim Cahill was the biggest of these aforementioned surprises on offer. Sure, he is the all-time top scorer for Australia and has been on target in each of his previous campaign in a World Cup finals, but the fact that he is without a club and could possibly be lacking sharpness in front of goal is a burning question ahead of the tournament.

Back for one final hurrah. (Photo courtesy – Robert Cianflone/Getty Images)

But, van Marwijk himself admitted that Cahill is a “special case” and will be hoping that the veteran striker can inspire a young side to lift their game up and mentor them to a possible Round of 16 place. On a personal level, the 38-year-old would be hoping he can join an elite list of players who have scored in four editions of the World Cup.

Apart from Cahill, the selection of the uncapped Daniel Arzani hasn’t so much as raised eyebrows as much as it has been vindicating. There had been calls for the teenager’s selection for a long time, especially after a breakout season with Melbourne City that is sure to have alerted several clubs in Europe.

Meanwhile, Aaron Mooy is likely to be the pivotal player for Australia, who possess a barrage of quality midfielders. Alongside the Huddersfield Town schemer, captain Jedinak as well as experienced defender Trent Sainsbury will be key figures in midfield and defence, respectively.

The managerial situation that the Australia National Side finds itself in is quite perplexing to say the least. The Socceroos’ World Cup qualification was masterminded by Ange Postecoglou, under whom they also won the AFC Asian Cup for the first time in 2015.

However, after taking the long route to the finals in Russia, Postecoglou resigned from the helm, citing that he was tired after a long, drawn out qualifying campaign. The timing of the decision sent the FFA into a frenzy before they finally zeroed in on Bert van Marwijk.

But, the Dutchman has only been appointed on a short-term basis, with Graham Arnold set to take over at the helm after the World Cup. Nevertheless, van Marwijk’s appointment can be seen as one that could spark life into a tired unit, considering the manager’s history at the World Cup.

The Dutchman famously took Netherlands to the final of the 2010 edition, and anything more than a Round of 16 qualification will likely be seen as a bonus, and a resounding success. Coincidentally, van Marwijk was responsible for guiding Saudi Arabia to Russia 2018, but his sole focus is now on the Australian side.

What is pretty concerning is the fact that van Marwijk will leave the decision on his best eleven until the very last moment, although understandably so, with the manager having little time to work with the squad. But, a 4-0 friendly win over Czech Republic would have surely given some optimism to the fans.

Ideally, van Marwijk is likely to go with 4-2-3-1 as his preferred formation, with midfield the most settled unit in his squad. Mile Jedinak will be the midfield general shoring up the defensive side of things, while Massimo Luongo should line up alongside him, moving the ball forward with pace.

Aaron Mooy is likely to start in the hole, with Tom Rogic the backup, should the Huddersfield man be deployed in a deeper role. Matthew Leckie and Robbie Kruse should assume the wide roles, but the striker slot could go to either of Tomi Juric and Jamie Maclaren, with Tim Cahill likely to be a backup option.

The back-four should ideally comprise of Trent Sainsbury, Milos Degenek, Aziz Behich and Josh Risdon, with the versatile Mark Milligan also an option to line up at the heart of the defence. Meanwhile, Mathew Ryan is the favourite to start between the sticks, and remain as the first-choice throughout the competition. 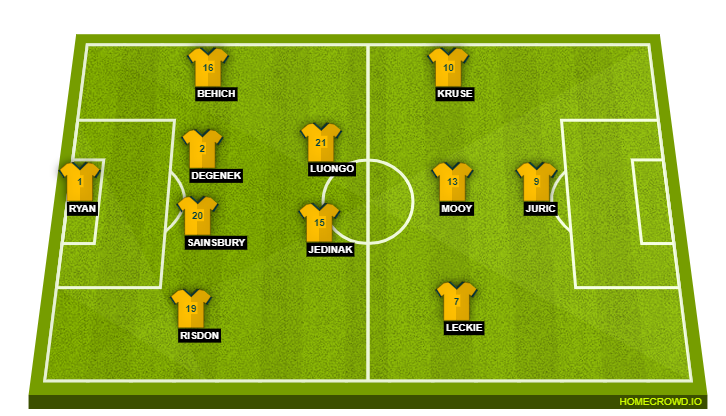 Australia have made it a habit to qualify for the World Cup, having established themselves as an “Asian” powerhouse. Heading into the 2018 edition though, the odds seem to be stacked heavily against them, and a top two finish in a difficult Group C looks unlikely.

That Peru and Denmark are riding a wave of confidence only adds to the uncertainty looming in the Socceroos’ camp. Therefore, it will be a genuine surprise if Australia do make it out of their group, even though they have an experienced manager at the helm in Bert van Marwijk.