Age Hareide has trimmed his preliminary squad down to 27. As Denmark make a return to the World Cup, we analyse if they can make it a successful comeback.

Once a dominant force in European football, the going has been tough for Denmark in the 21st century. The furthest they have gone in a campaign is the Round of 16 in the 2002 edition, when England ended their run, while their participation in South Africa 2010 only lasted till the group stage.

The Danes have continued their pattern of qualifying in alternate editions, taking the playoffs route where they thrashed the Republic of Ireland en route to securing qualification for the FIFA World Cup 2018 in Russia.

With Denmark playing some of the best football that they ever have, hopes of going one better than 2010 and perhaps, even 2002 aren’t too far fetched. The Hard Tackle now takes a look at the squad that Age Hareide has picked and assesses, whether they can enjoy their best ever World Cup campaign.

Drawn in Group C alongside Australia, fellow comeback men Peru and one of the favourites, France, Denmark have a tricky time to look forward to in the opening stage of the World Cup.

Age Hareide & co. will begin their campaign against Peru on June 16 before they go on to face Australia on the 21st. The first two games will go a long way in determining their fate, with Denmark facing Les Bleus in the final game of their group stage assignment.

Age Hareide initially picked a 35-man preliminary squad which has been trimmed down to 27. The current squad faces another trimming ahead of the June 4 deadline before it is submitted for the World Cup. Here are the players who have made the cut in the current 27-man group.

Veteran defender Simon Kjaer will don the armband for Denmark at the World Cup, looking to lead a strong, disciplined backline. Meanwhile, there weren’t many shocks and surprises in the preliminary squad that Hareide has selected for now.

Pierre-Emile Hojbjerg is the only big name player who has missed the cut, perhaps understandably so, after an underwhelming 2017-18 campaign with Southampton in the Premier League. But, veteran striker Nicklas Bendtner could end up joining the former Bayern Munich midfielder to hand Denmark a bitter blow ahead of the World Cup.

The former Arsenal striker seemed to have picked up a groin injury in a Norwegian league game while playing for Rosenborg on Monday. The final call on Bendtner will be taken after results of medical tests that were conducted on Tuesday are known.

Meanwhile, Christian Eriksen will be the side’s talisman, looking to continue his form in front of goal. The Tottenham superstar was the most prolific midfielder in the qualifiers, scoring 11 goals in all, and will be ably assisted in midfield by Thomas Delaney.

All smiles after a return to the big stage. (Photo courtesy – Andrew Halseid-Budd/Getty Images)

Age Hareide was appointed as the manager in December, 2015 after Denmark had failed to qualify for Euro 2016 under their long-serving manager Morten Olsen. Under Olsen, the Danes had played in a possession-based system that seemed to have run its course, and Hareide has rightly implemented changes.

The veteran manager has adopted a more direct style of play, which has certainly had positive results thus far. Denmark have lost just thrice in 21 games under the tutelage of Hareide, and with two four-goal thrashings to boast of during their World Cup qualification campaign, his methods look to bearing fruits.

Another result of the shift in playing outlook has been the pragmatism that has come along with it. Unsurprisingly, the defensive unit has been more formidable than ever before, with Simon Kjaer and Andreas Bjelland forming a solid central defensive partnership. Andreas Christensen and Jannik Vestergaard should be backups to the duo.

Kasper Schmeichel is an experienced head between the sticks and will be one of the best goalkeepers playing in the World Cup. Completing the backline for De Rod Hvide should be Jonas Knudsen and Jens Stryger Larsen, who has returned to playing on the right side of defence due to Knudsen’s emergence.

The rest of the lineup is pretty settled, with experienced midfielder William Kvist holding the fort in the middle alongside Thomas Delaney, who likes advancing forward to join up with attack. Eriksen will be at the heart of the attacking unit, with Yussuf Poulsen and Pione Sisto providing pacy outlets out wide.

The striker’s slot should be taken up by Nicolai Jorgensen, with Bendtner and Andreas Cornelius his backups. Ajax wonderkid Kasper Dolberg is an option as well, and could be the wildcard for the Danish side. 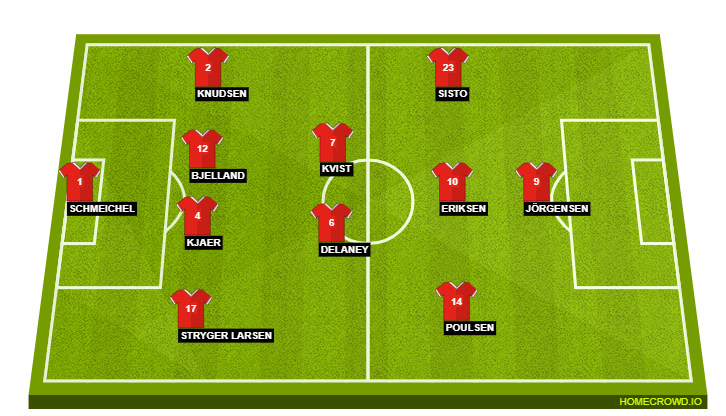 Age Hareide has overseen a fantastic turnaround in Denmark’s fortunes after they missed qualification for Euro 2016. The rise in the rankings is also a testament to the same, with De Rod Hvide one of the highest ranked sides in the World Cup, from being 46 just 18 months ago.

Hareide has a squad that has settled well under him, while absorbing his ways perfectly. With two unsettled sides in Peru and Australia battling them for the runners-up spot, Denmark should be able to tackle their group rather smoothly before most likely seeing their run come to an end in the Round of 16 unless they pull a surprise on possible opponents, Argentina.