You are here: Home » blogs » 3 formations Jurgen Klopp could use at Liverpool this season
Football News 24/7

Liverpool have brought in a number of new players as Jurgen Klopp made the most of his first summer transfer window as Reds manager. Although many of the signings have been low key compared to their competitors, Liverpool now have a very strong squad to choose from this season.

Senegalese winger Sadio Mane from Southampton and Dutch midfielder Georginio Wijnaldum from Newcastle United have been the two biggest arrivals at Anfield this summer. However, there have been a number of other important signings made to strengthen weak areas – centre-back Joel Matip and goalkeeper Loris Karius will look to bolster the Reds defence.

The Anfield faithful have huge expectations from Jurgen Klopp, who recently extended his contract with Liverpool till 2022. The German led the club to memorable wins against Manchester City in the Premier League and Manchester United in the Europa League last season, but the Reds still finished in eighth spot and will not be playing European football this season.

Klopp has now moulded the squad to his preferences and will hope to improve on that finish this time around. The squad strength will help him implement the high intensity style of play the former Dortmund manager wants to bring to Anfield.

Here are three ways Liverpool could line up this coming season.

Klopp did employ the 4-2-3-1 formation last season, but his transfers indicate that he will shift to a more attacking formation for the new campaign. His high pressing tactics means that the German manager will want to put in as many bodies in advanced midfield positions as possible.

Joel Matip and Dejan Lovren will feature at the heart of defense, flanked by Nathaniel Clyne and Alberto Moreno, and with Lorris Karius in goal. German defensive midfielder Emre Can would be the only one tasked with shielding the defence, while Georginio Wijnaldum and Jordan Henderson are likely to play behind the wingers Sadio Mane and Philippe Coutinho. The number one striker for Jurgen Klopp will ideally be Daniel Sturridge. However, the injury problems that have plagued the Englishman could mean a break for young Belgian forward Divock Origi. 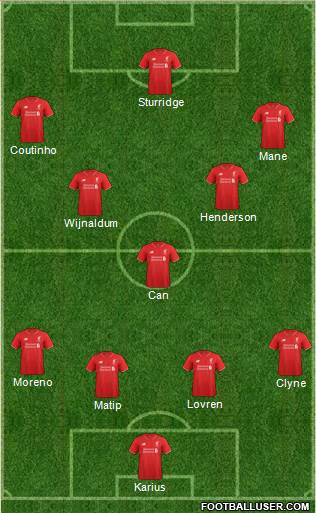 2. Making use of Milner and Mignolet

Two positions for which there will be some competition this season are in goal and left-back. Spaniard Alberto Moreno hasn’t performed up to expectations in the left flank of defence, and Jurgen Klopp has identified veteran midfielder James Milner as a player who can play in that role. The 30-year-old emerged as the assist king for the Reds in the latter half of last season, and with his experience and work rate could oust Moreno from the starting XI.

Former Mainz keeper Lorris Karius was expected to be the no. 1 goalkeeper at Liverpool. However, the oft criticized Simon Mignolet has the chance to make a case for his selection after the German goalie suffered a broken hand in pre-season, which will rule him out for at least two months. The change in goal could even prompt Klopp to use a 4-3-3 formation, with Henderson and Wijnaldum set to be more defensive minded. A counter attacking style instead of high pressing could be adopted by the German manager in this situation. 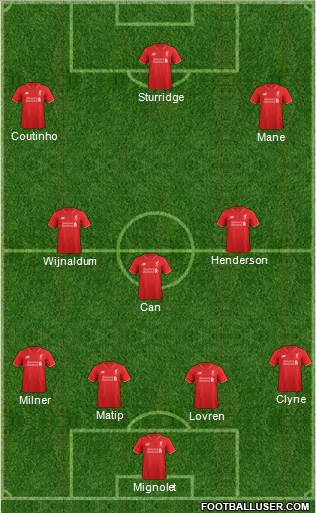 Klopp has a wealth of attacking options at his disposal. Apart from the much talked about striker surplus, he has a number of attacking players like Adam Lallana, Georginio Wijnaldum and Roberto Firmino who will all be battling for a spot in the starting line-up.

Attacking is the main emphasis of the German’s Gegenpressing style and with the players at his disposal, he may field a side without any defensive minded players in midfield at all. Wijnaldum and Henderson would play in the central role, as Brazilian Roberto Firmino is paired up with Divock Origi up front.

The efficacy of a 4-4-2 system was displayed by last season’s champions Leicester City, and Klopp might make the best of his squad by implementing a similar formation. 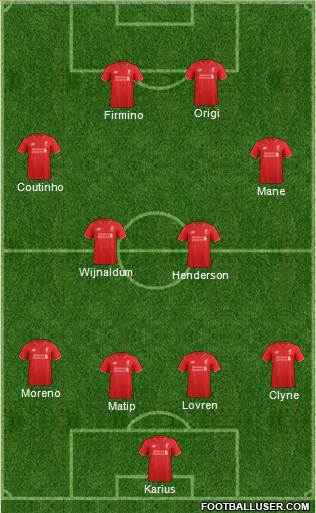