Euro 2016 showcased some of the most talented players in Europe and a few rose to the occasion in spectacular fashion. Our Euro 2016 XI includes players from Europe’s elite clubs including Barcelona, Real Madrid, Juventus and Arsenal.

A back three was the flavor of the tournament, as displayed by Wales, Italy and to an extent, Germany. Hence we’ve decided to go with a 3-4-3 formation so as to best use the players who set Euro 2016 on fire.

The French captain was one of the best keepers of the tournament, conceding just five goals in seven appearances and keeping three clean sheets. His smart saves, positioning and awareness in the box often have glossed over Les Blues’ defensive frailties.

The 28 year old centre-back was outstanding in the group stages, making the most clearances of the tournament and helping Poland keep three clean sheets. His performances earned him a move from Serie A club Torino to Ligue 1 heavy hitters AS Moanco after Poland were knocked out in the quarter-finals by Portugal.

The Azurri put on a defensive masterclass against the likes of Belgium and Spain, and Bonucci was at the heart of that solid defence. He also played the part of play maker as he set up attacks, and even took and scored his first professional penalty against Germany in the quarter-finals.

Pepe may be extremely unpopular with all those not supporting Real Madrid, but he marshaled the eventual champions Portugal throughout the tournament. His career defining performance in the finals against France puts him ahead of the likes of Jerome Boateng and Ashley Williams, who also had outstanding tournaments.

Italy’s midfielder Emanuele Giaccherini controls the ball during the Euro 2016 quarter-final football match between Germany and Italy at the Matmut Atlantique stadium in Bordeaux on July 2, 2016.
(Photo by PATRIK STOLLARZ/AFP/Getty Images)

One of the finds of the tournament, Giaccherini was indefatigable in midfield for Italy as they defended deep and attacked quickly to defy the critics and reach the quarter-finals. A tragic penalty shoot-out loss undid the good work of Antonio Conte and his men, of whom Giacherrini was one of the most impressive with a goal and an assist for a low scoring team.

For a brief period, Iniesta reminded everyone of just why Spain had been so dominant internationally from 2007 to 2013. The Barca midfielder just notched up the single assist, but his masterful passing and movement in midfield drew admiration from around the world. Italy managed to choke him out in the round of 16 though, as the defending champions crashed out.

This was the tournament when Ramsey came of age. The mercurial Arsenal midfielder is equally capable of drawing admiration and disdain, but it was the former that came his way during Euro 2016. His goal and four assists carried the Dragons to the semi-finals, where his absence because of suspension damned them to defeat against Portugal.

France’s Dimitri Payet (R) celebrates with Olivier Giroud after scoring the 2-1 during the Euro 2016 group A football match between France and Romania at Stade de France, in Saint-Denis, north of Paris, on June 10, 2016. / AFP / FRANCK FIFE (Photo by FRANCK FIFE/AFP/Getty Images)

Payet was the player who brought Euro 2016 to life with his delicious late goal against Romania. The midfielder went on to notch up three goals and two assists, as Les Blues charged to the finals. Unfortunately the last action of the tournament he will be remembered for is the foul on Ronaldo that took him out of the final.

Bale was the superstar striker feeding off Ramsey in midfield, as he scored in all three of Wales group games and forced the decisive own goal in the round of 16 against Northern Ireland. He also played an integral role in the Dragons 3-1 victory over Belgium in a match of the tournament contender.

France’s forward Antoine Griezmann celebrates after scoring a penalty shot giving France the first goal of the match during the Euro 2016 semi-final football match between Germany and France at the Stade Velodrome in Marseille on July 7, 2016.
/ AFP / FRANCK FIFE (Photo by FRANCK FIFE/AFP/Getty Images)

The Atletico Madrid hero won the golden boot by a country mile, his six goals at Euro 2016 double of what his closest competitors could muster. Griezmann was involved in more goals (8) than any other player in the tournament. He was exceptional, and after his exploits in the Champions League and Euro 2016, he is a genuine contender for the Ballon d’Or this year.

PARIS, FRANCE – JULY 10: Cristiano Ronaldo and Portugal players celebrate after their 1-0 win against France in the UEFA EURO 2016 Final match between Portugal and France at Stade de France on July 10, 2016 in Paris, France. (Photo by Lars Baron/Getty Images)

The world is divided into two types of people, those who love Cristiano Ronaldo and those who hate him. The former have reason to rejoice, as one of the greatest players of all time finally laid his hands on that elusive international trophy. He was involved in six goals in the tournament, only behind Griezmann, and his performance against Wales in the semi-finals paved the way for the eventual champions. 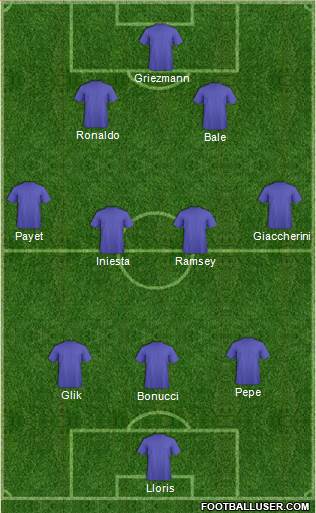