A Cristiano Ronaldo led Portugal face a high-flying Wales in the first semi-final of the European Championships as Gareth Bale and co. look to continue their dream run in France.

The two most celebrated galacticos of Real Madrid face each other in a bid to book a berth in the final of the 2016 European Championships. Portugal have not managed a single win in 90 minutes thus far, yet find themselves in the semi-final of the tournament following an extra-time win over Croatia in the round of 16 and a penalty shoot-out win over Poland in the quarter-final.

Wales, on the other hand, are the in-form team at the Euros after knocking out Belgium  — the highest ranked European team in the competition — in a convincing 3-1 win in the quarter-final. The Welsh seem to have the upper hand based on form but the Portugese have shown that they have the mental strength to achieve favourable outcomes from difficult situations.

The biggest concern for Portugal ahead of their semi-final fixture is the fitness of Real Madrid star Pepe. The central defensive player missed training on Monday, but there is optimism that he will recover for the game against Wales. Raphael Guerreiro, who missed the penalty shoot-out win over Poland, is available for selection once again but may be on the bench following Eliseu’s impressive display.

William Carvalho is unavailable after the defensive midfielder collected his second yellow card of the tournament against Poland, resulting in a one-game suspension. Meanwhile, fellow central midfielder Andre Gomes looks set to miss out due to injury.

The onus will be on Adrien Silva to keep the Portugese side ticking and make sure that the midfield keeps feeding the ball to the attacking duo of Cristiano Ronaldo and Nani. All eyes, though, are set to be on the Real Madrid superstar, who continues his search for the one thing missing from a stellar career thus far: an international trophy. The young stars of Portugal will be looking to the 3-time Ballon D’or winner for inspiration to overcome the Welsh.

The Selecao have reached at least the quarter-final of every European Championship since 1996. Their Euro run since the 1996 edition includes two previous semi-final appearances, with the latest coming in 2012. They came close to winning the Euros in 2004, but ultimately lost in the final to Greece. 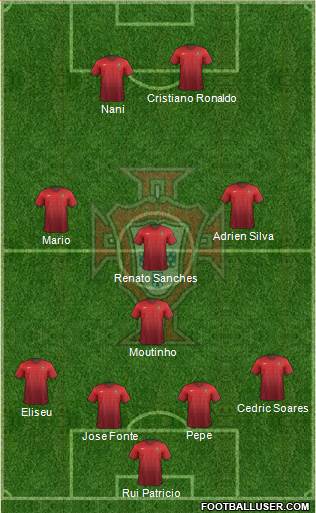 Wales have already created history by defeating Belgium in the quarter-final — a win that has brought about a first semi-final appearance in a major tournament for the country. Manchester United legend and former Wales international Ryan Giggs labelled the quarter-final win as the best moment in the nation’s footballing history.

Gareth Bale and Ashely Williams would be looking to lead the Welsh juggernaut into the finals. (Picture Courtesy- Stu Forster/Getty Images)

Wales will be missing their best player of the tournament thus far in Aaron Ramsey. The Arsenal midfielder has 1 goal and 4 assists to  his name in his 5 Euro 2016 appearances. He collected his second yellow card of the tournament after handling the ball in the 3-1 win against Belgium and will now face a one-game suspension. Left-back Ben Davies is also suspended after being booked in the quarter-final.

Liverpool midfielder Joe Allen, operating at the heart of the Dragons’ midfield, will be expected to step up in Ramsey’s absence. Gareth Bale has been excellent for his nation thus far and is the highest-rated player in the tournament, with an overall rating of 8.41 over 5 appearances according to Whoscored. He has contributed 3 goals to his nation’s cause and Coleman will be looking to the Real Madrid superstar to provide some more magical moments against Portugal.

Jonathan Williams will slot into midfield as a replacement for Aaron Ramsey and James Collins will provide some extra experience coming in for the suspended Ben Davies. Chris Coleman also has a tough decision to make with regards to his striker, but the in-form Hal Robson-Kanu is expected to get the nod ahead of Sam Vokes. 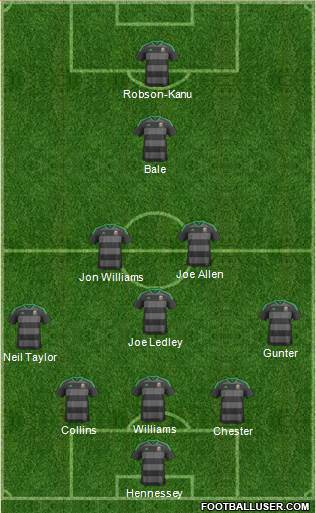 Joe Allen is set to be a key figure in the fixture and Chris Coleman will be hoping the ‘Welsh Pirlo’ weaves his magic on the pitch. (Picture Courtesy -Dennis Grombkowski/Getty Images)

The fixture is full of stars that can provide magical moments to alter the result in their nation’s favour. But Wales’ dreams of reaching an unprecedented final will depend largely on the performance of Liverpool midfielder Joe Allen. Aaron Ramsey is suspended for the fixture and in his absence, the responsibility of making the Welsh side tick lies on the shoulders of the 26-year-old. The ‘Welsh Pirlo’ will look to use his technique and passing ability to give Wales the upper hand.

Gareth Bale will be looking to outshine his Real Madrid teammate Cristiano Ronaldo and has the opportunity to finally come out of the Portuguese’s shadow. The Welsh forward has been the better performer at Euro 2016 thus far and a win in this match could go a long way towards meeting Gareth Bale’s ambition to be the main man at the Santiago Bernabeu.

Portugal have a star-studded lineup with a young midfield core that features some of the brightest young prospects in the world. But the Selecao have been underwhelming in their appearances thus far and have somehow managed to edge their competitors in their run to the semi-final. Wales are arguably on the best run in the nation’s footballing history and the juggernaut looks like one that is set to march on.

Both teams are heavily stacked on the attacking front and are likely to score on Wednesday. Given they are evenly matched on paper and based on Portugal’s results thus far in the competition, the tie is likely to extend beyond regulation time. The Dragons, though, hold a slight edge over the Portuguese based on form and are likely to overcome the Ronaldo-led team despite missing Aaron Ramsey at the heart of the midfield.