Barcelona ace Ousmane Dembele reportedly has a contract offer from Liverpool on his table amid interest from Chelsea and other European bigwigs.

According to a report by Spanish publication SPORT, Ousmane Dembele has five offers on his table heading into the summer transfer window, including one from Liverpool. The Barcelona forward is also a target for Chelsea, Bayern Munich and Paris Saint-Germain over a possible Bosman move.

Ousmane Dembele could be about to leave Barcelona just when he has started to deliver on the immense promise and potential he possesses. The French international had been a frustrating figure in the first four and a half years of his stint with Barcelona, with attitude issues, fitness woes and poor form hampering his progress.

But Dembele rose to the occasion in the second half of the 2021/22 season, ending the campaign with more assists than anyone else in La Liga (13) despite playing only 21 games. But while the 25-year-old has been one of the best Barcelona players under Xavi Hernandez, his contract situation has left the Blaugrana agitated. At the same time, Liverpool, Chelsea, and other European bigwigs have set their sights on him.

The interest from Liverpool stems from the departure of Sadio Mane, who will officially complete his move to Bayern Munich later this week on July 1. While the Reds have signed Darwin Nunez, the Uruguayan international is not a like-for-like replacement for Mane. Dembele has thus emerged as a viable target for Liverpool. 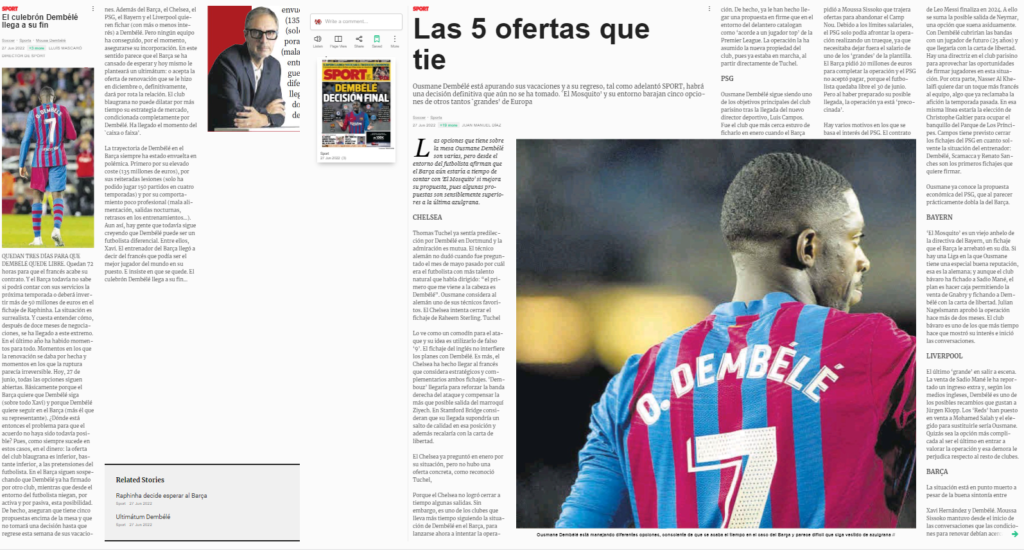 With Mohamed Salah’s future up in the air, Liverpool might need to sign a top-class wide-attacker this summer to compete on all fronts in the coming season. But Liverpool will have to fend off stiff competition from Chelsea to secure the services of the Barcelona forward.

The Blues were once regarded as the favourites to sign Dembele from Barcelona. But the 2018 FIFA World Cup winner’s fitness record has prompted Chelsea to reconsider pursuing him amid growing links with Raheem Sterling. At the same time, the contract offer from Chelsea has left Dembele dismayed.

Apart from Liverpool and Chelsea, Bayern Munich and Paris Saint-Germain have also tabled offers to sign the 25-year-old. But Barcelona will hope that with every passing day, Dembele gets closer to committing his long-term future to the Catalan club, even though their prospects look bleak right now.