Germany will aim to usurp Hungary in the UEFA Nations League Group A3 when the two teams clash at the Red Bull Arena Leipzig on Friday.

Clubs across the world are waiting with bated breaths for the end of the last international break of 2022, but there is still plenty of time for that. Matchday 5 of the UEFA Nations League continues on Friday, when Germany will play hosts to Hungary in Group A3, with Italy and England locking horns in the other fixture of a group that is evenly poised heading into the final two rounds of fixtures.

Hansi Flick has overseen a decent turnaround in fortunes since replacing Joachim Low as the Germany head coach. While Die Mannschaft’s results do not necessarily reflect the change, they remain unbeaten in the ten games under the tutelage of Flick. Four of those fixtures have come in the UEFA Nations League, with Germany beating Italy while playing out draws against England and Hungary to be second in Group A3.

On the other hand, Marco Rossi has overseen a pleasantly surprising output from Hungary, with the Magyarok proving they are no pushovers in a group laden with powerhouses. While Hungary lost to Italy, the two wins over England have propelled them to the top of Group A3, thus making 2022 a memorable year thus far, even though they will not participate in the World Cup.

The reverse fixture, played at the Puskas Arena in June, saw Germany come from a goal down to beat Hungary 1-0, with Jonas Hofmann cancelling Zsolt Nagy’s strike. Ahead of the latest meeting between the two sides, The Hard Tackle takes a closer look at the Nations League encounter.

Hoffenheim's Oliver Baumann has been called up as a replacement goalkeeper. Any further squad additions will be announced later in the day. pic.twitter.com/DldbHWFgPZ

Hansi Flick had not made many notable omissions from the squad he picked in June ahead of the meetings with Hungary and England. But a few players have withdrawn their names this week due to injuries or other issues.

Manuel Neuer and Leon Goretzka are the most notable absentees for Germany, with the Bayern Munich duo recovering from COVID-19. Flick has replaced Neuer and Goretzka with Oliver Baumann and Maximilian Arnold, respectively. In addition, Marco Reus and Julian Brandt have also left the Germany camp and will not feature against Hungary.

Neuer’s absence means Marc-Andre ter Stegen will get a rare chance to make an impression, with the 30-year-old set to earn his 29th cap for Germany. The hosts will line up in a 4-2-3-1 formation against Hungary, with the system allowing the players more fluidity, as it can evolve into a 3-4-3, depending on the game’s phase.

Thilo Kehrer will likely start as the right-back. But the 26-year-old will tuck in as a centre-back when the formation switches to a 3-4-3, with Niklas Sule and Antonio Rudiger being the central defenders. David Raum will have a more offensive role in the team, with the 24-year-old taking his place as the left-back.

Ilkay Gundogan picks himself in the double-pivot, with the experienced midfielder lining up alongside Joshua Kimmich in a forward-thinking midfield setup. Jonas Hofmann will be the right-winger while also presuming the role of a right wing-back, allowing Thomas Muller and Leroy Sane to tuck in central roles, supporting Timo Werner, who will spearhead Germany’s attack against Hungary. 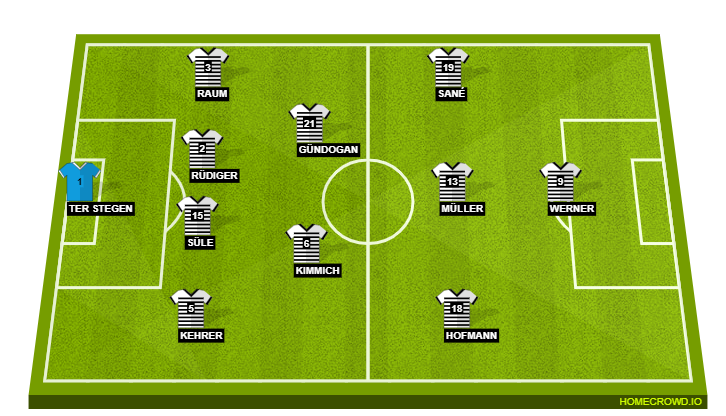 Unlike his counterpart in the Germany dugout, Marco Rossi has a much more stable squad at his disposal ahead of the latest UEFA Nations League fixtures. Zsolt Nagy and Roland Sallai are the only notable absentees for Hungary due to their respective fitness issues.

Peter Gulacsi picks himself between the sticks for Hungary, who will line up in a 3-4-2-1 formation against Germany on Friday. The central defensive unit picks itself, with Adam Lang, Willi Orban and Attila Szalai being automatic selections at the back.

Rossi is spoilt for choice for the right wing-back slot, with Attila Fiola expected to get the nod ahead of Loic Nego in the position. While Fiola can also slot in on the opposite flank, the Hungary head coach will likely give the uncapped Milos Kerkez the opportunity to shine against Germany.

Adam Nagy is one of the senior-most players in the Hungary squad, and the 27-year-old will be responsible for keeping Thomas Muller quiet on Friday. Callum Styles will likely provide defensive support to Nagy in the middle of the park, with Laszlo Kleinheisler and Andas Schafer being backup options for Rossi.

Dominik Szoboszlai will provide the creative impetus higher up the pitch, with Daniel Gazdag starting alongside the 21-year-old in a central role. Finally, Hungary captain Adam Szalai will lead the line for his side against Germany, with Kevin Varga and Martin Adam being backup options. 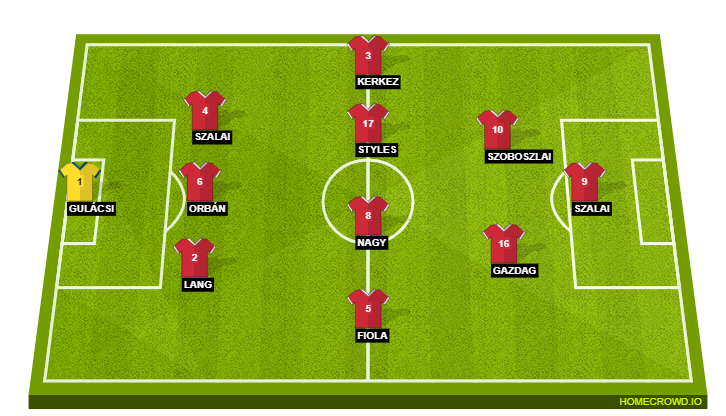 Jonas Hofmann has been the in-form player for Germany, which should be considered to be a big thing as he is a part of a squad laden with star power and world-class players. But the 30-year-old has stood in the last few games, either scoring or assisting a goal in each of his last three outings for Germany.

Hofmann also lends Germany some fluidity across the pitch due to his offensive output and work rate off the ball. And the two UEFA Nations League games will be his auction to nail down his spot as one of the first-choice players for Hansi Flick heading into the 2022 FIFA World Cup in Qatar.

Germany cannot take Hungary lightly, with the visitors already holding Die Mannschaft to a 1-1 draw in the reverse fixture in June. But the hosts are moving in the right direction under the tutelage of Hansi Flick and might be too strong for Hungary.

Nonetheless, a largely evenly-contested affair should be on the cards at the Red Bull Arena in Leipzig on Friday before the hosts seal the deal. The Hard Tackle predicts Germany to beat Hungary 2-1 and leap to the top of the UEFA Nations League Group A3 standings.