Belgium will be eyeing a win when they welcome Wales to the King Baudouin Stadium in the UEFA Nations League on Thursday.

Knowing a win could keep their hopes of qualifying to the next stage alive, Belgium will try to muster the three points against Wales at the King Baudouin Stadium. In the midst of their World Cup qualifying campaign, Wales have not had the chance to focus on the UEFA Nations League as just one draw from their opening four matches unsettled their nerves.

Belgium sit second in Group A4 and will be pushing hard for a result this time as their sole intention is to finish the international break as group toppers. They drew 1-1 with Wales in the last two meetings but will need a positive result this time should they want to pile more pressure on leaders Netherlands, who face Poland on Thursday.

The Dragons ended their 64-year barren run in the World Cup and will fly to Qatar to be a part of the football extravaganza later this year. But before that, they need to address their UEFA Nations League form as they could be on the verge of relegation to League B.

An untimely defeat to Poland followed by a narrow loss at the hand of the Netherlands handed the Wales their worst start in the competition. They managed a draw with Belgium in the next game but another late winner by the Oranje submerged them deep in relegation trouble.

Belgium were shocked by the Netherlands in their first group stage game as the Oranje shot past four goals against a hapless Simon Mignolet. They were quick to recover from that defeat as they thrashed Poland 6-1 to get their Nations League campaign back on track.

But Belgium squandered a chance to make up ground as they drew with Wales, even as the Netherlands dropped points against Poland on the same matchday. The Red Devils concluded the June international break with a scrappy win over Poland and will hope to bank on their home comfort against Wales.

Robert Page has done a tremendous job by knitting back Wales’ World Cup dream. But with the relegation danger looming large in the UEFA Nations League, Wales can ill-afford any more slip-ups at this stage. The stage would be set for a royal finale with Poland, but they need to make sure they leave the Belgian soil with the three points.

A number of key players were rested in the 1-0 win against Poland, and they are set to be recalled for this high voltage clash. Thibaut Courtois will be back in goal, and he will be guarded by a three-man back line of Dedryck Boyata, Jan Vertonghen and Toby Alderweireld.

Yannick Carrasco could replace Thorgan Hazard in the left wing-back slot, while Timothy Castagne will continue his errands in the right wing-back position.

Axel Witsel and Youri Tielemans will man Belgium’s midfield, and they will have to square it on a regular basis on both sides of the pitch. Kevin De Bruyne will take his position on the right wing and Eden Hazard will see himself on the opposite flank. Finally, Michy Batshuayi should lead the line for Belgium against Wales.

Joe Allen and Aaron Ramsey are nursing injuries and are not a part of the travelling squad as Wales get set to take on Belgium at the King Baudouin Stadium on Thursday night.

Wayne Hennessey is a certain starter in the goal for Wales. Joe Rodon, Ethan Ampadu and Ben Davies will throw themselves in front of the Belgian attackers. Neco Williams and Connor Roberts will feature in the left and right wing-back positions, respectively.

Joe Morrell and Matt Smith are expected to man the engine room in the middle of the pitch for Wales, and they will have a tough task to cut out Belgium. It is impossible to imagine a Wales lineup without the inclusion of Gareth Bale. 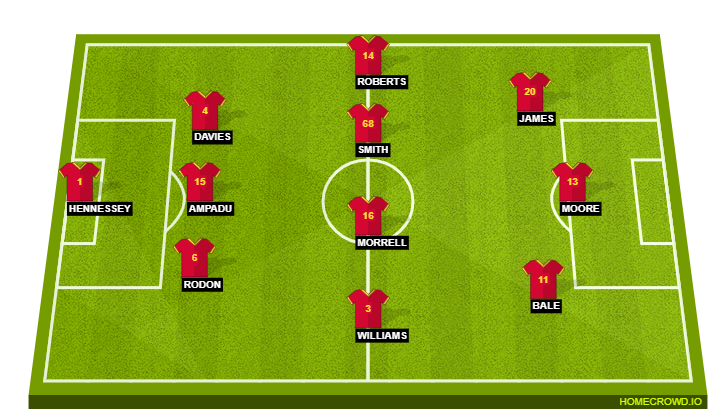 If you provide Gareth Bale with an inch of space, he will make you pay. Persistent injuries have had an impact on his game, but the 33-year-old is still agile enough to inflict enough damage on the best of defences in his day.

The Los Angeles FC player has had the knack for scoring important goals at times, and he was also one of the catalysts for sending his country to the 2022 FIFA World Cup. Whether he can step up to the plate against Belgium will be interesting to see.

It can be said with confidence that this match will go either way as both the teams will be anticipating a tough stance from their opponents. Belgium do have a superior depth, and they will stand out as the winner. The Hard Tackle predicts a hard-fought encounter, with the Red Devils beating Wales 2-1 in the end.