Tottenham Hotspur will try to maintain their perfect start when they visit Estadio Jose Alvalade to take on Sporting CP on Tuesday.

Followed by a rest on the weekend, Tottenham will try to conquer an in-form Sporting CP, who started to make an impact finally and stamped their authority with a deserving win over Eintracht Frankfurt in the last match.

An initial announcement on Tottenham’s official website had stated that the match will be postponed, but the north Londoners were quick to clarify that the game will go ahead as per schedule, and the minor glitch has been resolved.

A Richarlison brace helped Antonio Conte’s men to send out a statutory warning to the other teams in their group. But they were made to toil hard by a disciplined Marseille side which could be exploited by their opponent.

Sporting CP are trying to build momentum on the back of three wins in all competitions, and they might be in for their first win over an English side in a competitive fixture. The Portuguese giants have never been able to string consecutive wins in the UEFA Champions League group stage, so they also have to fight out the odds.

Son Heung-min will likely have another opportunity to douse his poor form as the South Korean international is yet to open his account. And Richarlison’s good form means he is no longer an untouchable in the squad.

Following a rare weekend off, Conte will have the luxury to field the same team that got the better of Marseille in the last Champions League fixture. A win over reigning champions Manchester City would have been the ideal scenario prior to this clash, but they have to build the momentum from the scratch.

Sporting CP did not have the luxury to enjoy a free weekend as they thrashed Portimonense 4-0 in the Primeira Liga. The hosts would be looking forward to replicating their form against north London giants Tottenham.

However, Sporting CP did not seem to enjoy the victory completely as they suffered some injury setbacks. Luis Neto and Goncalo Inacio hobbled off the pitch and are now doubtful for this crunch game.

Inacio’s injury is not as bad as expected, and he could be fit in time for the game. But Neto could be sidelined for a longer period. Neto will join Jeremiah St. Juste in the treatment room, with the Dutchman sustaining a muscular problem against Eintracht Frankfurt.

Antonio Adan will be in his regular duty between the sticks. Ricardo Esgaio could slot in the central defensive unit in the absence of Neto in the backline. He will be assisted by Sebastian Coates and Goncalo Inacio to resist any kind of Tottenham attack.

Pedro Porro will start in the right wing-back position, while Matheus Reis will be given a chance on the other side. Manuel Ugarte is gunning for a start, and he will have the responsibility to strike a chord with his midfield partner Hidemasa Morita.

Pedro Goncalves started the match in an unusual midfield position but he will be drafted into the left wing. Francisco Trincao will try to engage with the Tottenham defence from his favourable right-hand side, and Marcus Edwards will spearhead the Sporting CP attack.

The weekend relief should have allowed Antonio Conte to repeat his playing eleven. Except for Lucas Moura, the Tottenham Hotspur manager will take a full-fit squad to Lisbon, as they look to make it two in two in the UEFA Champions League.

Hugo Lloris will be guarded by the rearguard of Eric Dier, Cristian Romero and Clement Lenglet. Pierre-Emile Hojberg will once again be installed into the middle of the pitch, as he has been Conte’s go-to man when it comes to adding a different flavour to the team.

Rodrigo Bentancur’s incomparable energy will definitely complement Tottenham as the duo will try to tame down Sporting CP’s spirit at their fortress. Emerson Royal and Ivan Perisic will try to provide some width, and they will be advised to join the attack more regularly.

Richarlison’s brilliant brace will definitely help him to nail down a place in the starting eleven, while Son Heung-min will get another chance to end his goal drought. Harry Kane will undoubtedly start as the lone frontman for Tottenham against Sporting. 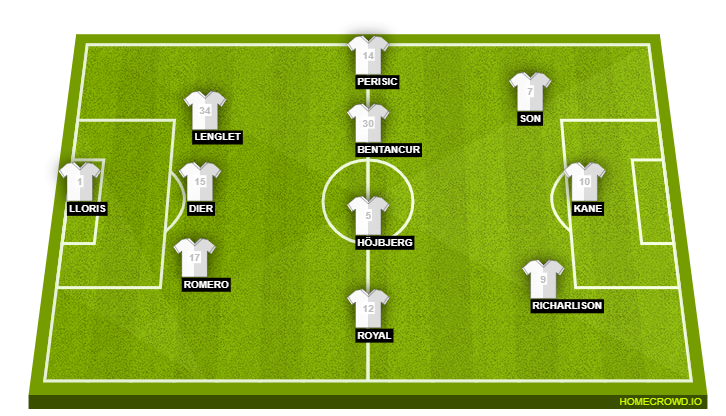 Richarlison will be looking to build on his brace against Marseille, as the Brazilian toyed with the French outfit in his usually mercurial. The former Everton forward has announced his arrival on the continental stage with a bang, and should he maintain his course, he could emerge as the preferred choice for Antonio Conte in the games to come.

The absence of Neto could be pivotal for the visiting side, who have shown their attacking instincts throughout this season. They are yet to be defeated this season, and the trio of Son Heung-min, Harry Kane and Richarlison can invade any kind of defence on their day. The Hard Tackle predicts a 2-0 win for Tottenham against Sporting CP.