Barcelona will aim to strongly begin the 2022/23 UEFA Champions League campaign when they welcome Viktoria Plzen to Camp Nou on Wednesday.

Matchday 1 of the 2022/23 UEFA Champions League group stage will culminate on Wednesday, with eight matches on show on the day. Barcelona will be one of the teams in action, with the Blaugrana set to play hosts to Viktoria Plzen at the Spotify Camp Nou on Wednesday night.

Barcelona’s 2022/23 campaign has started superbly, with the Blaugrana winning three of the first four competitive fixtures. The only other outing ended in a goalless stalemate in their season opener, with Xavi Hernandez’s men often scoring goals for fun since then and rising to the second spot in La Liga.

Like Barcelona, Viktoria Plzen’s campaign in the domestic league has started on an unbeaten note, with the Czech champions yet to taste defeat and sitting in the second spot in Fortuna Liga. They also cruised through the qualification process to reach the UEFA Champions League group stage, where they feature in Group C alongside Barcelona, Bayern Munich, and Inter Milan.

The only other clashes between Barcelona and Viktoria Plzen ended in victories for the Catalan giants, in the 2011/12 UEFA Champions League group stage (2-0 at home and 4-0 away). Ahead of the latest meeting between the two sides, The Hard Tackle takes a closer look at the encounter.

Xavi Hernandez does not have any pressing injury concerns hampering his preparations ahead of the visit of Viktoria Plzen. The Barcelona manager will have a full-strength squad at his disposal on Wednesday, although he has omitted two players from the matchday squad.

Hector Bellerin and Marcos Alonso, who Barcelona officially presented as the Catalan club’s latest signings on Tuesday, will not feature against Viktoria Plzen on Wednesday. The two Spanish full-backs are building up their match fitness after being off the pitch in August, and Xavi will slowly ease them into the action.

Alonso’s absence means Alejandro Balde picks himself as the left-back, with Jules Kounde set to continue as the right-back. But Eric Garcia might get some rest against Viktoria Plzen, with Andreas Christensen in line to pair up with Ronald Araujo at the heart of the Barcelona defence, which will protect the in-form Marc-Andre ter Stegen.

Frenkie de Jong might be in for a start against Viktoria Plzen, with Gavi earning some rest after a few excursions at the onset of the 2022/23 season. The Dutch midfielder will join Sergio Busquets and Pedri in the middle of the park.

Ousmane Dembele will also be due to get some well-deserved rest, with Ansu Fati expected to replace the French attacker. Robert Lewandowski will spearhead the Barcelona attack against Viktoria Plzen, with Raphinha completing the offensive unit for the hosts. 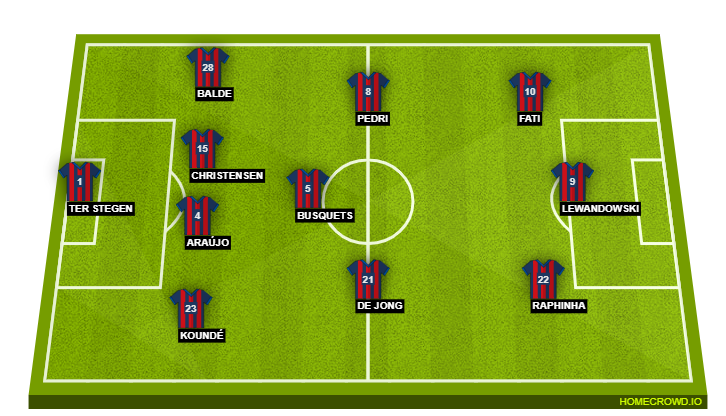 Unlike his counterpart in the Barcelona dugout, Michal Bilek does not have a clean health bill ahead of the trip to the Spotify Camp Nou. The Viktoria Plzen manager will be without one first-team player on Wednesday, with Petr Pejsa recovering from a long-term knee injury.

Bilek prefers to line Viktoria Plzen in a 4-2-3-1 setup, and Jindrich Stanek will see his teammates take up a similar formation in front of him. Lukas Hejda and Ludek Pernica will form the central defensive partnership, with Libor Holik and Vaclav Jemelka starting as the two full-backs.

Pavel Bucha should replace Ales Cermak in the midfield double-pivot, providing defensive support to Lukas Kalvach in the middle of the park. Jan Sykora has revelled in the no. 10 role this season, and he should play just behind the central striker – Tomas Chory.

Chory, who had been directly involved in four goals in six appearances in this season’s Champions League qualifying stage, will be the danger man for Viktoria Plzen. Jhon Mosquera and Jan Kopic will be the two wide attackers against Barcelona, with Adam Vlkanova and Fortune Bassey being backup offensive options on the bench. 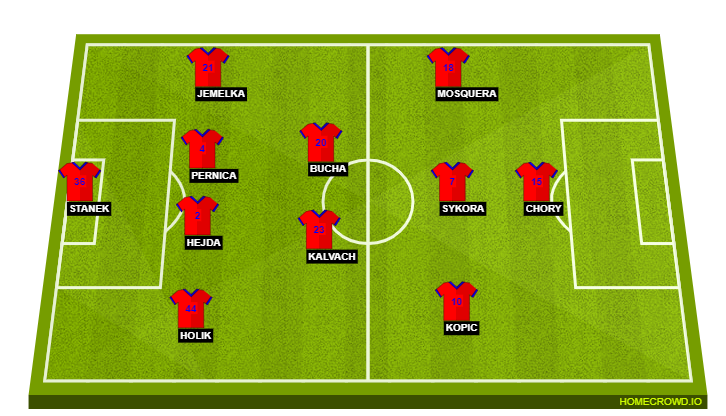 Robert Lewandowski has taken to La Liga and the challenges at FC Barcelona like fish to water, and the next challenge is to take the UEFA Champions League by storm. The Polish striker was a revelation in the competition during his days at Bayern Munich, often scoring goals for fun.

The veteran striker has what it takes to singlehandedly guide Barcelona to the knockout rounds, even though Barcelona’s group also contains Bayern Munich and Inter Milan. Lewandowski and Barcelona start with a slow burner against Viktoria Plzen, and he will hope to continue his superb run on Wednesday.

Viktoria Plzen might not be pushovers despite the gulf in quality, and the visitors should give Barcelona a run for their money. But the Catalan giants are undeniable right now, with Robert Lewandowski leading their charge across all competitions since arriving from Bayern Munich.

Barcelona will have to deal with a stubborn Viktoria Plzen defence before gradually growing into the game. The Blaugrana should eventually get the better of the Czech champions, with Lewandowski continuing his fine run of form by guiding the hosts to a 3-0 win on Wednesday.