Manchester United will aim to continue the recent winning run when they take on Leicester City at the King Power Stadium on Thursday.

The curtains will fall on Gameweek 5 of the 2022/23 Premier League season on Thursday with a game at the King Power Stadium. Leicester City will play hosts to Manchester United on the day, with the hosts looking to get their first win of the campaign and the visitors hoping to build a solid run of form.

Leicester City might not have envisioned to be sitting at the bottom of the Premier League table when the 2022/23 season began, despite the lack of spending at the Midlands club. But Brendan Rodgers has struggled to galvanise his squad thus far, with the Foxes taking home just one point from four games thus far. And Leicester’s last three games have all ended in defeat.

Like Leicester, Manchester United sat at the bottom of the Premier League standings after losing their first two games of the season. But the Red Devils have found some form in their last couple of outings, beating Liverpool and Southampton by the odd goal to climb into the top half ahead of the latest gameweek. And Erik ten Hag will hope Manchester United’s current run continues.

The corresponding fixture last season saw Leicester City come from behind to beat Manchester United 4-2 in what was the beginning of the end for Ole Gunnar Solskjaer as the Red Devils boss. Ahead of the latest meeting between the two sides, The Hard Tackle takes a closer look at the encounter.

Brendan Rodgers says that he is "hopeful" that James Maddison will be available for Thursday night's match with Manchester United.

The City boss confirms that he will be assessed tomorrow. pic.twitter.com/xgNIcT6ZMX

Brendan Rodgers does not have any injury concerns hampering his preparations ahead of the visit of Manchester United. On Thursday, the Leicester City manager might be bereft of the services of as many as three first-team players.

Rodgers is sweating over the fitness of James Maddison, in particular, with the English playmaker recovering from a knock, although he might have a chance to feature against Manchester United. But Ricardo Pereira (Achilles) and Ryan Bertrand (knee) remain on the sidelines due to their respective injuries.

Since Kasper Schmeichel’s departure from the King Power Stadium, Danny Ward has established himself as the new first-choice goalkeeper for Leicester City. The Welsh international will see his team line up in a 4-3-3 formation against Manchester United, with Timothy Castagne and James Justing starting as the two full-backs.

Daniel Amartey will continue to pair up with former Manchester United centre-back Jonny Evans at the heart of the Leicester City defence as the Foxes continue to scour the market for a replacement for the Chelsea-bound Wesley Fofana. Up ahead in midfield, Wilfred Ndidi will hope to return to the starting eleven.

Ndidi will hope to keep a lid on Bruno Fernandes’s output, with Kiernan Dewsbury-Hall and Youri Tielemans providing him defensive support. But Dewsbury-Hall and Tielemans will primarily look to provide the forward thrust to Leicester from the middle of the park.

Jamie Vardy will spearhead the Leicester City attack against Manchester United and aim to use his deadly change of pace to good effect against Raphael Varane. In addition, the tricky Harvey Barnes can give Diogo Dalot some trouble with his nippiness. Finally, Ayoze Perez should return to the team if Maddison is not fit enough to start. 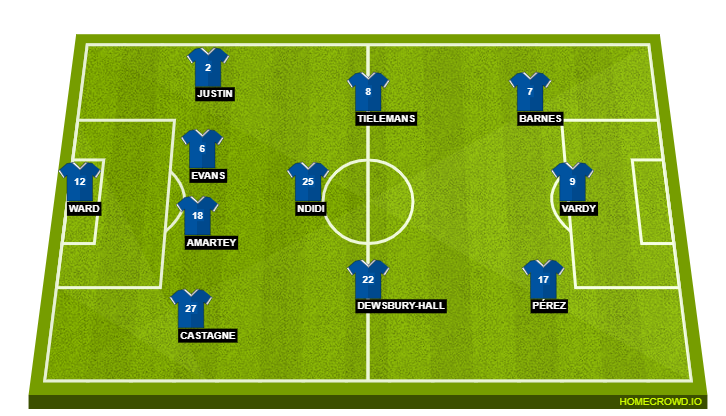 Like his counterpart in the Leicester City dugout, Erik ten Hag should have the same resources at his disposal as he did this past weekend ahead of the trip to the King Power Stadium. The Manchester United manager will be without four first-team players on Thursday.

The major absentee for Manchester United is Anthony Martial, with the Frenchman nursing an Achilles injury. While Martial unlikely to return against Leicester, he will likely be back in the starting eleven on the weekend against Arsenal, which will have more stakes. The other players on the sidelines are Victor Lindelof, Brandon Williams and Facundo Pellistri.

🔊 "I have seen a couple of [Leicester's] games, but we know from last season how good they are.

"Their identity is really clear and they play good football, so we have to perform really well to get a result there." 👊#MUFC || #LEIMUN

David de Gea remains the first-choice goalkeeper for Manchester United despite his shortcomings in Erik ten Hag’s system. And the visitors will take up a 4-2-3-1 formation against Leicester City, with Raphael Varane and Lisandro Martinez continuing their solid central defensive partnership.

The duo made a solid impression again versus Southampton this past weekend and will continue to forge their partnership. Diogo Dalot is irreplaceable at right-back currently, while Tyrell Malacia has seemingly usurped Luke Shaw on the left flank after a couple of solid displays.

Casemiro should make his first start for Manchester United against Leicester after appearing off the bench on Saturday for his debut. The Brazilian international will strengthen Manchester United’s midfield, with Christian Eriksen and Bruno Fernandes providing defensive support.

Eriksen and Bruno Fernandes will also generate the creative impetus from the central areas, looking to push Marcus Rashford and Jadon Sancho forward. Meanwhile, Anthony Elanga might start ahead of Cristiano Ronaldo again, with the Swede looking to trouble James Justin with his directness. 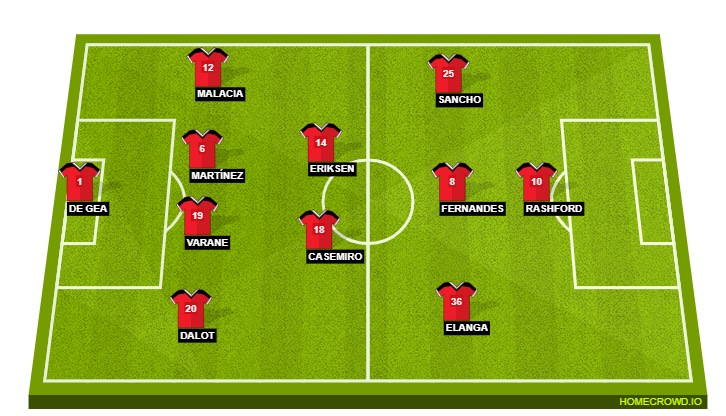 BREAKING🚨: Erik ten Hag says Cristiano Ronaldo 'very much' part of his squad plans, while he expects no more incomings at #MUFC pic.twitter.com/uMIkFuK51I

Cristiano Ronaldo is not a happy camper at Manchester United right now as he is unable to seal a move to a club in the UEFA Champions League. In addition, the legendary striker has failed to win over Erik ten Hag, who has relegated him to the bench in the last two games. But Ronaldo will be out to prove a point when he invariably takes the pitch against Leicester City.

Ronaldo has scored in all three of his Premier League appearances on Thursdays (versus Arsenal, Burnley and Chelsea last season). Only three players have played more games on a particular day of the week and scored in each one in the Premier League, those being Mohamed Salah on Fridays (five), Thierry Henry on Fridays (four) and DJ Campbell on Tuesdays (four).

So Ronaldo, a player for whom records matter the most, will be desperate to find the back of the net against Leicester City. It will be interesting to see if that happens by coming off the bench or taking up a starting berth for Manchester United this midweek.

Manchester United might have clinched back-to-back wins, but they look vulnerable at the back. However, last week’s twin victories will have given Erik ten Hag and his charges the confidence to approach a game with vigour instead of fallen shoulders. And the prospect of climbing into the European places with a win will be motivation enough for Manchester United.

Leicester City will be a tough nut to crack, even though they remain rooted at the bottom of the Premier League table. The Foxes have looked dangerous in the final third thus far this season, but their defensive frailties have been their undoing.

With Bruno Fernandes and Christian Eriksen picking up form, Manchester United should clinch the three points. And Cristiano Ronaldo should come off the bench to seal a solid victory for the visitors. The Hard Tackle predicts a 3-1 win for Manchester United, with Jamie Vardy scoring for Leicester City.