Manchester United will hope to build on this week’s win over Liverpool when they take on Southampton at St. Mary’s on Saturday.

The 2022/23 Premier League season continues on Saturday with Gameweek 4, with matches set to come thick and fast from this weekend. The latest round of fixtures will begin with a lunch-time kick-off at St. Mary’s, where Southampton will play hosts to Manchester United, with both teams looking to build on their first win of the campaign.

Southampton started the 2022/23 season with a heavy defeat to Tottenham. But Ralph Hasenhuttl would have taken heart from the spirit his team showed in the first half, building on it to go back-to-back games without defeat. The Saints played out a 2-2 draw with high-flying Leeds United in Gameweek 2 before beating Leicester City last weekend to climb to 11th on the Premier League table.

On the other hand, Manchester United got off the mark earlier this week on Monday with a shock 2-1 win over bitter rival Liverpool. The Red Devils began the season with successive defeats, falling to Brighton & Hove Albion on the opening weekend before Brentford trounced them 4-0 two weeks ago. But Erik ten Hag’s charges will be buoyed by the display against Liverpool.

The corresponding fixture last season saw Manchester United come from a goal down to hold Southampton to a 1-1 draw. Ahead of the latest meeting between the two sides, The Hard Tackle takes a closer look at the encounter.

Hear from Ralph Hasenhüttl as he previews #SaintsFC’s clash with #MUFC: https://t.co/eybDdxQimN

Ralph Hasenhuttl has greeted positive news on the team news front ahead of Manchester United’s visit to St. Mary’s. On Saturday, the Southampton manager will only be bereft of the services of one first-team player, with Valentino Livramento nursing a long-term injury.

The good news is that Romain Perraud has recovered from his injury, resuming training in the build-up to the clash on the weekend against Manchester United. While the French defender faces a late fitness test, he should start on Saturday, pushing Moussa Djenepo to a more advanced role on the left flank.

Perraud will start as the left-back for Southampton, with Kyle Walker-Peters picking himself on the right flank. Armel Bella-Kotchap should form the central defensive partnership with Mohammed Salisu, with Gavin Bazunu starting between the sticks for Southampton.

James Ward-Prowse has enjoyed Romeo Lavia’s company in the middle of the park, with the duo looking to negate the influence of Manchester United’s creative midfielders Bruno Fernandes and Christian Eriksen on Saturday. Ward-Prowse will also pose a threat during set-piece situations.

Djenepo will start on the left flank, meaning Adam Armstrong will drop to the bench. And Che Adams is an automatic pick to spearhead the Southampton attack against Manchester United after his match-winning performance against Leicester City. Mohamed Elyounoussi will reprise a central role again, with Joe Aribo starting on the right wing. 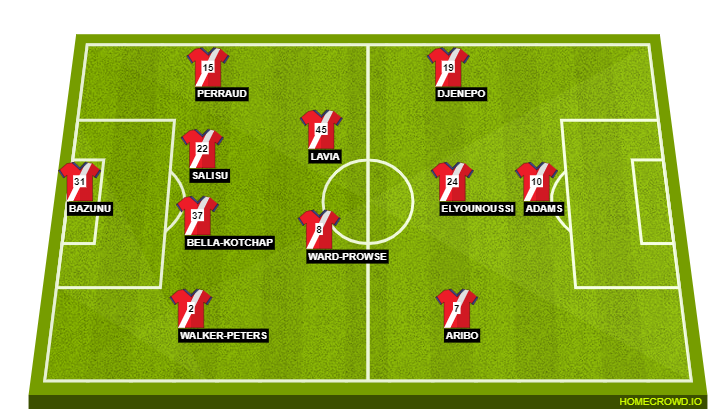 Unlike his counterpart in the Southampton dugout, Erik ten Hag has a new injury concern hampering his preparations ahead of the trip to St. Mary’s. The Manchester United manager will be without four first-team players on Saturday.

Anthony Martial has picked up an Achilles injury and will not feature against Southampton. Victor Lindelof is the other major absentee for Manchester United, with the Swede still recovering from a knock. Apart from Lindelof, Facundo Pellistri and Brandon Williams are on the sidelines and will play no part for the visitors against Southampton.

Erik ten Hag should make minimal changes to the team that beat Liverpool on Monday. But he will likely hand Casemiro a debut on Saturday, with the Brazilian international replacing Scott McTominay at the base of the Manchester United midfield. Bruno Fernandes and Christian Eriksen should retain their spots, with the duo being creative supremos for the Red Devils.

The only other change to the starting eleven will likely see Cristiano Ronaldo return, with Martial the likely starter if he was fit. Marcus Rashford and Jadon Sancho were on the scoresheet against Liverpool and pick themselves as the wide attackers for Manchester United against Southampton.

Raphael Varane and Lisandro Martinez were colossal versus Liverpool and should continue to forge their central defensive partnership, with Diogo Dalot and Tyrell Malacia starting as the full-backs again. David de Gea picks himself between the sticks for Manchester United against Southampton. 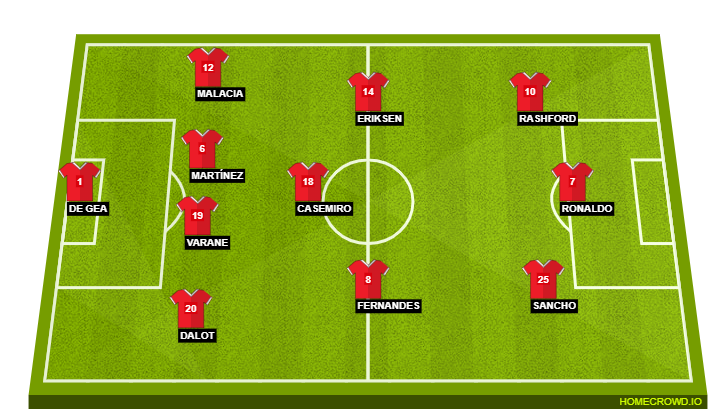 Who else but Casemiro deserves to feature in this section this weekend? The Brazilian midfielder officially became a Manchester United play in front of a rapturous Old Trafford crowd earlier this week and will aim to hit the ground running against Southampton.

There is no reason for Erik ten Hag to ease the Brazilian into the team, considering he has already played one competitive game this season. Casemiro’s addition to the starting eleven should immediately bolster the solidity in the middle of the park, providing Lisandro Martinez and Raphael Varane ample cover.

The match pits two teams against each other in desperate need to reverse abysmal records. While Southampton will be eager to do better at home and clinch back-to-back wins in the Premier League for the first time since February. On the other hand, Manchester United will look to be victorious in consecutive Premier League games for the first time since February.

So the game on Saturday should be a classic dogfight, with the two teams scrambling to find the back of the net. Southampton might even score first, but a motivated Cristiano Ronaldo should reverse the tide and get his side the three points. The Hard Tackle predicts a 2-1 win for Erik ten Hag’s charges.