Bayern Munich take on Borussia Monchengladbach at the Allianz Arena on Saturday, and the Bundesliga champions will look to extend their fine run of form with a home win.

Julian Nagelsmann’s side have picked up three wins out of three in the league so far, and they will be full of confidence heading into this game. Bayern Munich managed to pick up a thumping 7-0 win over Bochum last time out, and they will be hoping to build on it and secure another comfortable victory in front of their fans.

The Bavarian giants have an exceptional squad at their disposal, and they will be hoping to put some daylight between themselves and second-placed Gladbach on Saturday evening at the Allianz Arena.

Meanwhile, Borussia Monchengladbach have done quite well in the Bundesliga, having picked up two wins and a draw from their three outings.

Gladbach have done exceptionally well against Bayern Munich in the recent meetings and the away side are coming into this game on the back of four wins and a draw from the last six meetings against the Bavarian giants. The visitors have picked up two back-to-back wins against Bayern Munich including a 5-0 thumping on their own turf. They will be looking to pull off another upset here.

Leon Goretzka is the only notable injury concern for Bayern Munich this weekend, and the star midfielder is still sidelined following knee surgery. The German international is expected back in action sometime later next month.

Meanwhile, Julian Nagelsmann will be delighted to have the likes of Serge Gnabry and Dayot Upamecano back from their injuries. That said, Lucas Hernandez is expected to partner Matthijs de Ligt at the heart of Bayern Munich’s defence despite the return of Upamecano.

Meanwhile, Gnabry is expected to line up alongside Thomas Muller and Kingsley Coman in an attacking midfield triumvirate just behind Sadio Mane, who is expected to lead the line for Bayern Munich against Borussia Monchengladbach. 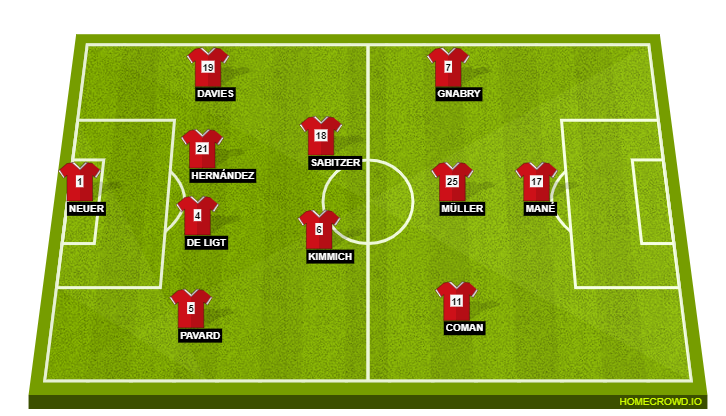 The visitors have no notable injury concerns ahead of this game, and the likes of Lars Stindl, Nico Elvedi, Ramy Bensebaini and Ko Itakura have all recovered from their knocks.

Marcus Thuram and Alassane Plea are expected to lead the attack for the visitors in a 4-3-3, and they will be hoping to cause all sorts of problems for the Bayern Munich defence, who struggled to cope against them last season.

Elvedi, Bensebaini and Itakura’s fitness updates could not have been better timed as Gladbach prepare to take on one of the best attacks in world football when they take on Bayern Munich on Saturday. 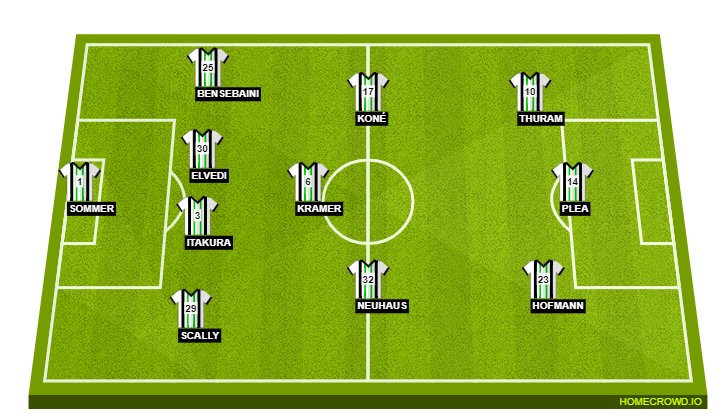 The 30-year-old Senegal international has been in impeccable form since his move from Liverpool, and he has managed to score four goals in his last four competitive appearances for Bayern Munich. Mane is certainly the man to watch out for as he will look to exploit Gladbach’s defensive frailties at the weekend.

Bayern Munich have been ominous going forward, and they have smashed 15 goals in three league matches so far. They will be full of momentum heading into this contest, and the likes of Sadio Mane, Serge Gnabry, Thomas Muller and Kingsley Coman will all fancy their chances of getting on the scoresheet here.

The home side will look to avenge their poor performances against Borussia Monchengladbach from last season, and it is difficult to see the visitors pulling off an upset here. Despite the fact that Gladbach have done well against Bayern in their recent meetings, they are likely to fall short against a spirited Julian Nagelsmann side this weekend.