The 2022/23 Premier League season is finally upon us, and the sprint until the 2022 FIFA World Cup begins on Friday with the game between Crystal Palace and Arsenal. And the Gunners’ north London rival Tottenham Hotspur will kick-start their campaign at home against Southampton on Saturday afternoon.

Tottenham Hotspur’s summer has been nothing short of memorable. Spurs have been on a tear in the ongoing transfer window, bringing in six players, with Destiny Udogie on the verge of becoming their seventh signing. But results in pre-season were not ideal, as they failed to win two games while winning two others.

Southampton’s pre-season results somewhat mirrored those of Tottenham’s, with the Saints losing their final game 2-1 to Villarreal. But Ralph Hasenhuttl will be excited for the 2022/23 campaign after a solid summer transfer window that has seen them bring in six players, thus bolstering his squad considerably.

The corresponding fixture last season saw Southampton twice come from a goal down to beat Tottenham 2-3 at the Tottenham Hotspur Stadium, with Che Adams scoring the late winner. Ahead of the latest meeting between the two sides, The Hard Tackle takes a closer look at the encounter.

🎙 “We want to try and start in the best possible way”

Antonio Conte has a few pressing roster issues hampering his preparations ahead of the visit of Southampton. On Saturday, the Tottenham Hotspur manager will be bereft of the services of four first-team players due to injuries or suspension.

The major absentee for Tottenham is Richarlison, who will miss the match due to a suspension. In addition, Yves Bissouma (thigh) and Oliver Skipp (foot) are dealing with their respective fitness issues, with the former having to wait another week to make his full debut for Tottenham.

The Tottenham starting eleven should bear a familiar look to the 2021/22 season, with Hugo Lloris starting ahead of Fraser Forster between the sticks. Spurs will line up in a 3-4-3 formation in front of the French goalkeeper, with Cristian Romero, Eric Dier and Ben Davies forming the central defensive unit.

Conte suggested in his pre-match press conference that Ivan Perisic is not in the right shape yet to start a game for Tottenham, with Ryan Sessegnon thus picking himself as the left wing-back. Matt Doherty should get the nod ahead of Emerson Royal on the opposite flank, with Conte likely to ease Djed Spence into the thick of the action.

The offensive unit picks itself, with Harry Kane spearheading the Tottenham attack. Son Heung-min and Dejan Kulusevksi will be the two wide attackers, with Lucas Moura being the backup option for Conte to fall back on late in the game. 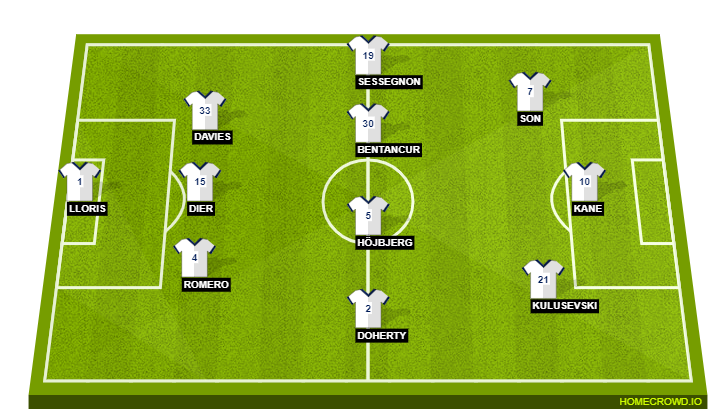 Unlike his counterpart in the Tottenham dugout, Ralph Hasenhuttl does not have any major fitness issues to contend with ahead of the trip to the Tottenham Hotspur Stadium. The Southampton boss will be without three first-team players on Saturday.

Valentino Livramento is a long-term absentee for Southampton, with the young full-back recovering from a knee injury. In addition, Nathan Tella (knee) and Theo Walcott (match fitness) miss out for the Saints against Tottenham.

Gavin Bazunu is in line to make his full debut for Southampton on Saturday, with the former Manchester City goalkeeper likely to get the nod ahead of Alex McCarthy. Kyle Walker-Peters, who has emerged on the radars of several English bigwigs this summer, picks himself as the right-back, with Romain Perraud starting on the left flank.

Jan Bednarek and Mohammed Salisu should pair up at the heart of the Southampton defence, with Oriol Romeu and captain James Ward-Prowse providing cover to the defensive unit. Mohamed Elyounoussi and Stuart Armstrong will be the wide midfielders, with the duo having dual responsibilities in the middle of the park.

Meanwhile, Ward-Prowse will pose the greatest threat for Southampton against Tottenham with his set-piece deliveries. Che Adams should lead the line for the Saints at the Tottenham Hotspur Stadium, with Joe Aribo playing just behind the star striker. 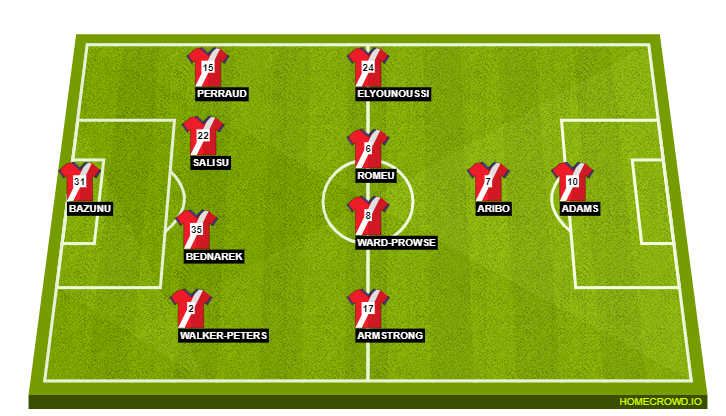 A lot can change in a year, and Harry Kane embodies that thought process. The England captain was unsettled at the Tottenham Hotspur Stadium, this time last year, after failing to secure a move to Manchester City. But Kane is relishing playing under Antonio Conte and is now a happy camper for Tottenham.

The experienced striker does not have a particularly pleasing record in August, and he will be eager to improve that with a blistering start to the season. Kane will take heart from having a brilliant tally against Southampton, with only Alan Shearer (14) and Andrew Cole (11) scoring more or as many Premier League goals versus the Saints as Kane (11). Another goal, and he will only have Shearer – a familiar benchmark – to beat.

Southampton should make things difficult for Tottenham Hotspur, considering the hosts did not look particularly sharp in their pre-season campaign. But neither did the Saints, who will have the unenviable task of keeping Harry Kane, Son Heung-min and Dejan Kulusevski quiet on Saturday.

However, with Spurs not entirely settled at the back, Southampton will have a decent chance of troubling Hugo Lloris. That said, Tottenham should cruise to a 3-1 win once they hit their stride, with Harry Kane likely to be the match-winner with a healthy contribution to get his bid to win the Golden Boot race underway.