Germany will hope to continue their unbeaten run under Hansi Flick when they take on Hungary at the Puskas Arena on Saturday.

The international break continues this weekend with Matchday 3 of the 2022/23 UEFA Nations League. Group 3 in League A is evenly poised after the first couple of rounds of fixtures, justifying the billing of being the group of death. And Hungary will hope to produce another giant-killing act when they play hosts to Germany at the Puskas Arena on Saturday night.

Hungary began their UEFA Nations League campaign with a surprising 1-0 win over England, thanks to Dominik Szoboszlai’s penalty. But the Magyarok could not build more momentum on Matchday 2, as Italy handed them a 2-1 defeat, with the result leaving them second in Group 3.

Germany’s form in the ongoing international break has been anything but inspiring, with Die Mannschaft playing two stalemates in the opening two rounds of fixtures. Hansi Flick’s men came from a goal down to hold Italy to a 1-1 draw before squandering a one-goal lead to enable England to restrict them to a similar scoreline. That result has left Germany a point behind Hungary in third.

Germany and Hungary clashed in the group stage of UEFA Euro 2020 last year, with Die Mannschaft twice coming from a goal down to hold the Magyarok to a 2-2 draw. Ahead of the latest meeting between the two sides, The Hard Tackle takes a closer look at the encounter.

Marco Rossi has been fortunate to see his squad remain healthy in the first ten days of the international break. The Hungary head coach will have all his resources at his disposal against Germany on Saturday.

Rossi will line his side up in a 3-4-2-1 formation, as has been the case, more often than not, lately. Peter Gulacsi, a household name for avid watchers of German league football, will have the unenviable task of keeping Germany’s attackers at bay on Saturday.

The two central midfielders will aim to keep a lid on the outputs of Joshua Kimmich and Ilkay Gundogan, who will likely sit in the middle of the park for Germany. Attila Fiola and Zsolt Nagy should be the two wing-backs, with the duo tasked with providing the width in the final third.

Adam Szalai will spearhead Hungary’s attack against Germany on Saturday. The Hungary captain will need to overpower the German defenders to bring the two creative attackers behind him – Roland Sallai and Dominik Szoboszlai – into the game. 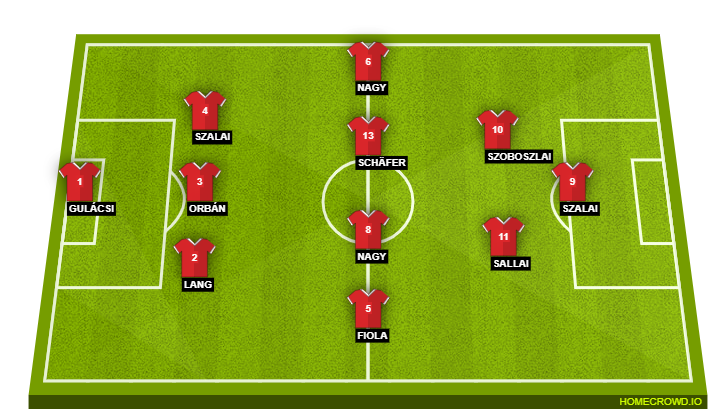 Hansi Flick has been handed a major blow on the team news front ahead of the trip to the Puskas Arena. On Saturday, the Germany head coach will be bereft of the services of two players due to fitness issues.

Serge Gnabry is doubtful due to a calf strain, and Flick may not risk the 26-year-old. But while Gnabry will be in contention to feature in the remaining games this month, Marco Reus has seen his international break end early due to a thigh injury that has forced him to pull out of Germany’s squad.

🎙️ Hansi Flick gives a squad update: "@SergeGnabry is a doubt – he has calf issues. We won't make a decision for the time being. @Manuel_Neuer will play; there won't be a change between the sticks."#DieMannschaft #HUNGER pic.twitter.com/fpvuReXnpc

Flick experimented with a new system against England, featuring a back-three. But the Germany head coach should revert to his preferred 4-2-3-1 formation versus Hungary, with Manuel Neuer confirmed as a starter between the sticks for Die Mannschaft.

The formation change will likely result in Thilo Kehrer returning to the side as the right-back, with David Raum reprising a traditional full-back role against Hungary. Niklas Sule and Antonio Rudiger should pair up at the heart of Germany’s defence, with Nico Schlotterbeck dropping to the bench after his error proved costly versus England.

Up ahead in midfield, the indomitable Joshua Kimmich will retain his spot in the team, with Ilkay Gundogan likely to pair up with him in the double-pivot. Thomas Muller will be the third midfielder for Germany, with the veteran playmaker reprising the no. 10 role.

The shuffles will prompt Flick to recall a couple of attackers to the side, with Leroy Sane and Timo Werner getting the chance to impress. Werner will spearhead the attack for Germany against Hungary, with Sane and Kai Havertz being the two wide men, although the duo will often veer infield on Saturday. 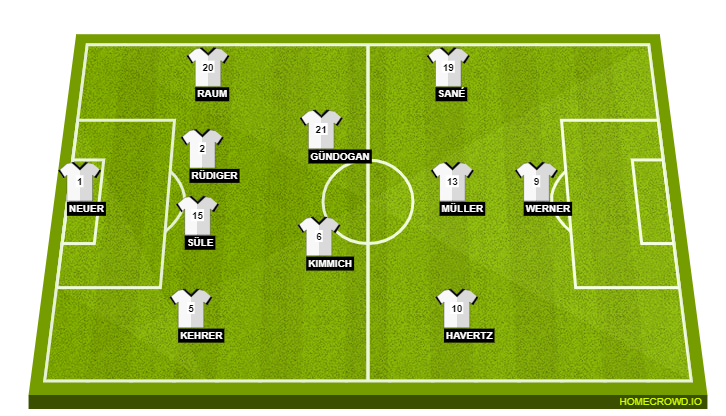 Timo Werner has endured a terrible fall from grace since ending his stint in the Bundesliga by joining Chelsea two years ago. The German international was supposed to be the Blues’ solution in the attacking unit but has instead proven to be a dud apart from a few instances of good displays.

Werner’s struggles at the club level have also trickled over to the international arena, with his stock falling considerably in Germany’s national team. But he should get a chance to impress against Hungary, and he will hope to grab his opportunity with both arms to take a step towards stamping his ticket for the 2022 FIFA World Cup.

Time and again, Hungary have shown that they are no pushovers, and certainly not when they go head-to-head with the best teams. The Magyarok handed England a 1-0 defeat and gave Italy a run for their money despite suffering a loss. And with Germany’s form faltering lately, Hungary will feel they have another chance to cause an upset.

Germany will be desperate to bounce back to winning ways after playing three successive 1-1 draws. A formation change should prompt an improvement in form, with Timo Werner and Leroy Sane having a point to prove. And Germany should claim all three points in a closely-contested affair, with Hungary scoring a goal to take the game till the final moments.