England will hope to start their UEFA Nations League campaign strongly when they take on Hungary at the Puskas Arena on Saturday.

The international break is underway, and the national teams will participate in more than their usual quota of two games this month. England will begin their campaign in the third edition of the UEFA Nations League when they lock horns with Hungary at the Puskas Arena on Saturday night.

Hungary’s form has tumbled in the last twelve months, with the Magyarok winning just four of their last 13 games dating back to June 8. Marco Rossi’s men have won and lost one game each this year, with both the matches ending 1-0, and they will not play at the 2022 FIFA World Cup either.

England and Hungary were in the same group in the European section of the 2022 FIFA World Cup Qualifiers, with the former clinching the top spot without much fuss after an unbeaten campaign. The Three Lions have been solid since their defeat in the UEFA Euro 2020 final, winning seven of their nine outings (D2).

England came from a goal down to hold Hungary to a 1-1 draw in the most recent match-up between the nations, with John Stones and Roland Sallai on target. Ahead of the latest meeting between the two sides, The Hard Tackle takes a closer look at the encounter.

Marco Rossi has barely made any changes to the squad he had picked in the previous international break in March. Kevin Varga is the only player to miss out from that group, with the Hungary head coach picking four uncapped players for the latest round of fixtures.

The two senior figures in the squad will feature on either end of the pitch, with captain Adam Szalai spearheading Hungary’s attack and Peter Gulacsi starting between the sticks. Hungary will line up in a 3-4-2-1 formation in front of Gulacsi, with Attila Szalai crucially fit to start.

The 24-year-old will start in the central defensive unit, with Willi Orban and Adam Lang starting alongside him in the back-three. Loic Nego and Zsolt Nagy will be the two wing-backs, with the duo providing the width in the final third.

Andras Schafer and Adam Nagy will be the two central midfielders, with the duo looking to keep things tight in the middle of the park. As iterated, Adam Szalai will spearhead the attack for Hungary, with Dominik Szoboszlai and Roland Sallai playing behind the 34-year-old as the creative personnel. 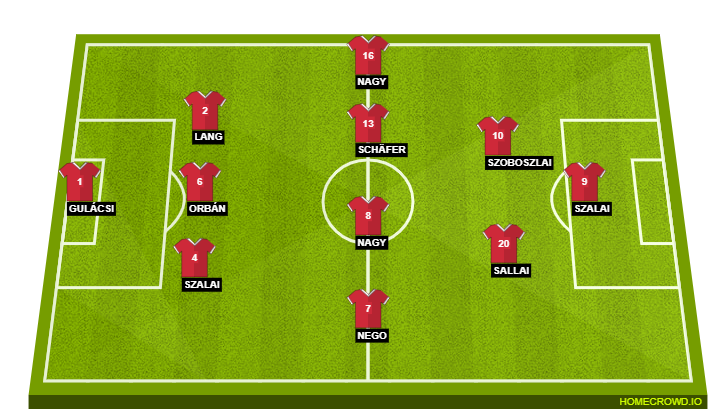 Gareth Southgate has made sweeping changes to the squad he had picked in the previous international break in March. The most notable absentees are Jordan Henderson, Luke Shaw and Tyrone Mings. In addition, the England head coach will be without two players he had picked for the latest set of matches.

Phil Foden has tested positive for COVID-19 ahead of the trip to Hungary and will play no part in the game on Saturday. But Gareth Southgate is hoping to have the 22-year-old at his disposal after the match against Germany next week. Meanwhile, Ben White misses out for England due to an injury and will continue his rehabilitation at Arsenal.

Gareth Southgate provided an update on @PhilFoden in his press conference.

"Phil Foden unfortunately tested positive for COVID, so he's had to leave. Hopefully he'll be able to meet up when we get back from Germany." pic.twitter.com/LC9ckSodhY

With Shaw injured and Ben Chilwell only just returning from a long-term knee injury, Southgate has interestingly chosen not to pick a left-back in his squad. So Kieran Trippier could start on the left side of England’s defence, with Reece James expected to start ahead of Kyle Walker on the opposite flank.

Fikayo Tomori will likely get the chance to impress at the heart of England’s defence, with Harry Maguire his central defensive partner. And there is no looking past Jordan Pickford in the back four, with the Everton goalkeeper the first-choice stopper for England.

Up ahead in midfield, Jude Bellingham should start ahead of Kalvin Phillips, keeping in mind the latter’s fitness issues in the 2021/22 season. Declan Rice will start alongside Bellingham in the double-pivot, with Phillips, James Ward-Prowse and Conor Gallagher the backup options.

Mason Mount will reprise the no. 10 role, sitting behind central striker and England captain Harry Kane, who will have the chance to notch up a half-century of goals for the Three Lions. In Foden’s absence, Jarrod Bowen could get the opportunity to make his England debut, with Raheem Sterling an automatic pick on the left flank. 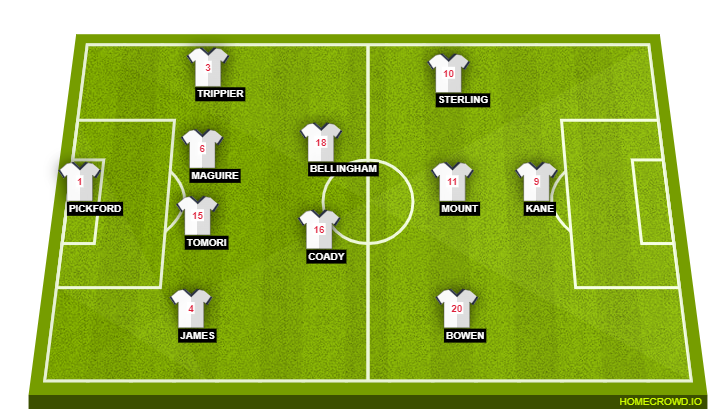 The summer transfer window is fast approaching, and one player whose future remains up in the air is Raheem Sterling. The English forward has blown hot and cold in the last couple of seasons and could leave Manchester City this summer, with his contract set to run out next year.

But Sterling is a different beast altogether in the international arena, and he is one of the most pivotal players for Gareth Southgate. After playing a leading role in taking England to the UEFA Euro 2020 final, Sterling will now look to regain rhythm in the build-up to the 2022 FIFA World Cup, starting with England’s UEFA Nations League campaign.

England reached the latter stages of the inaugural edition of the UEFA Nations League, and they will hope to go all the way in the third iteration. But Hungary will provide stiff competition to the Three Lions despite their indifferent form in the last twelve months.

But despite putting up strong resistance at the Puskas Arena, Hungary might not be strong enough to get something out of the game. And England will gradually put the game to bed, clinching a 2-0 win over Marco Rossi’s men to start their UEFA Nations League campaign with a bang.