Leeds United will be desperate to bounce back to winning ways when they welcome Brighton & Hove Albion to Elland Road on Sunday.

The 2021/22 Premier League season will end in a week, and the final table is starting to take its shape. The relegation battle remains as gilt-edged as ever, with three teams fighting to evade the 18th spot in the standings, currently occupied by Leeds United. And the Whites will be in action on Sunday afternoon when they play hosts to Brighton & Hove Albion at Elland Road.

Leeds United entered 2021/22 on the back of a memorable first season back in the Premier League. But the Whites have endured a forgettable campaign thus far, struggling to get out of the relegation zone all term. Their floundering form cost Marcelo Bielsa his job, with Jesse Marsch replacing him. But that has not helped Leeds’ cause much, as they are languishing in the 18th spot after a four-game winless run.

On the other hand, Brighton & Hove Albion are battling to clinch their first top-half finish in the Premier League. The Seagulls will likely need to win both their remaining games to clinch a spot in the top ten. Graham Potter’s men have lost just one of their last seven Premier League games, with their most recent clash ending in a 4-0 trouncing of Manchester United.

The reverse fixture ended in a goalless draw, with neither Leeds nor Brighton managing to find the back of the net despite mustering four shots on target each. Ahead of the latest meeting between the two sides, The Hard Tackle takes a closer look at the encounter.

💬 𝗝𝗲𝘀𝘀𝗲 𝗼𝗻 𝘁𝗲𝗮𝗺 𝗻𝗲𝘄𝘀: “Jack should be in training tomorrow and ready for Sunday, Rapha is fine and ready to go. Patrick is a little too early to tell, we’ll evaluate that over the next few days.” pic.twitter.com/PZzQw8XCgh

Jesse Marsch has a new roster issue hampering his preparations ahead of the visit of Brighton & Hove Albion. On Sunday, the Leeds United manager will be bereft of the services of six first-team players due to injuries or suspension.

But there is some good news, as Raphinha and Jack Harrison are fit and available after recovering from their respective minor fitness issues. Patrick Bamford could also be in contention to feature on Sunday against Brighton, with Marsch likely to take a late call on his availability.

Bamford is unlikely to start against Brighton, with Joe Gelhardt expected to replace James in the starting lineup. Rodrigo Moreno will play behind Gelhardt, with Raphinha and Harrison starting as the two wide men for Leeds.

Mateusz Klich and Kalvin Phillips will form a double-pivot in midfield, with the duo looking to contain Brighton runners like Pascal Gross and Leandro Trossard. But the two central midfielders will need support from the four defenders, who could have a tough time curbing the threat of Danny Welbeck.

Robin Koch will start as a makeshift right-back in Ayling and Dallas’ absence, with Junior Firpo returning on the left flank. Diego Llorente and Liam Cooper will pair up at the heart of the Leeds defence, with Illan Meslier taking his place between the sticks. 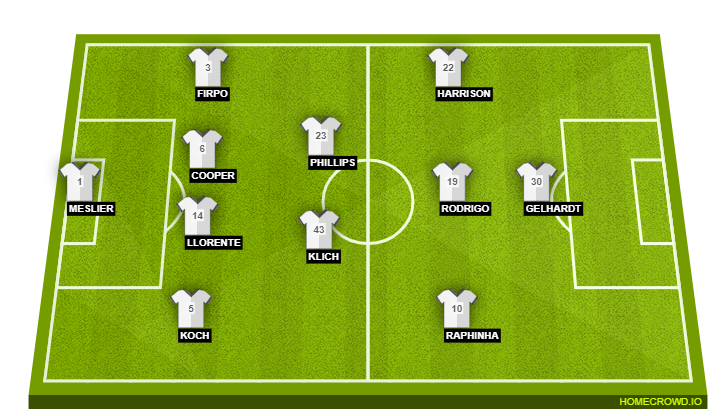 Unlike his counterpart in the Leeds United dugout, Graham Potter does not have any new concerns to deal with ahead of the trip to Elland Road. The Brighton & Hove Albion manager will be without three first-team players on Sunday.

Jeremy Sarmiento (hamstring), Jakub Moder (knee) and Enock Mwepu (hamstring) remain on the sidelines. But Sarmiento and Mwepu could have the chance to return for the season’s final game next week.

"Enock did a little bit today but Sunday will come too soon.

"Jeremy is making progress but I think we will have the same group as we had against Manchester United." #BHAFC pic.twitter.com/U3rcR1XZWf

Pascal Gross has stepped up superbly in Mwepu’s absence, and the German midfielder will line up alongside Moises Caicedo and Yves Bissouma in the middle of the park. Solly March and Leandro Trossard will be the two wing-backs for Brighton, with the duo providing width higher up the pitch.

Trossard will also see Marc Cucurella overlap off him in the final third, even though the Spaniard will start as the third centre-back in a three-man defensive unit also consisting of Lewis Dunk and Joel Veltman. Robert Sanchez will be the man in the Brighton goal against Leeds United.

At the other end of the pitch, Danny Welbeck picks himself as the central striker for Brighton, with Alexis Mac Allister having a free role in the final third. 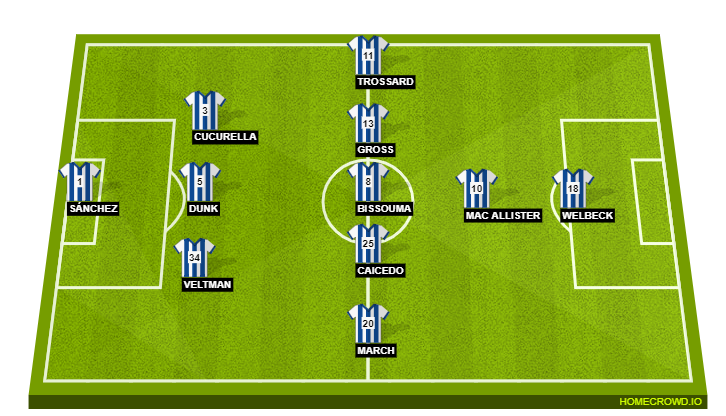 Leeds United’s season is spiralling out of control, and there is only one player who can bring some sense of stability to the pitch. Raphinha has been, by far, the standout performer for Leeds this season, but his form has dwindled in the last few weeks.

The Brazilian international needs to retrace his steps to the early days of the campaign when he was flying in a stumbling Leeds side. Raphinha will have to perform in a similar vein to help Leeds avoid the drop to the EFL Championship and retain their Premier League status, starting against Brighton & Hove Albion on Sunday.

Leeds United will take the game to Brighton & Hove Albion on Sunday, and there are no two ways about it. But the Whites’ defence bears a hollow look, allowing Brighton to be in contention to score throughout the ninety minutes, especially with the full-backs offering little to no protection.

Raphinha will carry a threat in the final third, but the defensive vulnerabilities will render his output irrelevant while enabling Brighton to claim another convincing win. The Hard Tackle predicts a 3-1 victory for the Seagulls, with Leeds edging closer to the drop.