Everton will look to take a step closer to securing their Premier League status when they welcome Brentford to Goodison Park on Sunday.

Just two more gameweeks remain for the 2021/22 Premier League season to end, and battles are brewing across the table. Everton and Brentford will lock horns at Goodison Park on Sunday, with the hosts aiming to avoid relegation, while the visitors will look to clinch a top-half finish.

Everton’s 2021/22 campaign started amid protests from the fans for the appointment of Rafael Benitez, a former Liverpool manager. While the Spaniard initially won over the tough Goodison Park crowd, he lost his job after a horrendous run midway through the season. Frank Lampard, his replacement, took some time to steady the ship, even though safety looked unlikely at one point.

But a run of one defeat in six games has pulled the Merseyside outfit out of the drop zone, two points clear of 18th-placed Leeds United. On the other hand, Brentford only briefly flirted with the prospect of relegation and have mostly enjoyed a stable 2021/22 campaign, their first outing in the Premier League.

Thomas Frank’s group of hardy players has sprung a surprise on many Premier League bigwigs, starting with the opening day win over Arsenal. And the Bees are in contention to finish in the top ten, although that is a tough prospect, with Leicester City and Crystal Palace having a game each in hand.

The reverse fixture ended in a 1-0 win for Brentford, with Ivan Toney scoring a penalty in the first half. Meanwhile, Everton beat the Bees 4-1 in the FA Cup clash between the two sides in February. Ahead of the latest meeting between the two teams, The Hard Tackle takes a closer look at the encounter.

Frank Lampard has been handed a boost on the team news front ahead of the visit of Brentford. On Sunday, the Everton manager will be bereft of the services of four first-team players due to various fitness issues.

Fabian Delph will miss #EVEBRE with a muscle injury while there is a chance Ben Godrey could return this weekend.

The good news is that Ben Godfrey and Donny van de Beek could be in contention to feature versus Brentford after stepping up their recovery. The duo’s return will leave Nathan Patterson (ankle), Yerry Mina (calf), Fabian Delph (muscle injury) and Andros Townsend (knee) on the sidelines.

Godfrey and van de Beek might not feature from the get-go, meaning Seamus Coleman will play in the central defensive unit again, while Allan and Abdoulaye Doucoure will start as the central midfield pairing for Everton.

Coleman will join Michael Keane and Mason Holgate in the back three, with Alex Iwobi and Vitalii Mykolenko being the two wing-backs. Jordan Pickford is an automatic pick between the sticks, with Allan and Doucoure starting in the middle of the park, where they will hope to keep a lid on Christian Eriksen’s output.

As for the offensive unit, Dominic Calvert-Lewin should spearhead the Everton attack against Brentford, with Anthony Gordon and Richarlison being the two wide men. Demarai Gray was impressive against Watford and will be an option on the bench. 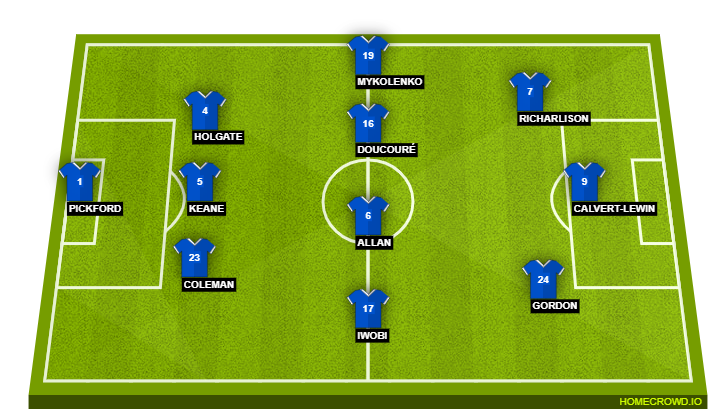 Like his counterpart in the Everton dugout, Thomas Frank will have a player back at his disposal ahead of the trip to Goodison Park. The Brentford manager will be without four first-team players on Sunday.

The good news is that Sergi Canos is fit and available after recovering from a thigh injury. But Ethan Pinnock (thigh), Saman Ghoddos (ankle), Zanka (hip) and Frank Onyeka (ankle) remain on the sidelines and will play no part against Everton.

"Ethan Pinnock will not be ready. Saman Ghoddos is also out but Frank Onyeka trained with the team today; it’s a bit too early to be involved"#BrentfordFC #EVEBRE pic.twitter.com/ZeQO2bU2Dm

Frank should persist with the 4-3-3 formation after a solid performance against Southampton last weekend. That means Kristoffer Ajer will continue in a hybrid role of a right-back and an auxiliary centre-back, creating a lopsided unit that will give Rico Henry the license to charge forward.

Pontus Jansson and Mads Bech Sorensen will pair up at the heart of the Brentford defence, with David Raya taking his place between the sticks. Up ahead in midfield, Christian Norgaard and Mathias Jensen will reprise the defensive roles, with Christian Eriksen being the creator-in-chief for Brentford.

Ivan Toney will spearhead the Brentford attack against Everton, with Yoane Wissa and Bryan Mbuemo being the two wide men. Toney will often drop deep to pull the Everton defenders out of position, creating space for Mbuemo and Wissa to veer infield. 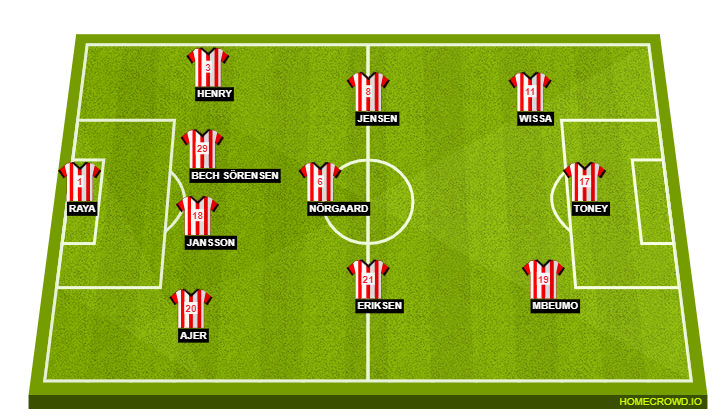 Everton’s form has been on an upswing in the last few weeks, but their attacking players still have a lot of room for improvement. Of those, Anthony Gordon has been the most impressive performer this season, even though tangible returns have not backed his displays.

But it is high time Gordon started to produce the goods with an improved tally to take the next step in his evolution. With Richarlison and Dominic Calvert-Lewin heavily linked with possible summer departures, Gordon will need to become Everton’s attacking leader, starting with the crucial encounter with Brentford.

The match features two teams in top form at the moment, meaning Everton and Brentford could indulge in a keenly-contested affair. The Toffees will bring the game to Brentford, who will carry a significant threat on the break, with Ivan Toney being the danger man.

In the end, though, there might not be too much to separate Everton and Brentford, which is why The Hard Tackle predicts a 2-2 draw, a result that will take the Merseyside outfit a step closer to retaining their Premier League status.