Manchester City will look to move a step closer to successfully defending their Premier League crown when they take on Wolves at the Molineux on Wednesday.

The 2021/22 Premier League season is on its last legs, with the title race going down to the wire. The reigning champions Manchester City will be in action on Wednesday night when they lock horns with Wolverhampton Wanderers at the Molineux, looking to take another step towards keeping the crown firmly on their head.

Wolverhampton Wanderers have seen their campaign peter out after once being in contention for a top-six finish. But unless they win their remaining three games, Wolves will not finish sixth, and ending seventh on the table is their best hope for European football next season. Bruno Lage’s men will be buoyed by their late comeback against Chelsea, with the Blues dropping two points in a 2-2 draw.

On the other hand, Manchester City’s form in the business end of the season once again shows them to be the epitome of consistency in the clutch period. The reigning Premier League champions last faced a defeat in February and are currently on a four-game unbeaten run. Their most recent win was a 5-0 thrashing of an in-form Newcastle United, with the result taking them three points clear of Liverpool.

The reverse fixture ended in a 1-0 win for Manchester City, with Raheem Sterling scoring a penalty in the second half, while Wolves striker Raul Jimenez was sent off on the stroke of half-time. Ahead of the latest meeting between the two sides, The Hard Tackle takes a closer look at the encounter.

Bruno Lage does not have any new injury concerns hampering his preparations ahead of the visit of Manchester City. On Wednesday, the Wolverhampton Wanderers manager will be bereft of the services of three first-team players.

Max Kilman (ankle), Nelson Semedo (hamstring) and Daniel Podence (toe) remain on the sidelines due to their respective fitness issues. But while Kilman and Semedo are done for the season, Podence could be in contention to feature in Wolves’ last two games, although the Manchester City clash has come too soon for him.

While the possibility of Lage’s presence in the Wolves dugout remains unclear, the Portuguese tactician will likely shift to the 3-5-2 formation to contain the threat of the Manchester City midfielders. The decision will lead to a recall for Leander Dendoncker.

The Belgian international will line up alongside Joao Moutinho and Ruben Neves in the middle of the park. Jonny Otto and Rayan Ait-Nouri will continue to be the two wing-backs, with the duo carrying a significant threat on their forays down the flanks.

Francisco Trincao will have done enough to earn a start after initiating Wolves’ comeback against Chelsea this past weekend. The Portuguese forward will link up with Raul Jimenez in the strike partnership, with Pedro Neto, Hwang hee-Chan, Fabio Silva and Chiquinho options off the bench.

Jose Sa picks himself between the sticks, with Willy Boly, Conor Coady and Romain Saiss continuing as the central defensive partnership. The trio will need to be more disciplined than last week, as Manchester City will pounce on the errors more efficiently. 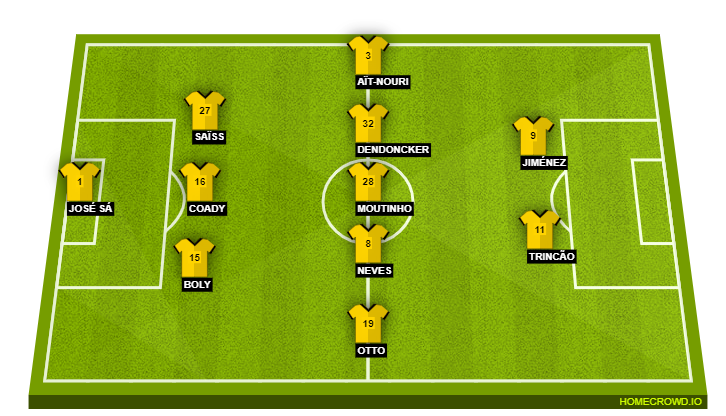 News of Manchester City reaching an agreement to sign Erling Haaland has already filtered in. But the Borussia Dortmund striker will only be at Pep Guardiola’s disposal next season. As for the current Manchester City squad, Guardiola will be without three first-team players on Wednesday.

John Stones (hamstring), Kyle Walker (ankle), and Ruben Dias (hamstring) are all out for the rest of the season and will miss Manchester City’s remaining three games. The trio’s absence will leave Guardiola short of quality options at the back, especially with Nathan Ake unlikely to be declared match fit to take on Wolves.

Fernandinho will thus start at the heart of the Manchester City defence alongside Aymeric Laporte, with Oleksandr Zinchenko and Joao Cancelo being automatic picks as the two full-backs. Ederson Moraes is a certainty to start in the Manchester City goal.

Up ahead in midfield, Bernardo Silva should return at Ilkay Gundogan’s expense, lining up alongside Rodri and Kevin De Bruyne in the middle of the park. Riyad Mahrez should also be back in the side, starting on the right wing, with Raheem Sterling moving to the left flank. Finally, the in-form Gabriel Jesus will spearhead the Manchester City attack against Wolves. 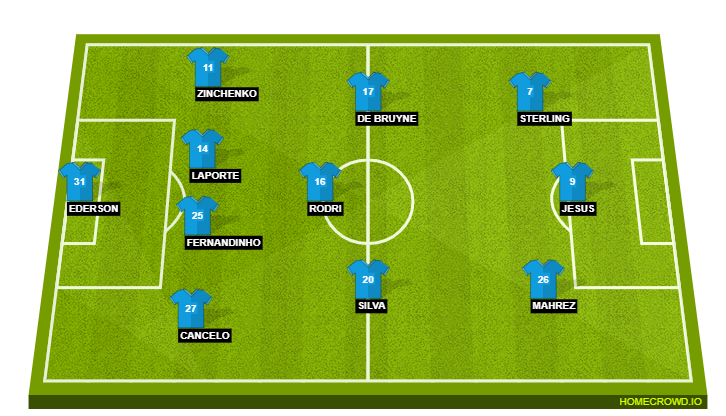 With Manchester City approaching the end of the season with an injury crisis in the defensive unit, the onus will be on Aymeric Laporte to keep things tight at the back. The Spanish international will need to ensure the absence of Ruben Dias and John Stones is not felt one bit from now till the end of the season.

With only three games left for Manchester City’s Premier League campaign to end, Laporte will be determined to do his part to ensure the Citizens successfully defend their crown. A Wolverhampton Wanderers side playing on the counter-attack will pose a significant threat to that bid this week.

Wolverhampton Wanderers will not make things easy for Manchester City, much like the reverse fixture. The hosts will be eager to ensure a player does not see red this time around to heap the pressure on the Premier League champions in a sustained manner.

But Manchester City’s tremendous form will continue unhindered, with Raheem Sterling and Gabriel Jesus continuing their strong form to deliver all three points. The Hard Tackle predicts a hard-fought contest for Manchester City, which will end in a 2-0 win for Pep Guardiola’s men.