Bayern Munich will look to continue dominating the Bundesliga despite clinching the title when they take on 1. FSV Mainz 05 on Saturday.

The Bundesliga season is done and dusted as far as the title race is concerned. But there is still a lot to play for in the top-four battle and the relegation dogfight. However, Bayern Munich will play a dead rubber on Saturday when they lock horns with 1. FSV Mainz 05 at the MEWA Arena.

1. FSV Mainz 05’s season has petered out in the last few months, meaning they are staring at a mid-table finish for the 2021/22 season. The 05ers once looked to be in contention to clinch European qualification. But a run of five games without a win in April has dropped them down to tenth, with 14th-placed Augsburg just four points behind them.

On the other hand, 2021/22 has been the tenth successive season that will end with Bayern Munich winning the Bundesliga title. The Bavarian giants faced a few scares due to some uncharacteristic performances midway through the campaign. But last weekend’s big win over Borussia Dortmund helped Bayern Munich create a 12-point buffer over their arch-rivals, thereby sealing their triumph.

Bayern Munich came from a goal down to beat Mainz 2-1 in the reverse fixture, with Kingsley Coman and Jamal Musiala delivering the goods. Ahead of the latest meeting between the two sides, The Hard Tackle takes a closer look at the encounter.

💬 Bo Svensson: "St. Juste has been involved in a few of the sessions. He has a long period of rehab behind him. It's great that he's with us again. He won't be available for Bayern, though."

Bo Svensson has a new roster issue hampering his preparations ahead of the visit of Bayern Munich. On Saturday, the 1. FSV Mainz 05 manager will be bereft of the services of four first-team players due to injuries and suspension.

Niklas Tauer will serve a one-match ban after being sent off in last week’s crushing defeat to VfL Wolfsburg. Other than Taer, Jeremiah St. Juste, Jae-Sung Lee and Delano Burgzorg remain on the sidelines and will play no part against Bayern Munich.

In Tauer’s absence, Alexander Hack will deputise to form the back three along with Stefan Bell and captain Moussa Niakhate. Mainz will line up in their usual 3-5-2 formation, aiming to keep a lid on Bayern Munich’s offensive output throughout the game.

Silvan Widmer and Aaron Martin will be the two wing-backs for Mainz, with the duo providing the width in the final third. Anton Stach, Leandro Barreiro and Dominik Kohr will form a defensively resolute central midfield trifecta, with Stach and Kohr also in charge of providing the forward thrust from the middle of the park.

Karim Onisiwo and Jonathan Burkardt will form the strike partnership for Mainz, with the duo possibly feeding off scraps on Saturday. But Bayern Munich’s defensive frailties will keep the two Mainz strikers in the hunt to take something from the game. 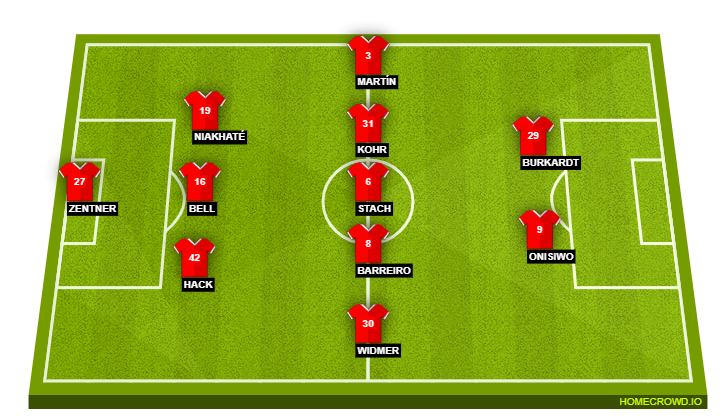 Like his counterpart in the 1. FSV Mainz 05 dugout, Julian Nagelsmann has new squad issues to deal with ahead of the trip to the MEWA Arena. The Bayern Munich manager will be without five first-team players on Saturday.

Dayot Upamecano and Thomas Muller will miss out due to their respective bouts with an illness. They have joined Bouna Sarr (knee), Corentin Tolisso (hamstring) and Kingsley Coman (ankle) on the sidelines.

In Upamecano’s absence, Tanguy Nianzou will likely pair up with Lucas Hernandez at the heart of the Bayern Munich defence. Benjamin Pavard and Alphonso Davies will be the two full-backs against Mainz, with Manuel Neuer taking his usual spot between the sticks.

Up ahead in midfield, Joshua Kimmich and Leon Goretzka will form the double-pivot, with the duo looking to assert Bayern Munich’s control over Mainz throughout the proceedings. Jamal Musiala will likely be the third Bayern Munich midfield in Muller’s absence.

Musiala will have a free role higher up the pitch and will look to carve out the openings in the final third. Robert Lewandowski will spearhead the Bayern Munich attack against Mainz, with Serge Gnabry and Leroy Sane being the two wide men. 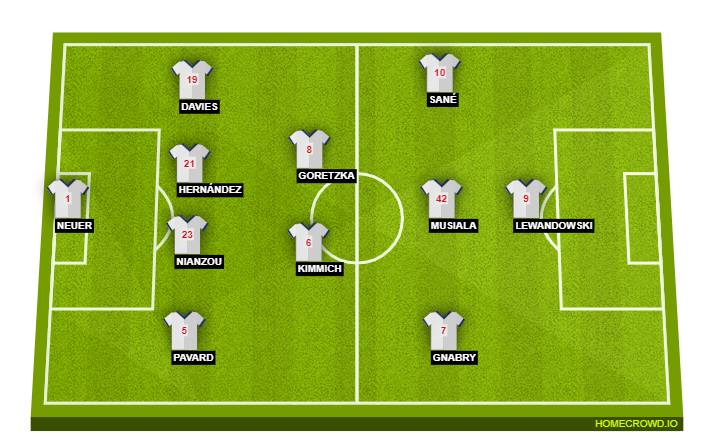 With Bayern Munich not having anything to play for in the coming weeks, the players can start playing for themselves and their records. Robert Lewandowski will finish another Bundesliga season by finishing on top of the scoring charts. But this time around, he might not be breaking the record he set last season.

Nonetheless, with speculation surrounding him growing like wildfire, Lewandowski will be eager to let his game do the talking for him. And there is no better way for the Pole to express himself than by scoring bundles of goals, which he will aim to do against 1. FSV Mainz 05 on Saturday.

Saturday’s match will feature two teams that do not have much to play for in the remaining weeks of their respective Bundesliga campaigns. But Mainz will be determined to clinch a top-half finish, meaning they will give it their all to cause an upset at the MEWA Arena.

The hosts have scored the first goal in their last three Bundesliga matches against Bayern Munich, and Saturday might not be any different. But with Robert Lewandowski in red-hot form, the newly-crowned 2021/22 Bundesliga champions will claw their way back into the contest before sealing all three points. The Hard Tackle predicts a 3-1 win for Bayern Munich.