Paris Saint-Germain will be hoping to return to winning ways when they take on RC Strasbourg at Stade de la Meinau on Friday.

After securing the Ligue 1 title last weekend, Paris Saint-Germain will be keen on ending their campaign on a positive note by winning all of their remaining four matches of the season.

They will start the journey on Friday night with a trip to Strasbourg. It is quite the dead-rubber affair for Mauricio Pochettino’s men, who have nothing left to play for after securing the title while being knocked out of both the UEFA Champions League and the Coupe de France earlier this year.

For Strasbourg, though, it is a must-win encounter as the hosts look to maintain their push for the European places. Currently standing sixth in the Ligue 1 table, the club from Alsace have a chance to finish inside the top four and clinch a place in the UEFA Europa League next season, if they can maintain a winning run in May.

With four games left before the season comes to a close, Strasbourg are trailing fourth-placed AS Monaco by just three points. So a win against PSG could go a long way in helping them maintain their push for the European places as we head towards the final phase of the campaign.

Here, at The Hard Tackle, we will run the rule over these two sides ahead of their exciting match-up at Stade de la Meinau this Friday.

RC Strasbourg are set to miss out on the services of a host of players heading into this contest, including Dimitri Lienard, Jean-Eudes Aholou, Nordine Kandil, Abdul Majeed Waris and Ismael Doukoure, although Doukoure might be a possibility for this Friday encounter.

Strasbourg coach Julien Stephan typically favours a three at the back setup with two wing-backs offering width out wide and two forwards pressuring the ball-carrying centre-backs. His side is expected to line up similarly against PSG, although the wing-backs might be handed a more defensive role due to the quality of the opposition.

Attack is by far the strongest asset for Strasbourg, with three of their centre forwards scoring a combined total of 32 league goals this term. Only two in Kevin Gameiro and Ludovic Ajorque could start against PSG, thus forming the first line of press.

In midfield, Jean-Ricner Bellegarde and Sanjin Prcic are two hard-working operators who will look to break up the opposition’s play and offer maximum coverage to their partnering midfielder in Adrien Thomasson.

There should be no changes from the back three or the pendulating back five that started against LOSC Lille, though it will be interesting to see if Stephan opts to offer more freedom to one of the wing-backs in an attempt to exploit the space left behind by the marauding PSG wing-backs. 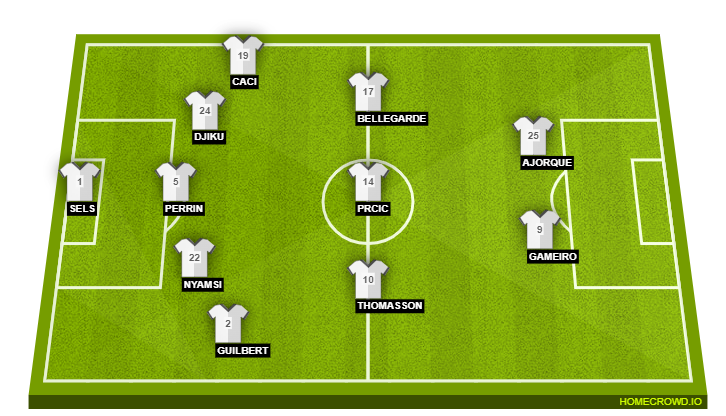 Mauricio Pochettino had hinted at his desire to give young players the opportunity to perform following PSG’s triumph in the league. In any case, the PSG head coach is missing out on several key players due to injuries, including Julian Draxler, Mauro Icardi, Leandro Paredes and Abdou Diallo.

The likes of Xavi Simons, and Edouard Michut are some of the candidates to start against Strasbourg. But given the way the front three of Lionel Messi, Neymar and Kylian Mbappe are performing at the moment, the Argentine could be compelled to make minimal changes in the attack.

In midfield, Idrissa Gueye is facing a suspension, which could pave the way for the young Dina Ebimbe to earn a rare start in midfield, alongside Marco Verratti.

Pochettino usually likes to incorporate three midfielders. But having shifted to a 3-4-3 setup lately, the PSG coach could favour only Ebimbe and Verratti in the middle of the park, with the two wing-backs in Achraf Hakimi and Nuno Mendes completing the second line of press.

Defensively, the combination of Sergio Ramos, Marquinhos and Presnel Kimpembe looked quite promising in their recent outing together. They are likely to continue serving the back three this Friday and protect Keylor Navas in between the sticks. 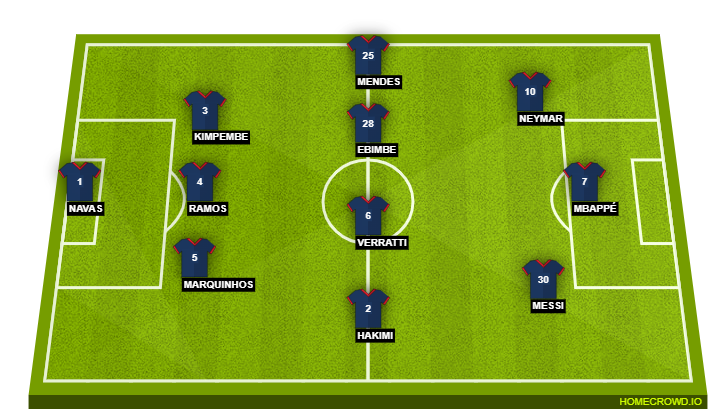 Keylor Navas is hoping to start ahead of Gianluigi Donnarumma yet again. (Photo by Ezequiel Becerra/AFP/Getty Images)

This could be yet another vital game for Keylor Navas. After recovering from a knock, the Costa Rican international has been able to replace Gianluigi Donnarumma in goal. He has produced a couple of excellent performances lately and remains ahead of the Italian in the pecking order.

However, Navas cannot afford to slip up, knowing his performances in these final few matches of the season could go a long way in dictating his future at PSG in the summer.

Navas could be tested up against a Strasbourg attack that boasts the services of three quality strikers that can keep the veteran PSG goalkeeper busy throughout the ninety minutes. A clean sheet could indeed be quite the achievement for the former Real Madrid man this Friday.

Given Strasbourg’s quality in the final third, it won’t be surprising to see the home side causing problems for the PSG backline that looked quite vulnerable against Lens last weekend.

That said, the PSG frontline has performed extraordinarily well in recent weeks and although they were quite wasteful against Lens, we expect them to put on a show once again in this Friday night encounter.

Strasbourg are expected to defend in deep blocks, offering very little space in between for ball-carriers like Lionel Messi and Marco Verratti. But with the wing-backs marauding down the channels, it could be quite difficult for the hosts to control the game and snatch any point here. The Hard Tackle predicts a 3-1 win for PSG.