Liverpool will hope to take a step closer to reaching the UEFA Champions League final when they welcome Villarreal to Anfield on Wednesday.

The UEFA Champions League is reaching its climactic end, with just two stages remaining for the new winner to clinch the coveted crown. Manchester City and Real Madrid will face off in the first of the two semi-finals on Tuesday before Liverpool and Villarreal lock horns in the other clash on Wednesday night.

Liverpool progressed to the UEFA Champions League knockout stages by winning Group B with a perfect record. The Reds then scraped past Inter Milan in the Round of 16 before beating Benfica to reach the semi-finals. Jurgen Klopp’s men have been arguably the most formidable team in Europe in 2022, losing just one of the 26 they have played this year, most recently beating Everton 2-0 in the Merseyside derby.

On the other hand, Villarreal moved past the group stage by finishing second in Group F before embarking on a giant-killing mission, beating Juventus and Bayern Munich to book the date with Liverpool. The Yellow Submarine might not have been as impressive as the hosts, but they are on a five-game unbeaten run, albeit with fading chances of clinching European qualification based on their finishing position in La Liga.

Liverpool progressed to the 2015/16 UEFA Europa League final in the only instance the two sides met, beating Villarreal over two legs of a riveting semi-final battle. Ahead of the latest meeting between the two sides, The Hard Tackle takes a closer look at the encounter.

Jurgen Klopp does not have any new roster issues hampering his preparations ahead of the visit of Villarreal for the UEFA Champions League semi-final first leg. But Roberto Firmino could remain unavailable to represent Liverpool this midweek.

The Brazilian forward is a major doubt due to a foot injury that forced him to miss the Merseyside derby this past weekend. In Firmino’s continued absence, Sadio Mane will retain his spot as the central striker, forming a dynamic frontline along with Mohamed Salah and Luis Diaz, with interchangeability being the name of the game in the final third.

Thiago Alcantara will be the pivotal player for Liverpool, with the Spanish international having the onus to dictate the tempo and assert the Reds’ control on the proceedings. Thiago will line up alongside Jordan Henderson and Fabinho in the middle of the park, with Klopp likely to overlook Naby Keita.

Alisson Becker will take his usual spot between the sticks against Villarreal, with Ibrahima Konate pairing up with Alisson Becker at the heart of the Liverpool defence. Trent Alexander-Arnold and Andrew Robertson will be the two full-backs, with the duo being the chief source of creativity for the hosts. 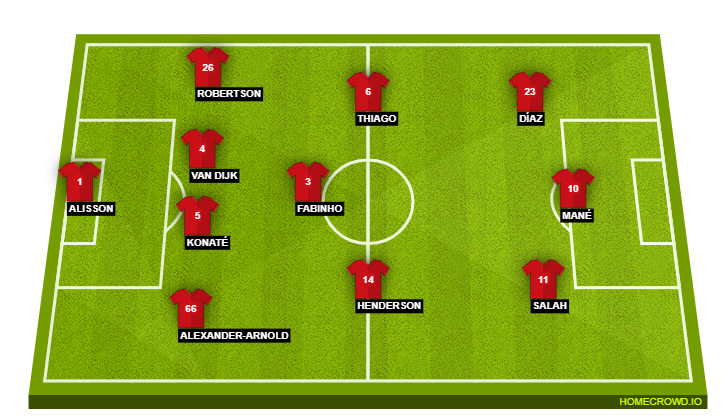 Like his counterpart in the Liverpool dugout, Unai Emery does not have any new injury concerns to deal with ahead of the trip to Anfield for the UEFA Champions League semi-final first leg. On Wednesday, the Villarreal manager will be bereft of the services of two first-team players.

Alberto Moreno and Gerard Moreno remain on the sidelines due to their respective hamstring injuries. The duo will likely miss the remainder of the season, meaning Emery will be short of quality options in the final third.

Moreno’s absence and Giovani Lo Celso’s advent since arriving from Liverpool have prompted Unai Emery to shuffle his formation slightly. The Villarreal manager will deploy Villarreal in a 4-3-1-2 formation against Liverpool, with Lo Celso having the freedom to roam across the final third.

The Argentine international will play off the central strikers Samu Chukwueze and Arnaut Danjuma, who will form the strike partnership for Villarreal against Liverpool. The three central midfielders will be crucial to Villarreal’s pursuit of continuing on their giant-killing run.

Dani Parejo will be Villarreal’s driving force from the middle of the park, providing the creative impetus from open play while posing a threat from set pieces. Francis Coquelin and Etienne Capoue will primarily have a defensive outlook, looking to curb Thiago Alcantara’s output while assisting the defenders in keeping Mohamed Salah & co. quiet.

Raul Albiol and Pau Torres will pair up at the heart of the Villarreal defence, with Pervis Estupinan and Juan Foyth being the two full-backs. The four defenders will cover Geronimo Rulli while retaining a compact shape to deny Salah, Sadio Mane and Luis Diaz. 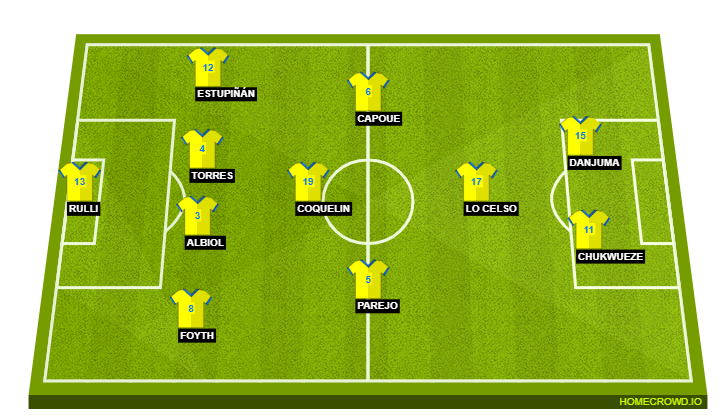 Thiago Alcantara has been a player reborn this season after finally shaking the cobwebs, becoming a pivotal figure for Liverpool. The Spanish international adds a new dynamic to the Reds’ gameplay when he is in his element, and he has transformed the Merseyside outfit into a more well-rounded team.

The 31-year-old will need to be at his best to slice open what will be a resolute Villarreal backline on Wednesday. If Thiago can perform at his best level, Liverpool might get close to booking their place in the UEFA Champions League final. If not, then Villarreal could continue on their giant-killing run.

One defining element in Villarreal’s big wins over Juventus and Bayern Munich has been their ability to shore up the defence efficiently. The Spanish giants will frustrate another bigwig, forcing Liverpool to find new ways to engineer the openings in the final third.

Villarreal’s clinical defensive outlook will take the game deep into the second half before one of the formidable attackers finally breaks the deadlock to hand Liverpool the edge going into next week’s second half. The Hard Tackle predicts Wednesday’s match to be a keenly contested affair, with Liverpool winning 1-0.