Barcelona will be eager to return to winning ways when they take on Real Sociedad at the Reale Arena on Thursday.

The 2021/22 La Liga season continues this midweek, with Matchday 33 culminating on Thursday. Four games will take place on the day, with Real Sociedad and Barcelona scheduled to bring the curtains down on the latest round of fixtures with their clash at the Reale Arena.

Real Sociedad’s 2021/22 campaign has ebbed and flowed throughout the season, with La Real blowing hot and cold since August. But Imanol Alguacil’s men are currently on a five-game unbeaten run dating back to early March, collecting 11 points from a possible 15 while remaining in contention for a top-four finish following results at the weekend.

On the other hand, Barcelona’s recent momentum threatens to come to a grinding halt after a run of one win in four games. During this period, Eintracht Frankfurt booted Barcelona out of the UEFA Europa League, while the defeat to Cadiz this past weekend has all but ended their slim La Liga title hopes. So while Xavi Hernandez had steadied the ship after a rocky start, the season could end in a disappointing fashion.

Barcelona won the reverse fixture 4-2 thanks to goals from Gerard Pique, Martin Braithwaite, and Sergi Roberto, with Julene Lobete and Mikel Oyarzabal scoring for Real Sociedad. Ahead of the latest meeting between the two sides, The Hard Tackle takes a closer look at the encounter.

Imanol Alguacil has a new roster issue hampering his preparations ahead of the visit of Barcelona. On Thursday, the Real Sociedad manager will be bereft of the services of five first-team players due to injuries or suspension-related problems.

David Silva is the latest absentee, with the veteran Spanish playmaker set to serve a one-match ban after being sent off against Real Betis last week. Silva has joined Nacho Monreal (knee), Mikel Oyarzabal (ACL), Ander Barrenetxea (hamstring), and Carlos Fernandez (knee) on the sidelines.

Silva’s absence means Alguacil could shuffle the formation slightly, moving to a 4-3-3 from a 4-4-2 diamond. The change of the system could force Alexander Isak to start out wide on the left flank instead of playing through the middle in a strike partnership with Alexander Sorloth.

Sorloth will thus spearhead the Real Sociedad attack against Barcelona, with Isak and Portu being the two wide attackers. The formation change will not affect the roles of the three midfielders, who will still aim to keep things tight in the middle of the park, with Rafinha Alcantara looking to move Real Sociedad forward at a quick tempo.

The former Barcelona midfielder will line up alongside Mikel Merino and Martin Zubimendi, with the latter reprising the anchor role. Merino will also mostly take up defensive duties, with Rafinha in charge of providing the forward thrust.

Joseba Zaldua and Diego Rico pick themselves as the two full-backs, with the duo solely responsible for providing the width in the final third. Igor Zubeldia and Robin Le Normand will pair up at the heart of the Real Sociedad defence, with Alex Remiro taking his place between the sticks. 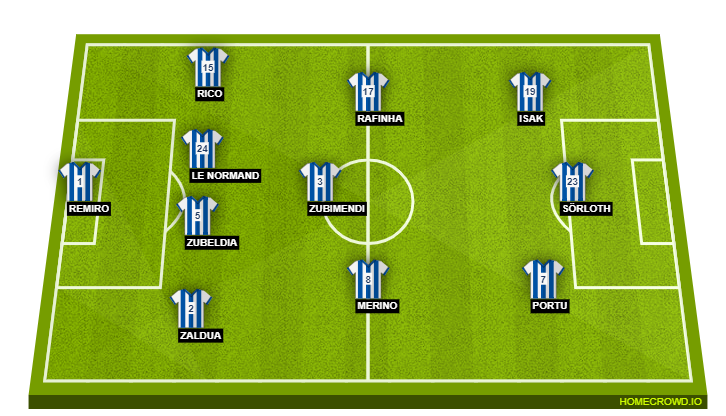 Unlike his counterpart in the Real Sociedad dugout, Xavi Hernandez has been handed a boost on the team news front ahead of the trip to the Reale Arena. On Thursday, the Barcelona manager will be without just three first-team players.

The good news is that Gerard Pique is in the travelling squad after overcoming physical discomfort. Ronald Araujo is also available to take on Real Sociedad after serving a suspension against Cadiz. The duo’s return means Pedri (hamstring), Sergi Roberto (knee), and Ansu Fati (hamstring) are the only absentees for Barcelona.

Roberto and Fati could be in contention to feature in the last few games for Barcelona, but Pedri’s season has come to a premature end. In the Spanish international’s absence, Gavi is a certain starter in the middle of the park alongside Sergio Busquets and Frenkie de Jong.

Pierre-Emerick Aubameyang should return to the starting eleven after featuring off the bench versus Cadiz. But the former Arsenal captain will be desperate to return to scoring ways after enduring a dry run in the last few games. Aubameyang will spearhead the Barcelona attack against Real Sociedad, with Ferran Torres and Ousmane Dembele being the two wide men.

Pique and Araujo should pair up at the heart of the Barcelona defence at the expense of Eric Garcia and Clement Lenglet, even though the former was decent enough versus Cadiz. Dani Alves will also return to the side, starting as the right-back, with Jordi Alba an automatic pick on the left flank. Finally, Marc-Andre ter Stegen will feature in the Barcelona goal versus Real Sociedad. 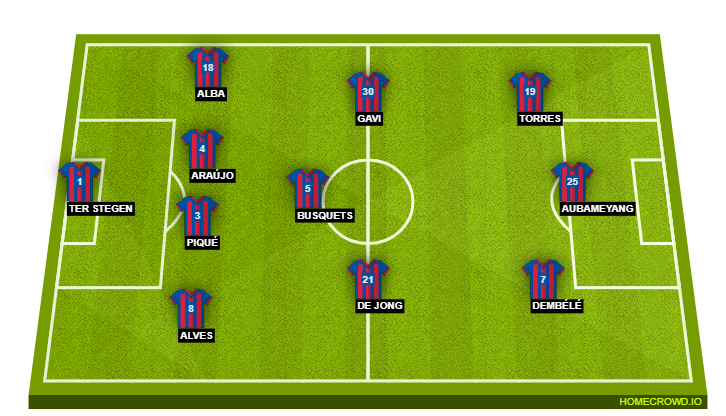 Aubameyang has fallen into old habits after making a strong start to his Barcelona stint. While the 32-year-old has scored six goals in his five away games in La Liga (he had failed to find the back of the net in his last nine outings on the road for Arsenal in the Premier League), he has looked the shell of a player he was in the first two months of his spell.

Aubameyang has scored only one goal in April, with his performance levels taking a sharp dip. With half a dozen games left in the season, Aubameyang needs to raise his game and show Xavi Hernandez that he can spearhead the Barcelona attack as the first-choice striker next season amid links with several centre-forwards, the latest being Gabriel Jesus.

After building a lot of momentum with a splendid unbeaten run, which included wins over Atletico Madrid, Sevilla, and bitter rivals Real Madrid, Barcelona could be about to end the 2021/22 season on a whimper. Xavi Hernandez’s men have nothing to play for except a top-four finish, which should be a formality unless things spiral out of control.

Barcelona will take heart from Imanol Alguacil’s poor record against them in La Liga as the Real Sociedad manager (D1 L6). But the hosts have been on a solid run since early March and will make things difficult for their visitors. The Hard Tackle predicts the two teams to play an evenly-contested affair which will end in a 1-1 draw.