Real Madrid have the opportunity to extend their lead at the top of the La Liga table to 18 points when they face Osasuna on Wednesday night at the El Sadar Stadium. Los Blancos are on course to win their 36th league title and are currently leading the table with 75 points from 32 matches.

Real Madrid are followed by Barcelona, who have undergone a resurgence under manager Xavi. But the gap between the two giants is huge and the Blaugrana’s defeat to Cadiz has further hampered their chances. But even with the title virtually in their bag, Carlo Ancelotti would not want his players to give Osasuna an inch in the encounter.

Real Madrid have won eight of their last ten La Liga encounters, losing one and drawing one. Their only defeat in this run came against Barcelona in El Clasico in March. Their most recent outing saw them come from two goals down to defeat Sevilla 3-2, with Karim Benzema scoring an injury-time winner.

Osasuna, on the other hand, are currently ninth in the league. They have won four of their last six league matches and come into this encounter on the back of two consecutive wins – a 1-0 victory over Alaves and 2-1 win over Valencia. Following their 11th-placed finish last season, Jagoba Arrasate’s side are looking to finish in the top half.

They are well placed to finish in the top half, with tenth-placed Valencia two points behind them and suffering a dip in form. Osasuna will have just one match left against an opponent placed above them on the table following the Real Madrid clash.

Jagoba Arrasate will be without the services of Jesus Areso, Kike Garcia and Juan Cruz due to their respective injuries. Midfielder Lucas Torro is suspended for the encounter, which will force the manager to make at least one change to the Osasuna XI that started in the 2-1 win over Valencia.

Arrasate will go ahead with a 4-3-3 formation in the hope that they can slow down Real Madrid’s title charge. Torro will be a big miss in the middle of the park, however.

Sergio Herrera will start in goal for the home team with Nacho Vidal, Aridane Hernandez, David Garcia and Manu Sanchez expected to start in the defence for them, with Sanhez slotting back in defence due to Torro’s absence.

Jon Moncayola, Oier Sanjurjo and Darko Brasanac will form the three-man midfield with Chimy Avila, Ante Budimir and Ruben Garcia starting in attack. The wide players will look to target Real Madrid’s full-backs and make the most of any spaces that they leave behind.

Carlo Ancelotti is set to be without Eden Hazard and Ferland Mendy due to the pair’s respective injuries. Marcelo, too, is ruled out for the Osasuna clash after picking up a knock in Real Madrid’s 2-0 win over Getafe earlier this month.

The Italian tactician will continue to employ a 4-3-3 that has served Real Madrid brilliantly this season. One of the midfield three sits back to shield the defence as the two full-backs provide width on either flank.

Thibaut Courtois will continue in goal, with a back four of Lucas Vazquez, Eder Militao, David Alaba, and Dani Carvajal. Carvajal will hope for a repeat of his second-half performance at left-back from the game against Sevilla. Casemiro served his suspension this past weekend but picked up a minor injury in training.

Meanwhile, Luka Modric is struggling with fatigue, which means neither the Croat nor Casemiro is available to take on Osasuna. So a remodelled midfield unit will feature Eduardo Camavinga in the anchor role, with Toni Kroos and Federico Valverde being the box-to-box midfielders.

Rodrygo Goes has scored in both of Los Blancos’ last two encounters, and he should earn a start on the right flank on Wednesday. Karim Benzema and Vinicius Junior are expected to continue in their usual roles, leaving Marco Asensio and Gareth Bale on the bench. 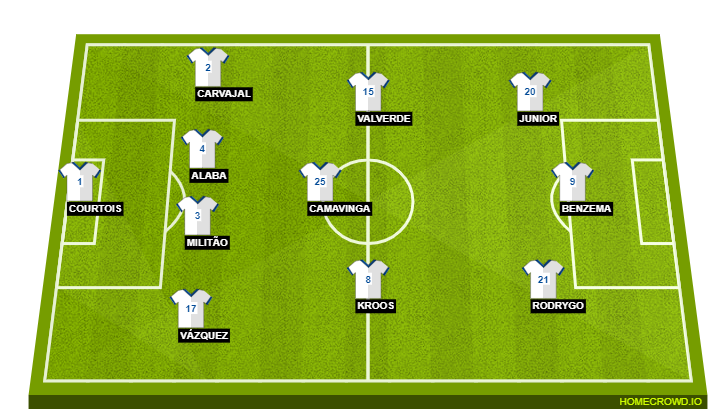 Karim Benzema has been in scintillating form for Real Madrid. The Frenchman has scored 39 goals this season across all competitions, and 25 in La Liga. He scored an injury time winner in Los Blancos’ 3-2 win over Sevilla in their last league match.

Benzema has scored eight goals in his last seven league appearances and will want to continue his goal-scoring form against Osasuna as well to take Real Madrid one step closer to the La Liga crown.

Carlo Ancelotti’s Real Madrid are on a roll currently and do not seem to be putting a foot wrong. Their 3-2 win over Sevilla after going two goals behind was proof that this side is not ready to give up easily.

With Karim Benzema in red-hot form and the likes of Vinicius Junior and Rodrygo Goes making valuable contributions, Los Blancos should get the job done at El Sadar. Expect them to come out on top with a 0-2 scoreline.