Manchester City will aim to retain the top spot on the Premier League table when they welcome Brighton & Hove Albion to the Etihad on Wednesday.

The 2021/22 season continues in all its glory, with the table starting to take its ultimate shape going into the campaign’s final month. As far as the Premier League is concerned, reigning champions Manchester City will be in action on Wednesday night when they play hosts to Brighton & Hove Albion at the Etihad Stadium.

Manchester City’s 2021/22 campaign thus far can be considered underwhelming, considering they failed to defend their Carabao Cup crown and crashed out of the FA Cup following the 3-2 defeat to Liverpool this past weekend. The Citizens are still alive in the Premier League and the UEFA Champions League, holding a one-point lead over Liverpool in the top flight. So hope remains for the season to end successfully.

On the other hand, Brighton & Hove Albion might have started picking up momentum at the right time. April has been kind on the Seagulls as they ended a six-game losing run earlier this month, albeit with an underwhelming stalemate against Norwich City. But Graham Potter’s men have picked up form in the last two games, beating Arsenal and Tottenham Hotspur on their travels to return to the top half.

Manchester City ran out 4-1 winners in the reverse fixture, with Alexis Mac Allister scoring a consolation goal for Brighton in the 81st minute. Ahead of the latest meeting between the two sides, The Hard Tackle takes a closer look at the encounter.

Pep Guardiola does not have any new roster issues hampering his preparations ahead of the visit of Brighton & Hove Albion. On Wednesday, the Manchester City manager will be bereft of the services of just two first-team players.

Kyle Walker is closing in on returning to the pitch after reaching the final stages of his recovery from an ankle injury. Cole Palmer is the only other absentee for Manchester City, with the young midfielder recovering from a foot issue. Another piece of good news is Gabriel Jesus being fit and available after sustaining a knock in the defeat to Liverpool.

But Jesus will unlikely keep his place in the starting eleven, with Riyad Mahrez in line to return to the side. Mahrez will take up the right-wing berth, with Jack Grealish expected to move to the left flank after reprising a central role against Liverpool. Raheem Sterling could move to the central striker’s berth, with Phil Foden an alternate option.

Kevin De Bruyne should have regained fitness to start in the middle of the park, where he will line up alongside Ilkay Gundogan and Rodri. The latter will reprise the anchor role, with Gundogan and De Bruyne getting the license to foray up the pitch.

Like De Bruyne, Ruben Dias should also be fit enough to return after recovering from an injury. Dias will likely start alongside Aymeric Laporte at the heart of the Manchester City defence, with Joao Cancelo and Oleksandr Zinchenko picking themselves as the full-backs. Ederson Moraes will return between the sticks after an underwhelming showing by Zack Steffen on the weekend. 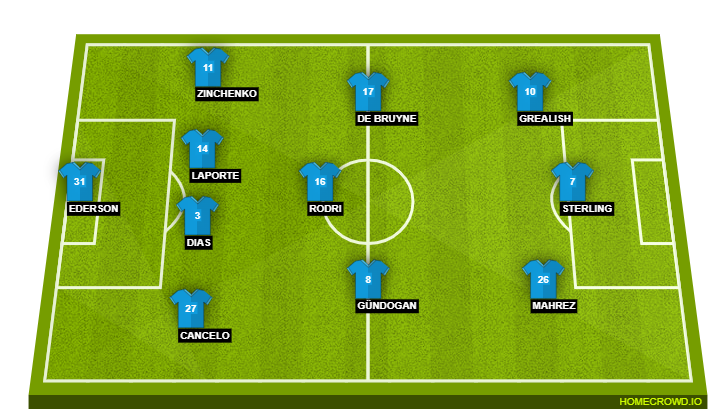 Unlike his counterpart in the Manchester City dugout, Graham Potter has a new roster issue to deal with ahead of the trip to the Etihad Stadium. On Wednesday, the Brighton & Hove Albion manager will be without three first-team players.

Yves Bissouma is serving a two-match suspension after picking up his tenth yellow card of the season. The Malian midfielder has joined Shane Duffy (thigh) and Jakub Moder (knee) on the sidelines. But there is some good news, as Potter confirmed in his pre-match press conference that Steven Alzate might be involved after recovering from an illness.

“Everybody came through the game ok. The only player missing is Yves Bissouma through suspension.

"We have played without him before and we’ve done ok. We’ve got players who are itching to play, it’s going to be exciting finding the right one to come into the team." #BHAFC pic.twitter.com/l9eyIH1ICV

However, Alzate might only make the bench, with Adama Lallana expected to come into the side in place of the suspended Bissouma. Lallana will sit at the base of the Brighton midfield, with Pascal Gross and Moises Caicedo being the box-to-box midfielder. Enock Mwepu will be the fourth option in the middle of the park.

But the Zambian international will reprise an advanced midfield role again, playing off Alexis Mac Allister, who seems to have usurped Danny Welbeck and Neal Maupay in the pecking order for strikers at Brighton.

Tariq Lamptey has shrugged off a knock and should retain his right wing-back berth, while Leandro Trossard is an automatic pick on the left flank after his recent exploits. That means Marc Cucurella will continue to reprise the central defensive role has excelled in, with Lewis Dunk and Joel Veltman completing the backline. Robert Sanchez will start in the Brighton goal against Manchester City. 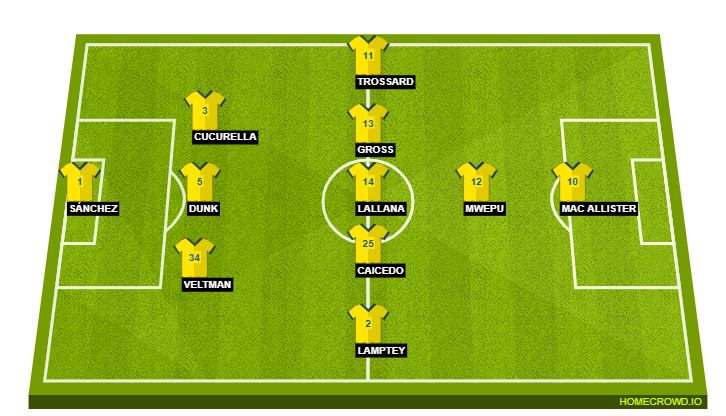 Manchester City’s defence has appeared vulnerable in the last few games, and it is no coincidence that the reassuring presence of Ruben Dias has been a major miss. The Portuguese international has now regained full fitness and will likely return to the starting eleven against Brighton & Hove Albion.

The Seagulls have appeared dangerous on the break in the last two games, and having Dias at the heart of the defence will likely elevate Manchester City’s defensive output. More importantly, Dias’s presence in the run-in will positively affect the Citizens as they look to retain their Premier League crown and win the elusive UEFA Champions League title.

Brighton & Hove Albion cannot be taken lightly, as Arsenal and Tottenham Hotspur found out the hard way. Manchester City will dominate the proceedings as they usually do, but the visitors will carry a significant threat on the break, particularly from the left flank, where Leandro Trossard is thriving.

With the attackers not scoring as consistently as required, Brighton might succeed in stretching the game till the second half. But the gulf in quality will ultimately prove too big to plug, meaning Manchester City will score quickfire goals to create some headway.

That said, Brighton will make the dying embers an interesting period by pulling a goal back. The Hard Tackle predicts a 2-1 win for Pep Guardiola’s men, which should enable them to remain on top of the Premier League irrespective of the result of the game between Liverpool and Manchester United.