Tottenham Hotspur will look to consolidate their place in the top four when they take on Brighton & Hove Albion on Saturday.

The business end of the 2021/22 Premier League season is underway, with Gameweek 33 starting on Saturday. The action kicks off in the capital, with Tottenham Hotspur playing hosts to Brighton & Hove Albion at the Tottenham Hotspur Stadium in the lunch-time kick-off.

Tottenham endured a rocky start to life under the tutelage of Antonio Conte. But the Italian tactician has imbibed his philosophy in the players, which has aptly reflected in the results. Spurs are one of the in-form teams in the Premier League, winning their last four top-flight fixtures to take the driver’s seat in the race to clinch a top-four finish.

On the other hand, Brighton’s strong start to the season seems like a distant memory, with the south coast club struggling to stitch together a run of positive results. However, the Seagulls are back in the hunt for a top-half finish after beating Arsenal at the Emirates last weekend. The victory ended a six-game winless run. The result has brought Graham Potter’s men level on points with tenth-placed Crystal Palace.

Tottenham and Brighton played the reverse fixture last month, with Spurs grabbing a 2-0 win thanks to goals from Cristian Romero and Harry Kane. Ahead of the latest meeting between the two sides, The Hard Tackle takes a closer look at the encounter.

🎙 “To lose players like Matt Doherty, Tanganga and Skipp is not easy for us”

Antonio Conte has been handed a blow on the team news front ahead of the visit of Brighton & Hove Albion. On Saturday, the Tottenham Hotspur manager will be bereft of the services of three first-team players due to various fitness issues.

Matt Doherty is the latest absentee for Tottenham, with the Irish defender sustaining a season-ending knee injury in last weekend’s win over Aston Villa. Doherty has joined Japhet Tanganga (knee) and Oliver Skipp (groin) on the sidelines, with the trio unlikely to feature again this term.

Doherty’s long-term injury layoff means Emerson Royal has a second chance to impress Conte amid links with Atletico Madrid. While Emerson has become an automatic pick in the right wing-back spot, Sergio Reguilon is a sure starter on the left flank, with the duo flanking Pierre-Emile Hojbjerg and Rodrigo Bentancur in the middle of the park.

Bentancur and Hojbjerg will look to quickly push Tottenham forward during transitions, with the latter having a penchant for linking up smartly with Harry Kane. Kane will often drop deep to link midfield with the attack while enabling Son Heung-min and Dejan Kulusevski to make bursts into the Brighton box.

As for personnel at the opposite end, Hugo Lloris picks himself between the sticks, with Cristian Romero, Eric Dier, and Ben Davies forming the central defensive partnership. Steven Bergwijn and Lucas Moura will be among the impact substitutes for Conte. 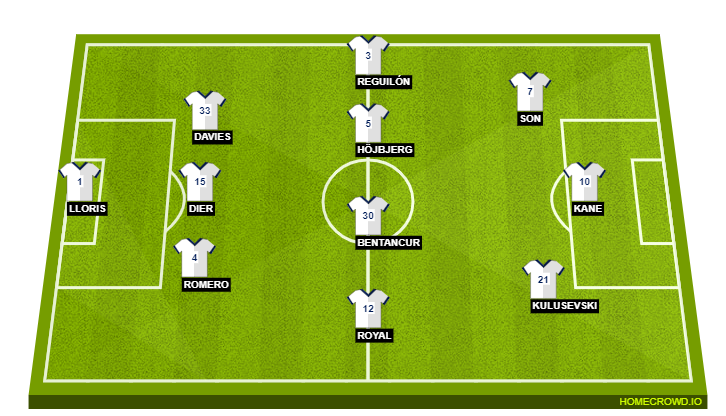 Unlike his counterpart in the Tottenham dugout, Graham Potter does not have any new roster issues hampering his preparations ahead of the trip to the Tottenham Hotspur Stadium. The Brighton & Hove Albion manager will be without three first-team players.

Jakub Moder is a long-term absentee due to a knee injury, while Steven Alzate remains on the sidelines because of an illness. Shane Duffy is the third absentee for Brighton, with the veteran defender recovering from a thigh issue.

"Steven Alzate's ill and Shane's suffering with his thigh, but otherwise we're as we were for Tottenham tomorrow." #BHAFC pic.twitter.com/EwDyYvHlL8

With Duffy still unavailable and Adam Webster unlikely to be fit enough to start, Marc Cucurella could line up in the back three again. The Spaniard has acclimatised to the role’s challenges well and will continue partnering with Lewis Dunk and Joel Veltman in the central defensive partnership, covering Robert Sanchez in the Brighton goal.

Tariq Lamptey should return to the starting eleven as the right wing-back, with Pascal Gross making way. But Leandro Trossard will likely retain his spot as the left wing-back, with the opportunity to attack from a wider position suiting the Belgian well.

With Trossard starting as the left wing-back, Danny Welbeck and Alexis Mac Allister should form the strike partnership again. The most crucial players against Tottenham will be the three central midfielders, with the trio of Enock Mwepu, Yves Bissouma and Moises Caicedo forming a combative midfield unit. 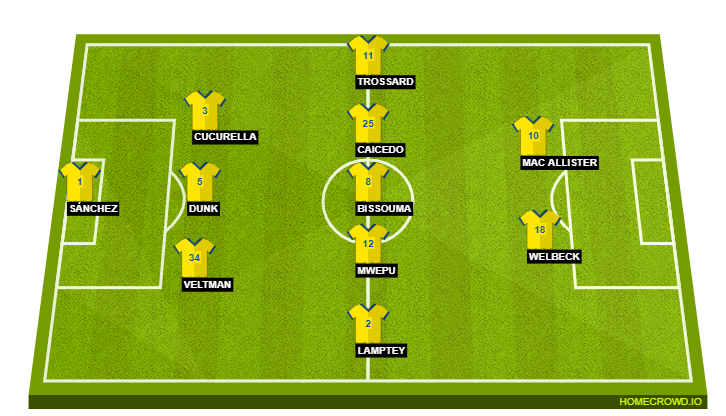 Mohamed Salah seemed to be the runaway leader in the race to win the Premier League Golden Boot this season. But the Liverpool talisman has endured an uncharacteristic slump in the last few weeks, which has enabled the chasing pack to catch up to a great extent. One such player is Son Heung-min.

The South Korean forward is within touching distance of Salah following his match-winning hat-trick against Aston Villa last weekend. Another game-changing performance could enable Son to equalise Salah’s tally, especially with the Egyptian involved in the FA Cup this weekend. Expect another Son masterclass in the final third.

Brighton should be buoyed after beating Arsenal at the Emirates last week. But overcoming the challenge of usurping an in-form Tottenham side could be a tall order for the Seagulls, especially with the Harry Kane-Son Heung-min partnership blossoming by the day.

Add to it the increasing impact of Dejan Kulusevski, and Spurs are the outright favourites to clinch all three points on Saturday. While Brighton will take the game to their hosts, Tottenham will come through unscathed eventually, with Hugo Lloris keeping a clean sheet and Son getting closer to Mohamed Salah’s tally for the season.