Barcelona will look to seal a safe passage through the UEFA Europa League semi-finals when they welcome Eintracht Frankfurt to Camp Nou on Thursday.

The UEFA Europa League is set to enter its penultimate stage later this month. But before then, the four semi-finalists need to be identified, which will be done on Thursday. Barcelona will aim to be one of the qualifiers when they play hosts to Eintracht Frankfurt in the second leg of their quarter-final at Camp Nou.

Barcelona took the scenic route to the UEFA Europa League knockout stages, finishing third in the UEFA Champions League Group E. The Blaugrana then had to get past Napoli to reach the Round of 16 in the Europa League before scraping past Galatasaray. As for Eintracht Frankfurt, Die Adler finished atop Group D before narrowly beating Real Betis in the Last 16 to set up the Barcelona date.

As for recent form, Barcelona’s splendid resurgence under Xavi Hernandez has been showing no signs of letting up. The Blaugrana last lost a game nearly three months ago, and they come into the game on the back of a come-from-behind 3-2 win over Levante that showed their character.

On the other hand, Eintracht Frankfurt’s unbeaten run had extended for over a month, with Die Adler winning four games while playing out four draws before it ended with a 2-1 defeat to SC Freiburg last weekend. Nonetheless, the largely positive run of results has kept Oliver Glasner’s men in contention to clinch European qualification while taking them to the Europa League quarter-finals.

Barcelona and Eintracht Frankfurt played out a 1-1 draw in the first leg last week, with Ferran Torres scoring a 66th-minute equaliser after Ansgar Knauff had put Frankfurt in front. Ahead of the latest meeting between the two sides, The Hard Tackle takes a closer look at the encounter.

Xavi Hernandez has been handed a double boost on the team news front ahead of the visit of Eintracht Frankfurt for the UEFA Europa League quarter-final second leg. On Thursday, the Barcelona boss will be bereft of the services of five first-team players.

The good news is that Memphis Depay and Sergino Dest are back in the matchday unit after recovering from their respective injuries. Xavi has also named Gerard Pique in the squad, but the veteran defender will unlikely be fit enough to take on Eintracht Frankfurt.

Samuel Umtiti (foot), Sergi Roberto (knee), and Ansu Fati (match fitness) remain on the sidelines, while Dani Alves is ineligible to play in the Europa League. In Alves’s absence, Dest could have a chance to return to the starting eleven straight away. But Ronald Araujo could get the nod at right-back after some impressive performances in the position.

With Pique unlikely to play, Clement Lenglet should retain his spot at the heart of the Barcelona defence, with Eric Garcia his central defensive partner. Jordi Alba will complete the defensive unit, which will cover Marc-Andre ter Stegen in the Barcelona goal.

Up ahead in midfield, Xavi Hernandez will likely stick with his strongest partnership, meaning Gavi will be on the bench. Pedri and Frenkie de Jong will be Barcelona’s creative midfielders against Eintracht Frankfurt, with Sergio Busquets sitting at the base and reprising the anchor role.

Ferran Torres has been in scintillating form lately and should start on the left flank, with the in-form Ousmane Dembele taking his place on the right wing. Pierre-Emerick Aubameyang should spearhead the Barcelona attack against Eintracht Frankfurt, with Luuk de Jong being an impact substitute. 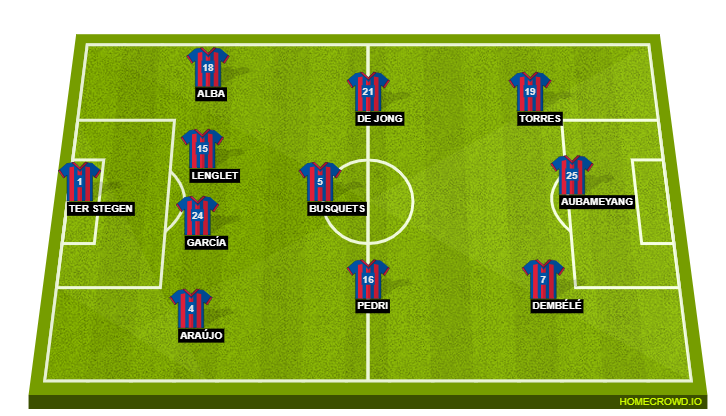 Like his counterpart in the Barcelona dugout, Oliver Glasner has greeted positive news ahead of the trip to Camp Nou for the UEFA Europa League quarter-finals. The Eintracht Frankfurt manager will be without three first-team players due to various roster issues.

The good news is that Djibril Sow has recovered from a knee injury and is part of the travelling squad to take on Barcelona. But Christopher Lenz (calf) and Diant Ramaj (knee) remain unavailable, while Tuta is suspended after seeing red in the first leg. But Lenz and Tuta have travelled with the rest of their Eintracht Frankfurt teammates to Barcelona.

Glasner should persist with his favoured 3-4-2-1 formation, with Eintracht Frankfurt being direct in their approach again. Kevin Trapp picks himself between the sticks, with Makoto Hasebe likely to replace the suspended Tuta in the central defensive unit. Martin Hinteregger and Evan Ndicka will complete the back three.

Ansgar Knauff and Filip Kostic will be the two marauding wing-backs, with the duo having the onus on them to provide width higher up the pitch. Sebastian Rode and Kristijan Jakic will look to keep things tight in the middle of the park, allowing the three attackers the freedom to express themselves.

Rafael Santos Borre will lead the line against Barcelona for Eintracht Frankfurt, with Daichi Kamada and Jesper Lindstrom playing off him. With Knauff and Kostic providing width in the final third, Lindstrom and Kamada will take up the central areas and look to heap the pressure on the vulnerable Barcelona centre-backs. 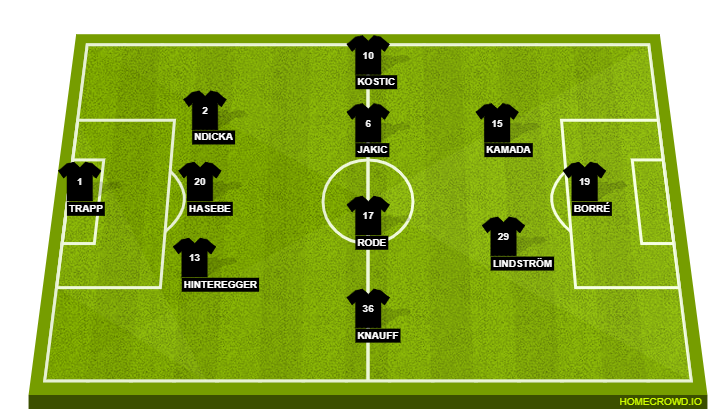 With Sergino Dest unlikely to start against Eintracht Frankfurt, Ronald Araujo will start as a right-back again for Barcelona. While the Uruguayan international is not a natural in the position, he has taken to it like fish to water, producing some impressive performances.

Araujo had his struggles against Filip Kostic last weekend but came through unscathed and eventually had the measure of the Eintracht Frankfurt wing-back. The Barcelona defender will need to produce a similar performance on Thursday to ensure Barcelona’s safe passage through to the UEFA Europa League semi-finals.

Eintracht Frankfurt showed last week that Barcelona should not take them lightly. And Die Adler will take the game to the Blaugrana again by making a blistering start to the game. A frantic kick-off should eventually pave the way for the tempo to simmer down slightly, which will play into Barcelona’s hands.

Pierre-Emerick Aubameyang and Ferran Torres should score to take Barcelona on the verge of qualifying for the UEFA Europa League semi-finals. But Eintracht Frankfurt will take the game into its dying embers with a strike in the second half before the hosts eventually scrape through with a narrow win. The Hard Tackle predicts an aggregate victory for Barcelona.