Liverpool will look to book a safe passage to the UEFA Champions League semi-finals when they host Benfica at Anfield on Wednesday.

The penultimate stage of the UEFA Champions League is nearly upon us, with the remaining two second-leg fixtures of the quarter-finals scheduled for Wednesday. Liverpool will play hosts to Benfica at Anfield, hoping to capitalise on their existing two-goal lead and progress to the semi-finals.

Liverpool reached the UEFA Champions League quarter-finals by first topping Group B ahead of Atletico Madrid before scraping past Inter Milan in the Round of 16. On the other hand, Benfica surprised everyone by pipping Barcelona to the second spot in Group E before beating Ajax in the opening knockout round.

Liverpool’s form in 2022 has been sensational, with the Reds losing just one game this year, an inconsequential 1-0 defeat to Inter Milan in the previous round of the UEFA Champions League. Jurgen Klopp’s men come into Wednesday’s clash on the back of a riveting encounter against Manchester City, which ended in a 2-2 draw.

As for Benfica, the Eagles have blown hot and cold lately, winning only five of their last ten games across all competitions. But Nelson Verissimo’s charges returned to winning ways this past weekend with a 3-1 victory over Belenenses SAD, with the in-demand Darwin Nunez scoring a match-winning hat-trick.

The first leg ended in a 3-1 win for Liverpool, with Ibrahima Konate, Sadio Mane, and Luis Diaz on target, while Nunez scored the goal that kept Benfica in the contest. Ahead of the latest meeting between the two sides, The Hard Tackle takes a closer look at the encounter.

We’re 𝐋𝐈𝐕𝐄 with Jürgen Klopp and @Alissonbecker as they look ahead to our #UCL quarter-final second leg against Benfica! 🎙#LIVSLB https://t.co/GTObic8Bod

Jurgen Klopp does not have any fresh roster issues hampering his preparations ahead of the visit of Benfica for the UEFA Champions League quarter-final second leg. The Liverpool manager will have a full-strength squad at his disposal on Wednesday.

Alisson Becker picks himself between the sticks, with Liverpool lining up in the usual 4-3-3 system in front of him. Ibrahima Konate should return to the heart of the Liverpool defence, replacing Joel Matip to be Virgil van Dijk’s partner. Trent Alexander-Arnold and Andrew Robertson are automatic picks as the two full-backs.

Up ahead in midfield, Naby Keita will likely get another chance to impress after a convincing performance in the first leg against Benfica. Keita should start in place of Jordan Henderson, with Fabinho sitting at the base of the midfield trifecta. Curtis Jones will likely complete the midfield unit, with Thiago Alcantara getting a rest ahead of another big game against Manchester City.

Mohamed Salah has not been at his best lately, but the Liverpool talisman will likely retain his spot on the right-wing. Luis Diaz should return to the left flank, with Roberto Firmino reprising his trademark false-nine role. Sadio Mane and Diogo Jota will be options on the bench. 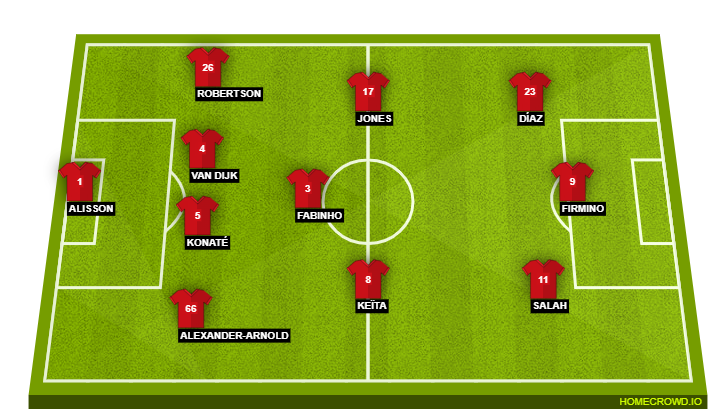 Like his counterpart in the Liverpool dugout, Nelson Verissimo does not have any new injuries to contend with ahead of the trip to Anfield. On Wednesday, the Benfica manager will be bereft of the services of two first-team players, with Rodrigo Pinho and Lucas Verissimo recovering from their respective knee issues.

In Verissimo’s continued absence, Jan Vertonghen and Nicolas Otamendi pick themselves to form the central defensive partnership. Gilberto Moraes Junior and Alejandro Grimaldo will likely be the two full-backs, with Odysseas Vlachodimos taking his place in the Benfica goal.

Up ahead in midfield, Julian Weigl and Adel Taarabt will have the onus on them to keep things tight in the middle of the park while facilitating smooth transitions. Rafa Silva and Everton will be the two wide midfielders, with the duo forming the second bank of four, which will aim to snuff out the half-spaces.

Silva and Everton will be direct in their approach from the flanks, looking to link up with the central striker Darwin Nunez, who will be the chief threat for Benfica. Goncalo Ramos will play off Nunez, with the 20-year-old providing the creative impetus from the central areas. 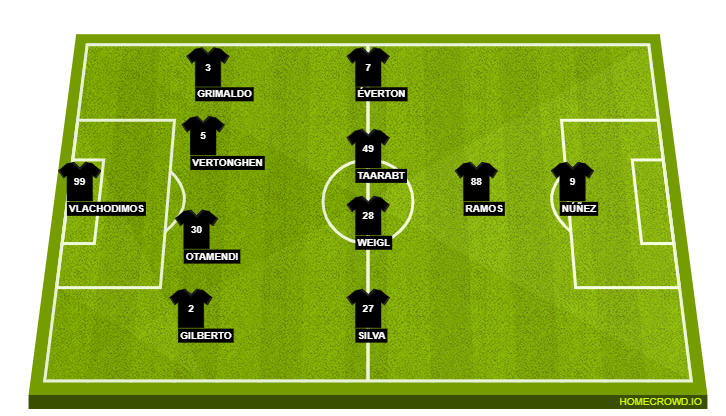 Keita’s fitness issues have bothered him this season, as they have throughout his stint with Liverpool. But the Guinean midfielder has been impressive whenever he has taken the pitch for the Reds this season, prompting Jurgen Klopp to hand him chances to make an impression whenever available.

With the Liverpool boss likely to give a few players a breather ahead of another crucial match versus Manchester City, Keita will get the chance to showcase his abilities. And if he can produce another convincing performance from the middle of the park, Keita will have sealed his place in important games for Liverpool.

Liverpool might be in a comfortable position heading into the second leg of their UEFA Champions League quarter-final against Benfica. But the visitors cannot be taken lightly, especially with Darwin Nunez being in the form of his life.

The Uruguayan striker will once again carry a significant threat and likely draw first blood to throw the tie wide open. But Liverpool should put the contest to bed with plenty of time left, booking their place in the Champions League semi-finals with a comfortable aggregate win.