Manchester United will hope to bounce back to winning ways when they take on Everton at Goodison Park on Saturday.

A little over a month remains for the 2021/22 season to end, and the business end is well and truly underway. Gameweek 32 kicks off in the Premier League with Newcastle United hosting Wolves at St. James’ Park. The action on Saturday begins at Goodison Park, where Everton will welcome Manchester United for a must-win match for both teams.

Everton’s campaign started controversially with the appointment of Rafael Benitez. The Spaniard’s reign lasted just half the season, with the former Liverpool boss leaving the Toffees languishing in the bottom half. Frank Lampard replaced Benitez in January and has since overseen a tough period for Everton.

The Merseyside giants are only a point ahead of 18th-placed Burnley following the 2-1 defeat to the Clarets earlier this week. Like the hosts, Manchester United’s season can be chalked off as underwhelming, to say the least. The Red Devils began the campaign with hopes of possibly challenging for the Premier League title.

But things have gone horribly wrong for Manchester United, with interim boss Ralf Rangnick unable to steady the ship, despite overseeing just three defeats in 21 games. The poor run of results has left United seventh on the table, albeit within touching distance of a top-four spot.

Everton came from a goal down to hold Manchester United to a 1-1 draw in the reverse fixture, with Andros Townsend’s 65th-minute strike cancelling Anthony Martial’s 43rd-minute opener. Ahead of the latest meeting between the two sides, The Hard Tackle takes a closer look at the encounter.

Frank Lampard provides a team news update ahead of #EVEMUN…

Frank Lampard has been handed a much-needed double boost on the team news front ahead of the visit of Manchester United. On Saturday, the Everton manager will be bereft of the services of six first-team players due to various injuries.

Donny van de Beek, who would have been ineligible to face parent club Manchester United anyway, is also unavailable due to a hamstring injury. Meanwhile, the returning pair of Keane and Allan should take their places back in the starting eleven straight away.

Keane should pair up with Mason Holgate at the heart of the Manchester United defence, with Ben Godfrey dropping to the bench after an abysmal performance against Burnley. Seamus Coleman will likely return too after recovering from an illness, with Jonjoe Kenny making way after a horror show in the midweek fixture. Vitaliy Mykolenko picks himself on the left flank.

Allan will star in the middle of the park alongside Abdoulaye Doucoure, with the duo getting the responsibility of keeping a lid on Bruno Fernandes and Paul Pogba’s outputs. Anthony Gordon and Alex Iwobi will aim to push Everton forward during transitions while also having defensive responsibilities.

Finally, Dominic Calvert-Lewin and Richarlison will form the strike partnership for Everton, with the former in desperate need of regaining his form. Salomon Rondon and Demarai Gray will be the backup attacking options on the bench. 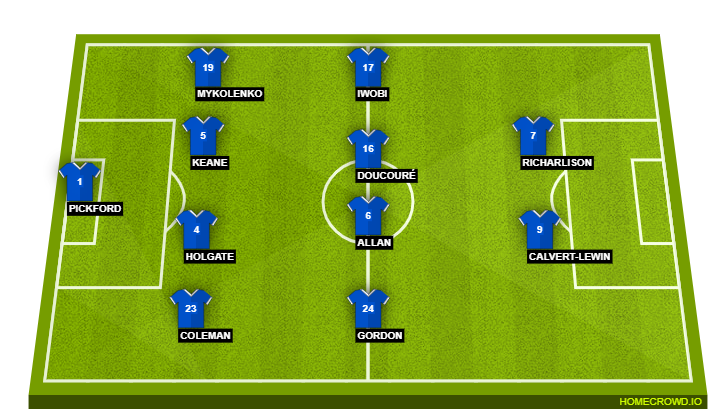 Like his counterpart in the Everton dugout, Ralf Rangnick has been handed a double boost on the team news front ahead of the trip to Goodison Park. The Manchester United manager will be without five first-team players on Saturday.

The good news is that Cristiano Ronaldo and Jesse Lingard have recovered from their respective illnesses to get back in contention to feature for Manchester United. But Scott McTominay is on the sidelines due to a foot injury, with the midfielder joining Luke Shaw (leg), Raphael Varane (knock), and Edinson Cavani (calf) in the treatment room.

Victor Lindelof and Harry Maguire are certain to pair up at the heart of the Manchester United defence in Varane’s absence. Alex Telles is another automatic selection, owing to the unavailability of Shaw, while Diogo Dalot should start on the right flank. David de Gea picks himself between the sticks.

Up ahead in midfield, McTominay’s absence will likely leave Fred as the sole holding midfielder in a 4-3-3 formation. Bruno Fernandes and Paul Pogba will likely reprise the creative midfield roles, with Nemanja Matic an alternative to Pogba if Rangnick chooses to be more conservating in his approach.

The fit-again Ronaldo will return to the starting lineup straight away, with Marcus Rashford likely to get a chance to impress after being overlooked against Leicester City last weekend. Jadon Sancho should complete the offensive unit, leaving Lingard and Anthony Elanga as backup attacking options. 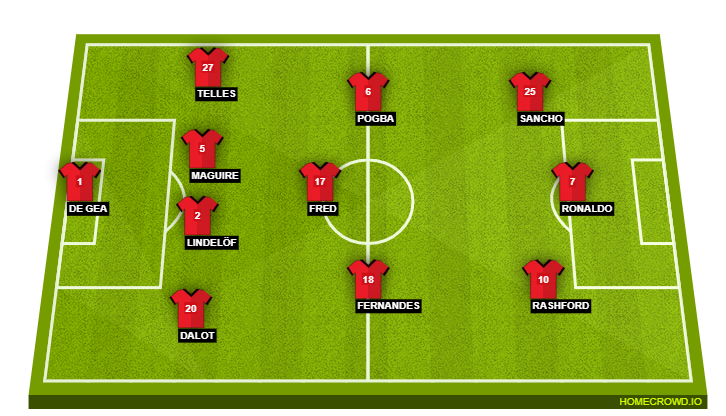 It goes without saying that the entire framework of a Manchester United eleven is built around Cristiano Ronaldo, even though it might not necessarily be feasible. The Red Devils are absurdly dependent on the Portuguese international, and his absence can have a major effect on their offensive output.

That was best felt against Leicester City last weekend, meaning Ronaldo’s availability to take on Everton is a massive boost for Manchester United. With the Toffees in all sorts of trouble, Ronaldo will have a good chance to boost his scoring tally and inspire Manchester United to get back to winning ways, thereby setting up the platform for a strong end to the season.

Sunday’s match will feature two teams that will be desperate for a win. Manchester United can remain alive in the top-four race by clinching all three points, whereas Everton can pull clear of the relegation zone by clinching a much-needed victory.

But Everton’s defensive frailties will constantly keep Manchester United in the picture to score goals. And even though the Red Devils tend to concede cheap goals, Cristiano Ronaldo and Bruno Fernandes should deliver the goods and guide Manchester United to a relatively comfortable win.