Barcelona will hope to take a step closer to the UEFA Europa League semi-finals when they take on Eintracht Frankfurt on Thursday.

The UEFA Europa League resumes this week with the quarter-finals of the 2021/22 season. All four first-leg contests will be played on Thursday. Barcelona will take the field at the Deutsche Bank Park, where they will lock horns with Eintracht Frankfurt.

2021/22 has been a hit-and-miss campaign for Eintracht Frankfurt. This season, the Eagles have not had it easy in the Bundesliga, with European qualification seemingly an uphill task, as they are five points adrift of sixth-placed Hoffenheim. But the UEFA Europa League has been kind to Eintracht Frankfurt.

Die Adler topped Group D of the Europa League by winning all six games in the group stage before beating Real Betis (3-2 on aggregate) in the Round of 16. On the other hand, Barcelona’s route to the quarter-finals has been scenic. They bowed out of the UEFA Champions League after finishing third in their group before beating Napoli in the knockout playoffs stage.

Barcelona then got past Galatasaray with a hard-fought 2-1 aggregate win to set up the Europa League quarter-finals against Eintracht Frankfurt. The Catalan giants are one of the most in-form teams in Europe, as they are currently on a 13-game unbeaten streak dating back to January 21. This run includes a 4-0 thrashing of bitter rivals Real Madrid, with Barcelona’s most recent game ending in a crucial 1-0 win over Sevilla.

Thursday’s fixture will be the first-ever instance of Eintracht Frankfurt and Barcelona facing off against each other. Ahead of the maiden meeting between the two sides, The Hard Tackle takes a closer look at the Europa League encounter.

Apart from Lenz, everyone’s healthy and fit. We’re looking forward to a great game tomorrow night. It’ll be a wonderful @EuropaLeague evening against top opponents. Everyone eligible is available and in the squad.” #SGEFCB #SGEuropa #UEL pic.twitter.com/YAkBwKsoGz

Oliver Glasner has been handed a major boost on the team news front ahead of the visit of Barcelona. On Saturday, the Eintracht Frankfurt manager will be bereft of the services of just one first-team player, with Christopher Lenz recovering from a calf injury.

The good news is that Martin Hinteregger will return to the starting eleven after missing the game against Greuther Furth due to a suspension. The Austrian defender will join Evan Ndicka and Tuta in the central defensive unit, covering Kevin Trapp in the Eintracht Frankfurt goal.

Filip Kostic will be Eintracht Frankfurt’s chief creative threat, lining up as the left wing-back. Ansgar Knauff will take his place on the right flank, providing width on his side. With Glasner likely to change the formation, Rafael Santos Borre will start alongside Daichi Kamada to form the strike partnership, meaning Jesper Lindstrom will drop down to the bench. 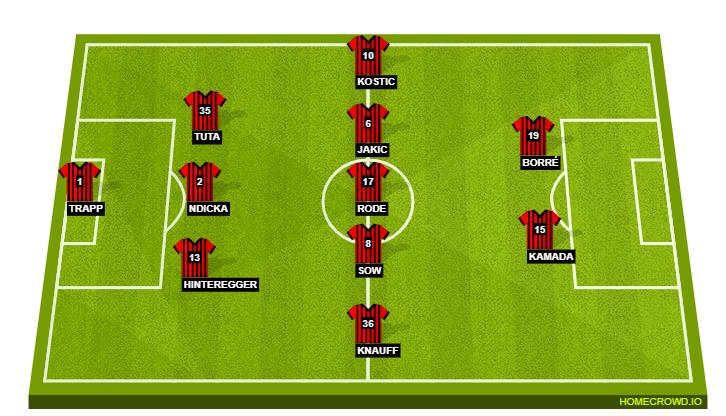 Unlike his counterpart in the Eintracht Frankfurt dugout, Xavi Hernandez has a new roster issue hampering his preparations ahead of the trip to the Deutsche Bank Park. On Thursday, the Barcelona manager will be without six first-team players in the UEFA Europa League quarter-final first leg.

Memphis Depay is the latest player on the sidelines after sustaining a hamstring injury. The Dutch international has joined Sergino Dest (hamstring) and Samuel Umtiti (toe) in the treatment room. Luuk de Jong is self-isolating after testing positive for COVID-19, while Dani Alves is ineligible to play in the Europa League.

Ansu Fati is also omitted from the travelling squad as he continues on his road to recovery. In the absence of Fati and Depay, Xavi has just three wide-attackers at his disposal in Ferran Torres, Adama Traore and Ousmane Dembele at his disposal.

Torres has played relentlessly for a few weeks and should get a breather, meaning Dembele and Traore should be the two wide men. Pierre-Emerick Aubameyang will spearhead the Barcelona attack, leaving Martin Braithwaite as a backup option on the bench.

Like Torres, Pedri has played without much rest lately and will likely start on the bench against Eintracht Frankfurt. Gavi and Frenkie de Jong will be the two box-to-box midfielders for Barcelona, with Sergio Busquets reprising the anchor role in the middle of the park.

As for the defensive unit, Alves and Dest’s absence means Ronald Araujo will start as the right-back, with Jordi Alba a certainty on the left flank. Gerard Pique and Eric Garcia will pair up at the heart of the Barcelona defence that will cover Marc-Andre ter Stegen between the sticks. 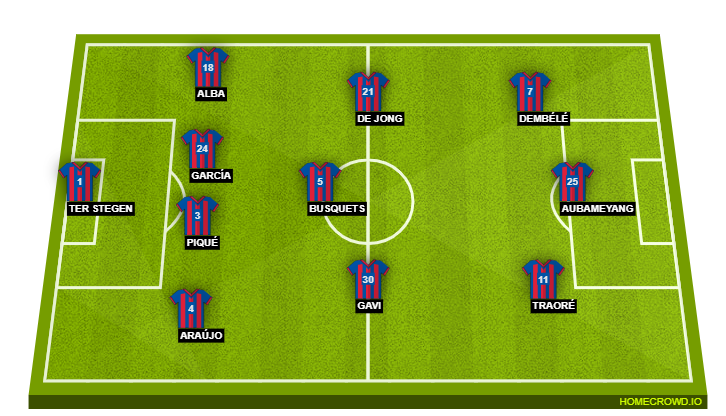 In recent weeks, a lot has happened at Barcelona, with sponsorship deals finalised and transfer plans getting cleared. On the pitch, it has been mostly positive news for the Blaugrana, with Xavi Hernandez’s men scoring goals for fun for the most part. But amid all that, one player has fallen down the pecking order and will be desperate to make an impression on Thursday.

Adama Traore made a stellar impact upon returning to Barcelona in the January transfer window. But Ousmane Dembele’s resurgence and Ferran Torres’s substantial impact have been detrimental to Traore’s fortunes. But the game against Eintracht Frankfurt could allow the Spanish international to make a meaningful impact and somehow win his place back in the side.

Barcelona might be one of the most in-form teams in Europe. But Eintracht Frankfurt’s home record in major European competition in the quarter-finals and beyond is undeniable, meaning a keenly-contested affair should ensue between the two sides.

Barcelona will likely take the lead in the first half through Pierre-Emerick Aubameyang, who will extend his solid record in the UEFA Europa League. But the hosts should put up a spirited performance in the second half, with Jesper Lindstrom coming off the bench to level the score. Thus, an intriguing second leg will be set, with Thursday’s clash ending in a 1-1 draw.