Everton will be desperate to return to winning ways when they take on Burnley in a relegation “six-pointer” at Turf Moor on Wednesday.

The 2021/22 Premier League season continues to take twists and turns with every passing week, and one could come this midweek in what will be a relegation “six-pointer”. On Wednesday night, Burnley and Everton will play one of their games in hand when they face off at Turf Moor.

Burnley’s 2021/22 campaign has been characterised by a spate of draws that have kept them in the relegation zone throughout the season. This term, the Clarets have won just three games while playing out 12 stalemates. While Sean Dyche’s men have lost fewer games than six other teams, four defeats in as many games heading into the midweek contest has halted their momentum.

As for Everton, the Toffees are two spots and four points ahead of Burnley, with both teams playing 28 games thus far. And like the hosts, the Merseyside outfit’s recent form has left a lot to be desired, as they have won just one of their last six Premier League games. As a result, Frank Lampard’s men have been unable to pull clear of the drop zone, sitting at 17th in the standings.

Everton came from a goal down to beat Burnley 3-1 at Goodison Park in the reverse fixture, with Michael Keane, Andros Townsend, and Demarai Gray on target. Ahead of the latest meeting between the two sides, The Hard Tackle takes a closer look at the Premier League encounter.

💬 "Ben won’t be fit yet, he's making progress but he's still got a bit to go. Vyds could get around it, he played 60 minutes the other day. The others are longer term."#BUREVE | #UTC pic.twitter.com/TawuNkgKGb

Sean Dyche has been handed a major boost on the team news front ahead of the visit of Everton. The Burnley manager will be bereft of the services of four first-team players on Wednesday due to various fitness issues.

The good news is that Nathan Collins is available after serving his one-match suspension against Manchester City this past weekend. Collins’s return means Ben Mee (knee), Johann Berg Gudmundsson (calf), Erik Pieters (knee), and Matej Vydra (knock) are the quartet on the sidelines.

In Mee’s absence, Collins should get a chance to make an impression at the heart of the Burnley defence, with James Tarkowski his central defensive partner. Charlie Taylor and Connor Roberts will be the two full-backs. Nick Pope will take his usual place between the sticks against Everton.

Dyche will likely revert to his preferred 4-4-2 formation on Wednesday after utilising a 4-5-1 system against Manchester City. With that in mind, Ashley Westwood and Josh Brownhill will be stationed centrally in the middle of the park, with the duo holding the fort in the midfield.

Aaron Lennon and Dwight McNeil should be the two wide midfielders for Burnley, with the duo carrying the creative responsibility against Everton. Maxwel Cornet and Wout Weghorst should form the strike partnership on Wednesday, with Jay Rodriguez and Ashley Barnes being the backup options on the bench. 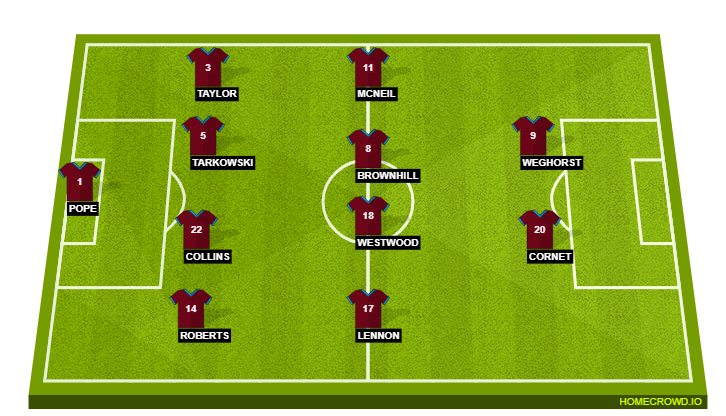 Unlike his counterpart in the Burnley dugout, Frank Lampard has a gamut of roster issues hampering his preparations ahead of the trip to Turf Moor. The Everton manager will be without eight first-team players on Wednesday.

Michael Keane is the latest player sidelined after being sent off against West Ham United last weekend. The English international will serve a one-match ban versus Burnley, joining Allan in the suspension quagmire. Nathan Patterson (ankle), Tom Davies (thigh), and Andros Townsend (knee) are long-term absentees.

Donny van de Beek has also been ruled out of #BUREVE with a thigh injury.

But there is some good news, as Seamus Coleman could be available after recovering from an illness. The Everton captain’s return means Yerry Mina (hamstring), Donny van de Beek (thigh), and Andre Gomes (knock) are short-term absentees for the Toffees.

Coleman might not start despite being in contention, meaning Jonjoe Kenny should be the right-back against Burnley. Vitaliy Mykolenko should be deployed on the opposite flank, while Ben Godfrey and Jarrad Branthwaite should form the central defensive partnership. Jordan Pickford will take his place in the Everton goal on Wednesday.

Up ahead in midfield, with Lampard likely to go ahead with the 4-4-2 formation, Everton will likely go toe-to-toe with Burnley in a similar system. Mason Holgate will get a role in midfield in the absence of Allan and Gomes, pairing up with Abdoulaye Doucoure in the middle of the park.

Anthony Gordon has been a rare positive for Everton in 2022, and the youngster will hold the key in the final third against Burnley with his directness. Demarai Gray will be the other wide-attacker, with Richarlison and Dominic Calvert-Lewin forming the strike partnership. 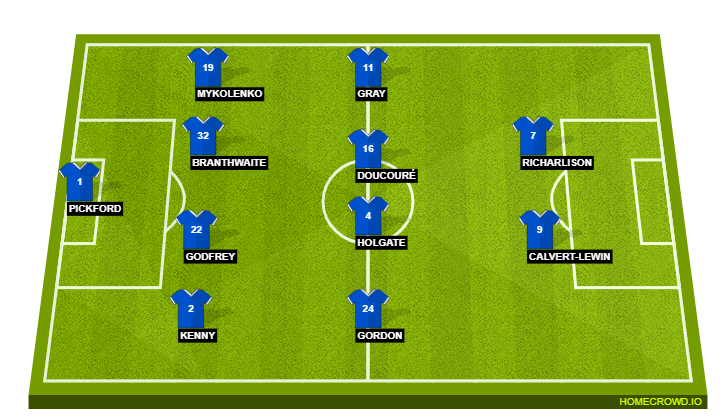 Dominic Calvert-Lewin and Richarlison would be Everton’s most dependable players in ideal circumstances. But the Toffees find themselves in an odd situation, with players either constantly on the sidelines or out of form. So the onus is on Calvert-Lewin – and Richarlison, in particular – to step up and guide Everton to safety.

The Brazilian international has the x-factor to conjure match-changing moments out of nothing. But that trait has been sorely lacking in his game for a long time. That said, if he can rediscover his best, there can only be one winner in the match between Burnley and Everton on Wednesday. If not, it will be another long outing for Everton.

The game on Wednesday pits the two worst teams on form in the Premier League against each other, and three points are of utmost importance for Burnley and Everton. The Toffees have the fewest points of any Premier League side in 2022 (6 – P11 W2 D0 L9) and are the only team yet to pick up a single point away from home, losing all five games.

They are also at rock-bottom in the Premier League away table, meaning Burnley will feel Everton might be there for the taking. The return of the 4-4-2 formation should pave the way for slightly more fluency in Burnley’s gameplay, and a beleaguered Everton side might leave gaping holes at the back.

But Everton will pose a constant threat at the opposite end, especially with Ben Mee missing due to an injury. The Hard Tackle predicts a keenly-contested affair at Turf Moor, with Burnley likely to come out on top with the odd goal in three on Wednesday.