Liverpool will hope to take a step closer to reaching the UEFA Champions League semi-finals when they take on Benfica on Tuesday.

The UEFA Champions League resumes this week with the quarter-finals of the 2021/22 season. The action kicks off with two simultaneous matches on Tuesday night, one of which will feature Benfica and Liverpool in the first leg at Estadio da Luz.

Benfica have been the surprise package of the 2021/22 UEFA Champions. The Eagles first ousted Barcelona from the group stage by finishing runners-up behind Bayern Munich before getting past an in-form Ajax in the Round of 16. On the other hand, Liverpool progressed to the knockout stages by topping Group B ahead of Atletico Madrid. The Reds then beat Inter Milan in the Last 16 to book the quarter-finals date with Benfica.

Benfica’s recent has been somewhat concerning yet positive. The Portuguese giants have lost only one of their last ten games, dating back to February 3. But that defeat came in their most recent outing, as they lost 3-2 to SC Braga in a blow to their preparations for the meeting with Liverpool.

Speaking of Liverpool, the Merseyside giants have lost only one game in 2022 and are currently on an 11-match winning run in the Premier League. Jurgen Klopp’s men’s only defeat was an ultimately inconsequential result, as they went down 1-0 to Inter Milan in their most recent Champions League outing.

Liverpool beat Benfica 4-1 the last time the clubs faced off against each other. Ahead of the latest meeting between the two sides, The Hard Tackle takes a closer look at the UEFA Champions League quarter-finals first leg tie.

Nelson Verissimo does not have any new injury concerns hampering his preparations ahead of the visit of Liverpool. On Saturday, the Benfica manager will be bereft of the services of only three first-team players in the worst-case scenario.

Lucas Verissimo is a long-term absentee due to a knee injury that has likely ruled him out for the remainder of the season. Rodrigo Pinho is unavailable due to a muscle injury, while Adel Taarabt is a major doubt because of an adductor issue.

With Taarabt’s availability up in the air, Joao Mario should pair up with Julian Weigl in the middle of the park. The central midfield duo will largely sit deep, with Weigl marshalling the first block of four that will aim to shut off the half-spaces for Liverpool to exploit.

The two wide midfielders, likely to be Rafa Silva and Everton, will thus need to be disciplined when off the ball, looking to negate the output of Liverpool’s two full-backs. Nelson Verissimo looks set to employ a 4-4-2 formation instead of the 4-2-3-1 he has recently preferred, with the two strikers aiming to keep the Liverpool centre-backs on their toes.

Darwin Nunez and Roman Yaremchuk will form the strike partnership, with the latter being a more traditional centre-forward in the pair. At the opposite end, the back-four will consist of Nicolas Otamendi and Jan Vertonghen at the heart of the Benfica defence, while Alejandro Grimaldo and Gilberto will be the two full-backs. 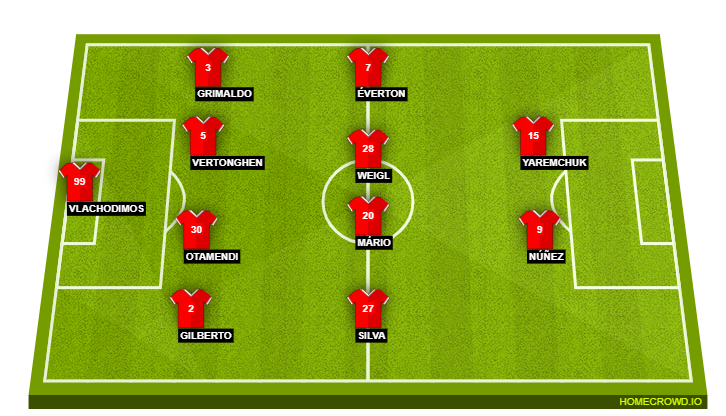 Unlike his counterpart in the Benfica dugout, Jurgen Klopp does not have any roster issues to deal with ahead of the trip to Estadio da Luz. The Liverpool manager will have a fully fit squad at his disposal for the UEFA Champions League quarter-final first leg.

Klopp had been sweating over the fitness of Curtis Jones and Naby Keita leading up to the clash with Benfica. But while Jones has shrugged off a minor ankle problem, Keita has overcome a knee injury to make himself available for Tuesday’s match-up.

In further good news, Trent Alexander-Arnold should be fit enough to start after making the bench against Watford this past weekend. The English international will replace Joe Gomez in the right-back slot, while Andrew Robertson will retain his place at left-back. Joel Matip and Virgil van Dijk will form Liverpool’s central defensive partnership, with Alisson Becker in goal.

Up ahead in midfield, Klopp should start with the first-choice trifecta of Jordan Henderson, Thiago Alcantara and Fabinho despite the upcoming potential Premier League title decided against Manchester City this coming weekend. Keita and Jones will be backup midfield options.

Finally, Klopp’s choices in the final third will make for an interesting pick, considering Sadio Mane and Luis Diaz were rested against Watford. The duo should join Mohamed Salah in the final third versus Benfica, with Salah looking to regain his sharpness after a sub-par display last week. 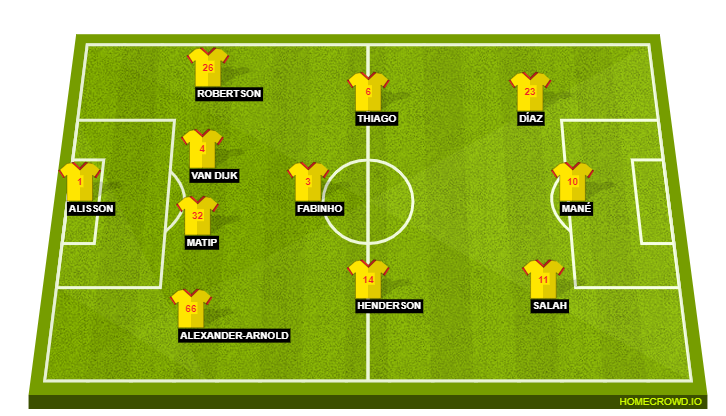 It is not every day that Mohamed Salah is the worst player on the pitch for Liverpool, but that was the case against Watford this past weekend. Instead of coming on the back of another heartbreaking loss to Senegal with a vengeance, the Egyptian forward appeared tired and demotivated.

Jurgen Klopp will want the Liverpool talisman back at his best heading into the season’s biggest game for the Reds this coming weekend. But another indifferent showing will leave the Liverpool boss with a lot to ponder before his side’s next fixture against Manchester City.

The game on Tuesday will likely be played in only one way, with Liverpool expected to hog the possession. With Benfica averaging 40% possession in the UEFA Champions League this season (the lowest of the eight remaining sides), the visitors will be direct in their approach.

But that should not throw Liverpool off Jurgen Klopp’s game plan, as even though they will have to slog it out, the Reds should come out on top, continuing the recent lopsided scoring record in matches featuring Portuguese and English teams. The Hard Tackle predicts a 2-0 win for Liverpool, although it will be interesting to see if Mohamed Salah regains his form on Tuesday.