Barcelona will aim to book their place in the UEFA Europa League quarter-finals on Thursday when they face Galatasaray at Nef Stadyumu.

The UEFA Europa League Round of 16 reaches its climactic end on Thursday, with almost every tie delicately poised. Barcelona will hope to qualify for the quarter-finals when they lock horns with Turkish giants Galatasaray at Nef Stadyumu in one of the four earlier games on the day.

Galatasaray reached the UEFA Europa League Round of 16 by topping Group E ahead of Lazio, Marseille and Lokomotiv Moscow. The Lions are in a decent run of form, losing just one of their last seven fixtures across all competitions, including an unbeaten run in February. Most recently, Domenec Torrent’s men claimed a hard-fought 2-1 win over Besiktas in the Super Lig.

On the other hand, Barcelona took the long route to the Europa League Last 16. The Blaugrana finished third in their UEFA Champions League group behind Bayern Munich and SL Benfica. That set up a knockout playoffs tie against Napoli, with Barcelona beating the Partenopei 5-3 on aggregate.

The Catalan giants are one of the most in-form teams in Europe at the moment, as Xavi Hernandez has got his team playing an eye-catching brand of football. Barcelona’s current ten-game unbeaten run dates back to January 21, and they warmed up for the crucial Europa League clash with a 4-0 demolition of Osasuna last weekend.

The reverse fixture ended in a goalless draw that was bereft of quality, with Barcelona lacking the intensity they showed in the win over Osasuna, much to Xavi’s delight. Ahead of the latest meeting between the two sides, The Hard Tackle takes a closer look at the Europa League encounter.

Domenec Torrent does not have any new injury concerns hampering his preparations ahead of the visit of Barcelona for the decisive UEFA Europa League clash. On Thursday, the Galatasaray boss could be bereft of the services of six first-team players.

Former Barcelona attacker Arda Turan remains unavailable due to a long-term injury. At the same time, Kaan Arslan, Halil Dervisoglu, Ismail Cipe, Baris Yilmaz and Alpaslan Ozturk will likely miss out versus Barcelona after being uninvolved in Galatasaray’s game against Besiktas on the weekend.

Torrent should prefer a 4-2-3-1 formation, even though he could run the risk of being overloaded in midfield. The Galatasaray manager could task the wide-attackers to converge when off the ball to create a midfield quintet during turnovers, providing the central midfielders in the double-pivot more support.

Kerem Akturkoglu and Emre Kilinc will thus have to pull off double duty on Thursday, even though the onus will be on Taylan Antalyali and Berkan Kutlu to keep things tight in the middle of the park. Sofiane Feghouli will have a free role higher up the pitch and will also direct the press quickly after losing possession.

Mostafa Mohamed should spearhead the Galatasaray attack, getting the nod over Bafetimbi Gomis to lead the line for his side. Ryan Babel, who should be available after shrugging off a knock, will be a backup attacking option on the bench for Torrent.

Barcelona loanee Inaki Pena should get the nod between the sticks over Fernando Muslera. Marcao and Victor Nelsson will likely pair up at the heart of the Galatasaray defence, with Sascha Boey and Patrick van Aanholt are expected to be the two full-backs. 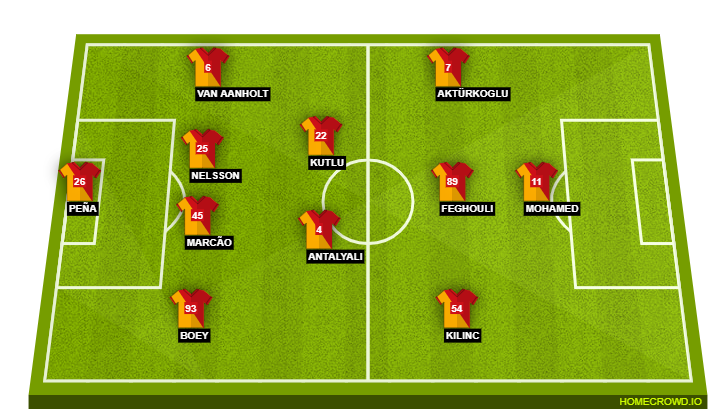 Unlike his counterpart in the Galatasaray dugout, Xavi Hernandez has been handed a major boost on the team news front ahead of the trip to Nef Stadyumu. The Barcelona manager will be without four first-team players on Thursday.

The good news is that Gerard Pique is fit and available after recovering from a knock he sustained in the game against Osasuna last weekend. Pique’s availability leaves Ansu Fati, Sergi Roberto and Samuel Umtiti as the only players sidelined due to injury. At the same time, Dani Alves misses out due to his ineligibility in the UEFA Europa League.

Alves’s absence means Sergino Dest will start as the right-back for Barcelona, with Jordi Alba a certain starter on the left flank. Pique could miss out despite being available, keeping the upcoming El Clasico this weekend in mind. Ronald Araujo and Eric Garcia should thus form the central defensive partnership, with Marc-Andre ter Stegen starting in the Barcelona goal.

Up ahead in midfield, Gavi could retain his spot after an impressive performance against Osasuna. Gavi’s selection in the middle of the park means Pedri might miss out, with Frenkie de Jong and Sergio Busquets being the other two midfield personnel.

As for the offensive unit, Xavi has all his resources at his disposal apart from Fati. Pierre-Emerick Aubameyang is an automatic pick to spearhead the Barcelona attack, with Ferran Torres and Ousmane Dembele likely to get the nod over Adama Traore and Memphis Depay following displays on the weekend that drew praise from Xavi. 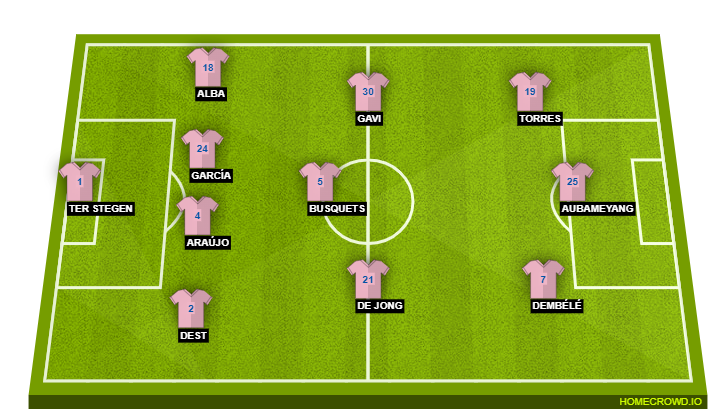 Ferran Torres has not had it easy since joining Barcelona from Manchester City earlier this year. While the Spanish international has made some important contributions in the final third over the last couple of months, he has tended to blow hot and cold. As a result, Torres is yet to establish himself as the undisputed first-choice option in the Barcelona attack.

The latest example of his inconsistency came in the first leg against Galatasaray last week. But Torres was back to his best in the big win over Osasuna, showing that he has a lot to offer. Likely to start on the left flank ahead of Memphis Depay, the 22-year-old will have to keep his levels high again to overcome a tough Turkish test for Barcelona.

Xavi Hernandez has reiterated time and again that intensity is the key for Barcelona to win games consistently. That vigour went missing for the Blaugrana in the first leg, but they should be on top of their game from the word go on Thursday.

That said, Galatasaray could be in business if Xavi Hernandez rests Gerard Pique, taking the game to their visitors. But Barcelona should have more than enough quality to overcome the Lions, with Ousmane Dembele and Pierre-Emerick Aubameyang likely to be the shining lights. The Hard Tackle predicts a hard-fought 3-1 win for Barcelona.